The first Carlton player to wear No.52 in the senior team.... 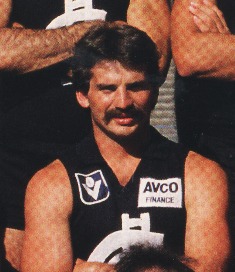 
Neil Gaghan had an extensive career in the lower grades at Carlton, beginning with the Blues’ Little League team when he was nine years old in 1974. Later, after playing his junior football with northern suburbs clubs Fawkner and Moomba Park, Neil was invited back to Carlton for a trial with the Under-19 squad in 1980, and stayed for seven seasons.

Gaghan won promotion to Reserve grade in 1981, wearing guernsey number 53. He switched to number 52 in 1983, and then to number 42 for his final year with the Blues in 1986. Earlier, after a three-season apprenticeship, he had been selected for his first senior game against Collingwood at Waverley Park in round 11, 1985. Playing across half-back alongside Ken Hunter and Tom Alvin, Neil racked up 23 possessions in an impressive debut. However, he wasn’t able to build on that solid start and, after two more senior games, spent the rest of the season with the Reserves.

Gaghan played the entire 1986 season with Carlton seconds without earning a recall, but at least he enjoyed some success with his prominent role in Carlton's 1986 Reserves Premiership. Meanwhile, the AFL were busy expanding the competition by establishing the competitions’ newest club - the Brisbane Bears - at Carrara on the Gold Coast. As part of that process, the League decreed that each of the other league teams were required to release two or more players to build the core of the team.

Gaghan was one of Carlton's nominations, and with hopes of restarting his stalled career, he agreed to the proposition. After shifting north, he played three games as the Bears endured a difficult birth, only to one of the many cut from the list at year’s end. By then, Neil had taken a liking to life in the Sunshine State, so he settled in Brisbane, where he joined the Kedron-Grange Football Club and gave them good service for a number of seasons.

In 1993, Gaghan took on the role of coaching Kedron-Grange, where he was ably assisted by two high-profile ex-Blues in Jim Buckley as part-time football manager, and Wayne Johnston as the club's star recruit. But only three weeks into the season, Gaghan was forced to step down from his role because of work commitments, and Johnston was appointed captain-coach.

Neil's younger brother was an outstanding prospect as a junior, and would have been eligible to go to Carlton from one of the Blues' prime recruiting zones. Sadly, he was killed in his mid-teens in a car accident on the Hume Highway.

1985 - Equal 4th in the Gardiner Medal (Best and Fairest in the VFL Reserves Competition).
1986 - Reserves Premiership