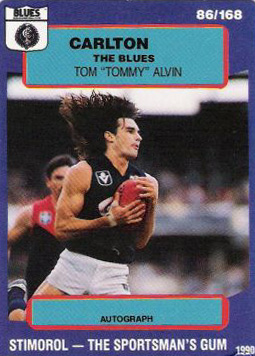 Tom Alvin was recruited by Carlton in 1984 from the strong Latrobe Valley club Bairnsdale, where he had developed into an outstanding country footballer under the guidance of his coach; ex Blue Trevor Fletcher. Fletcher placed a lot of faith in the club's youth, and Alvin was one of the main beneficiaries. To this day Tom credits Fletcher as being one of the greatest influences in his career, while Bairnsdale won a Premiership in 1981 with Alvin playing a key role. By 1983, the 21 year-old had been tied to Footscray for a season or two, but when his contract lapsed, Carlton believed in his potential and offered him a second chance at a league football career. It was a winning punt by the Blues, and Alvin was eventually able to play for the team that he followed avidly throughout his childhood. Wearing guernsey number 31, Tommy turned into a popular, consistent and long-serving defender who was an integral member of three Carlton Grand Final teams.

Easily distinguished on the field by his long, shoulder-length hair, Tom said later that he rarely visited a hairdresser because the males in his family had a history of premature baldness, and he wanted to flaunt his locks while he still had them. "Eventually I may have my hair cut," he said; "but it won't be because it hinders my football." That it certainly did not. By the end of his first VFL season Alvin was a fixture on one half-back flank in a strong Carlton team that made the finals, but couldn't do better than fourth, followed by fifth in 1985.

In 1986, David Parkin was replaced as Carlton coach by Robert Walls, who saw in Tom Alvin something other than a gifted defensive flanker. At 183 cm and 81 kg, with surprising pace, good hands and superb concentration, Tom became more of a true utility. Often ruck-roving or pushing forward to kick handy goals, he had a wonderful season and was selected in the Victorian State team. In September he ran onto the MCG for his first Grand Final, only to have the day end in bitter disappointment as the Blues went down to Hawthorn by 42 points.

That heavy defeat was the spur for Carlton's sweet revenge in 1987. The Blues dominated the home and away rounds to finish on top of the ladder, then demolished Hawthorn in the Grand Final by 55 points to claim our 15th flag. Tom started in the back pocket and was a rock all day in a watertight Carlton defence, doing a superb job in tagging the Hawks trump card Gary Buckenara virtually out of the game.

Alvin's third and last Grand Final appearance in 1993 was not so joyous. Carlton was simply no match for young, vigorous and switched-on Essendon team. In a Carlton side with few real winners, Tom was sent everywhere to try to stem the tide, and won many admirers for his grit against the odds.

After 218 games that produced 95 goals, Tom Alvin retired from league football following the 1994 season. In his eleven year career from 1984 to 1994 he represented Victoria on six occasions. After leaving Princes Park, he went on to captain-coach VFA club Sandringham in 1995, and in 1999, was elected to the Carlton Hall of Fame.

The single image in my mind of Tommy Alvin takes place in 1986 in a game against the Swans at the SCG. Tommy is running the lines (as was he wont to do) when a Swans player, Tony Morwood, grabbed hold of Tommy's long locks and dragged him to the ground.

Worse was to follow, as the umpire - with the wisdom reserved for umpires and fools - paid a free kick to Morwood, deeming the hair pulling tackle legal and therefore, Tommy was caught holding the ball.