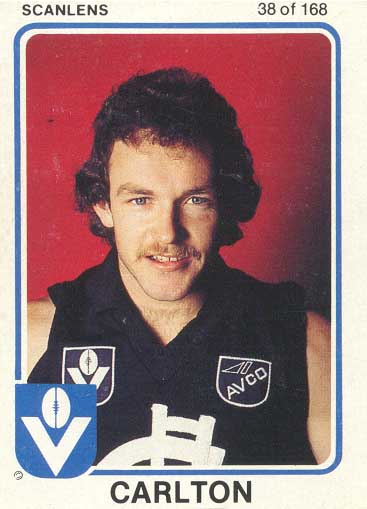 Jim (more often Jimmy) Buckley was one of the leaders of The Party Boys. Not the rock band, but the hard-training, hard-playing and hard-partying champion Carlton football team of the late seventies and early eighties. Perhaps the most talented side in the Blues' history, it featured great players like Wayne Johnston, Alex Jesaulenko, David McKay, Mike Fitzpatrick, Mark Maclure, Rod Ashman, Ken Sheldon, Wayne Harmes and a dozen others. This team won three flags in four years, and a fabled reputation for their regular celebrations.

Jimmy was a country boy from Kyneton who only ever wanted to be a jockey until he grew a bit too big. Just big enough to make an impact in junior football as a tough, confident and talented centreman who caught the eye of Carlton's scouts. After kicking 6 goals in a night match for the Blues, Jimmy played his first senior game in guernsey number 16 at the tender age of 16 years, 6 months and 18 days in 1976, making him the equal-youngest Blue of all with Ted Pollock, who had started his career at the same age in 1930. At 175 cm and 72 kg Jimmy was a natural rover, but it took him a couple of seasons to establish a regular place in a powerful Carlton team well-stocked with similar types.

The 1978 season began in turmoil for the Carlton Football Club, when newly-appointed coach Ian Stewart suffered a stroke just three games into the year. Club stalwart Sergio Silvagni stepped in as a caretaker, until Alex Jesaulenko took the reins as captain-coach six weeks into the season. Carlton had won just one game by then, and were languishing at the bottom of the ladder.

Jezza decided that tough times called for tough measures. He stepped up training, and demanded discipline from every player on the list. He was looking for strength or weakness in all and was quite ruthless in his demands. The team responded, and in a remarkable effort, the Blues made the finals. One of the shining lights in that revival was Jimmy Buckley. Jezza's methods and attitude struck a chord with the kid from Kyneton, who responded to his coach's challenge to be a key member of the team by season's end. And not just on the field.

Jezza recognised that with all the punishing training, the players needed the chance to let off some steam. So, with his blessing, the team had begun regular Saturday night outings after home games, or Sunday afternoon gatherings in the social club after training. At each and every one of these occasions, Jimmy was there with bells on. The first to arrive, and often the last to leave, he partied the way he played, then trained the way he partied. And the team bonded around him.

When season 1979 began, the Blues were close-knit and confident. By then in his fourth year as a senior player, Jimmy was a fixture in the side and developing into a leader; cocky and brash, yes - but also very much the team-man. Carlton lost just three games in the entire season on the way to meeting - and beating - Collingwood by 5 points in the Grand Final. The celebrations were understandably, epic.

Only a matter of weeks later, Carlton was rocked again when President George Harris was voted out of office, and Jezza honoured his pledge to resign if George lost. Popular long-serving ruckman and legendary club character Peter "Percy" Jones took over as coach for 1980, but found the task of leading his former team-mates beyond him. Carlton made the finals but were bitterly disappointing, being beaten in straight sets. Exit Percy Jones.

Under new President Ian Rice, Carlton's committee searched long and hard for the right man to coach the wayward Blues in 1981. They settled on Hawthorn Premiership mentor David Parkin, whose methodical approach proved to be precisely what was needed. His attitude to the social activities of the players may have been tolerant rather than encouraging, but he was well aware of the benefits. The Party Boys responded brilliantly to Parkin and the Blues finished on top of the ladder. They thrashed Geelong by 40 points in the second Semi Final, and met Collingwood in the decider. The Blues trailed at half time, but lifted in the third quarter, led by their rovers Ashman and Buckley. Jimmy's classy goal just before three-quarter time cut the deficit to nine points, and the Blues were charging home. Collingwood buckled in the final term and the Blues were Premiers again by 20 points. It was party time at Princes Park yet again.

Parkin's rigid discipline had one aim in season '82 - to prevent the inevitable Premiership hangover. Despite a couple of early losses, Carlton played well when it mattered and finished the home and away rounds in third place. Displaying all their big-match experience, they demolished Hawthorn by 58 points in the Qualifying Final, only to be beaten comprehensively by traditional rivals Richmond in the second Semi. Suddenly, it was crisis time.

To earn another crack at the Tigers, Carlton had to beat Hawthorn again in the Preliminary Final. This they did comfortably, but went to the MCG on Grand Final day as rank underdogs. The match evolved into a typically tough, bruising encounter. Richmond were 11 points up at half-time, but some astute moves by Parkin and a brilliant second half by Wayne Johnston sealed a fabulous Carlton win by 18 points. Despite suffering from glandular fever in the second half of the season, Jimmy Buckley was again among the Blues' stars, and topped off the most successful year of his career with state team selection, as well as Carlton's Best and Fairest award. All of which had to be appropriately celebrated, of course.

Buckley's outstanding form continued throughout 1983, when he was Carlton's best player in the losing Elimination Final to a strong Essendon team, before the rumour mill began suggesting that Jimmy might have been about to leave Princes Park for a better deal at the Dons. But he quickly refuted that conjecture, stayed true to the Blues, and along with Wayne Johnston, recorded the most Brownlow votes for Carlton in 1984. However, the years 1985 to '87 were not so fruitful for Buckley, with injury and a loss of form seeing him play less than 20 games in this period, although he did captain the Reserves side to a Premiership win in 1987 (when he was also an emergency for the victorious senior team). Even though these were lean years, at the start of the 1986 season, Buckley was chased by the cashed up Sydney Swans but he elected to stay loyal and stick with his beloved Blues.

Finally free of injury, Buckley completed a remarkable comback in 1988, when he transformed himself into an effective back pocket - consistently being named in Carlton's best players, and making the Victorian state squad again. After being injured late in the year, he missed Carlton's second Semi Final loss to Hawthorn, and was then controversially left out of the squad for the Preliminary Final against Melbourne. Carlton's selection panel preferred Mick Kennedy to mind Melbourne's dangerous goalsneak Ricky Jackson, but the move backfired and Jackson kicked five goals in a match-winning performance.

Persistant injuries dogged Jimmy for the remainder of his career. He didn't make it on to the park for Carlton's senior team at all 1989 and finished up after just six more matches in 1990 - mainly in the forward pocket. His last game was played off the bench against Collingwood at VFL Park, Waverley, in round 15. An appropriately huge crowd of more than 76,000 was there to send him off, but sadly the Blues couldn't top off his marvellous career with one more win.

Buckley's long, but injury-struck career at Carlton yielded 164 games and 146 goals. He later coached a number of country and suburban clubs (including North Ballarat in 1991) while maintaining a close and loyal attachment to the Navy Blues. Still a regular at club functions and a willing worker for support organizations such as the Spirit of Carlton, Jimmy Buckley will always be regarded as a larrikin, a party animal, and one of the greats of Carlton's golden era.

Bendigo All Stars Team (1972-1997).
In 1997 the Bendigo FL compiled their best team for players originating from the BFL VCFL zones for the period from 1972 - 1997, Buckley was named on the half-forward flank in that team.

In 1993, Jim was serving as part-time football manager at Brisbane club Kedron-Grange when he convinced Blues legend Wayne Johnston to play for the club. At the time, the Lions were being coached by another former Blue in Neil Gaghan.

The gift that keeps on giving also provided Dylan Buckley, Jim's son, who committed to join the Blues for season 2012 and beyond.