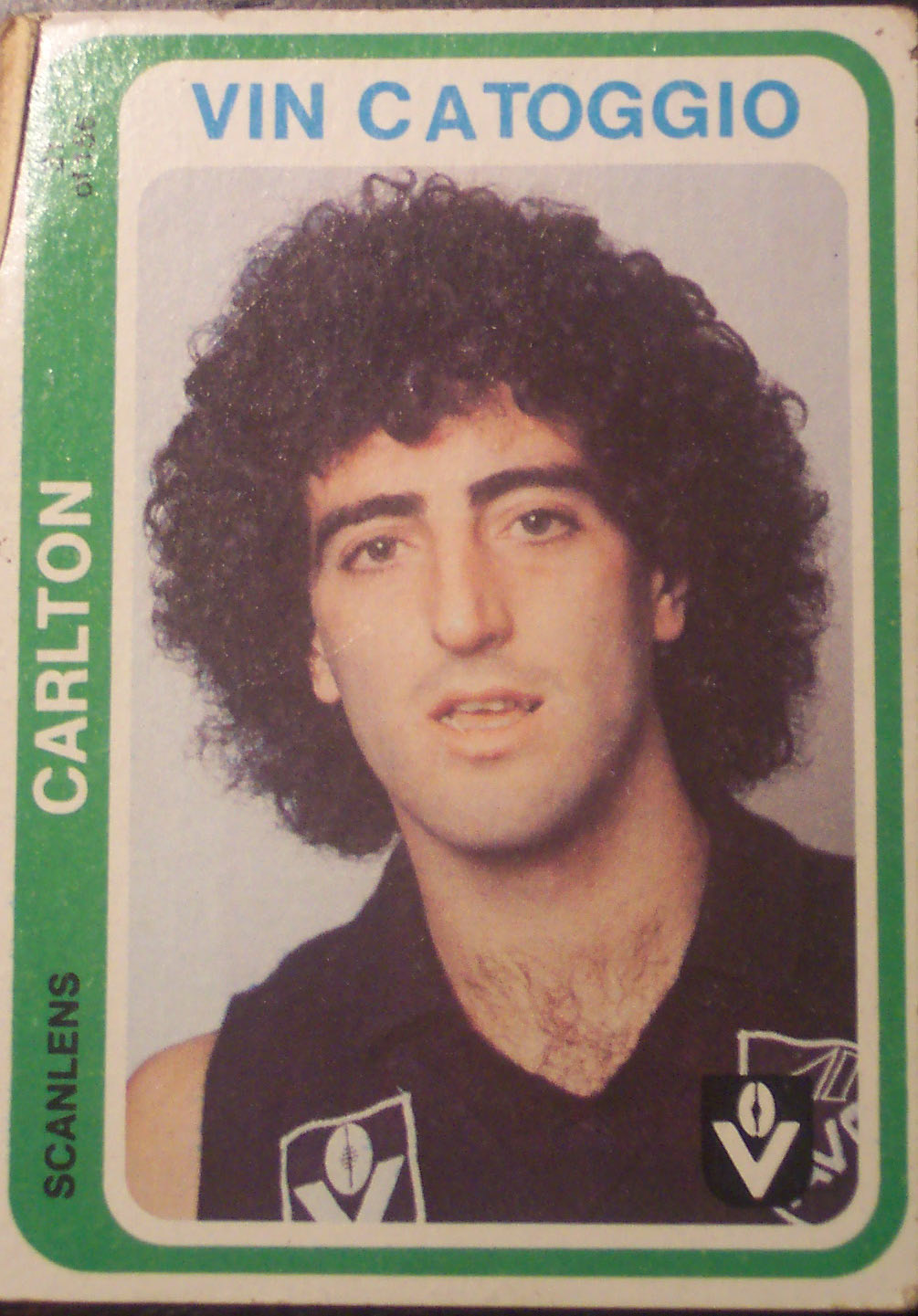 Vincenzo “the Cat” Catoggio was a pacy, skilful, lightly-framed rover from Princes Hill. Also later called “Spinner” for his elusiveness, he won the Morrish Medal as Best & Fairest in the VFL Under 19 competition while playing for Carlton in 1972, then followed up by winning the Gardiner Medal for the Reserves competition in 1973. During that same year, he made his debut off the reserves bench for the senior team in Carlton’s big win over Collingwood in round 7. After just one more appearance (again, as a reserve) in round 8, the 19 year-old played out the rest of the year in the lower grade - until he was a shock selection in the Blues’starting line-up against Richmond in the 1973 Grand Final.

Carlton was defending their title hard-won in a boilover the previous season against the Tigers, who were hell-bent on revenge. In typical fashion they targeted a number of key Carlton stars that day and set about knocking them out of the game. By half-time, Blues captain-coach John Nicholls, along with key defenders Geoff Southby and Kevin Hall were all concussed. Several others, including Catoggio, were still on their feet, but hurt. Richmond dominated the second half to win by 30 points, and Vinny did not see out the game.

Afterward, Catoggio was branded as one of the scapegoats for a defeat that burned deep. In a newspaper article published years later, one of his team-mates on that day, Brent Crosswell, wrote;
”when Vinny came into the rooms after that game, he was pale and upset. He made straight for the showers because his statistics read three kicks and five handballs. It was sad to see his solitary form sitting in the bath, his arms resting on his knees, his head down, his eyes full of tears. That Grand Final failure was the worst experience of Vinny’s life. It coloured the rest of his sporting career. In fact, he didn’t play a senior game in 1974. He was, in his own words, 'never in contention.' Throughout his football career he sought absolution and an opportunity to atone for his failure, but he didn’t get another chance because ’73 was his last Grand Final.”

Driven by his demons, Vinny worked hard to atone, stringing together some handy games in 1975. By then a more mature 21, he was still just 178 cm tall and 77 kg wringing wet. Yet what he lacked in bulk, he made up for with skill. Quick on his feet, always well balanced and frustratingly elusive, he became a cult figure at Princes Park, especially with our female fans. They loved Vinny’s impish smile, his dancing feet, and his trendy afro hairstyle.

By 1976 however, change was in the air. In its wisdom, Carlton’s match committee ‘leased’ Catoggio to WA club Subiaco for two seasons, and urged him to treat the move as an opportunity to work on deficiencies in his game – specifically his goal-kicking. It was a huge wrench for a young man from a close-knit Italian family. Yet to his credit, Vinny embraced the struggling Maroons and gave them whole-hearted service. Former Hawthorn Premiership player Brian Douge was appointed coach of Subiaco in 1977 and Catoggio was one of the chief beneficiaries.

When he arrived back home to rejoin Carlton in 1978, Vinny was confident that the responsibility Douge had demanded from him at Subiaco had made him a better player, and his performances thereafter added weight to that claim. The Navy Blues were on the verge of a golden era; a time that would bring three Grand Final victories in four years, thanks in no small way to the emergence of our legendary mosquito fleet of Rod Ashman, Trevor Keogh, Alex Marcou and Jim Buckley. While Vinny’s opportunities were limited from that time on and he became a regular bench-warmer, he still managed 52 games in three seasons, and produced an impressive return of 94 goals – including two hauls of six, and three bags of five.

In his last season of 1980, Catoggio sat on the pine ten times in his 20 matches, including another bitter defeat by Richmond in the Qualifying Final. Although he gave his all and contributed two of Carlton’s ten goals in that 42-point loss, he was omitted from the side the following week in favour of Jim Buckley, and never played senior football at Princes Park again. In 1981, Catoggio and fellow Blue Michael Young were cleared to Melbourne as part of the complicated Greg Wells transfer deal. After 71 games and 97 goals in navy blue guernsey number 4, Vinnie managed nine more games with the Demons in 1981 -82, and another eight when he transferred north to Sydney in 1983.

After his retirement from the VFL, Catoggio would play with VFA Clubs Prahran and Brunswick.

Catoggio would wore No. 49 when he played with the Carlton reserves team in 1972.