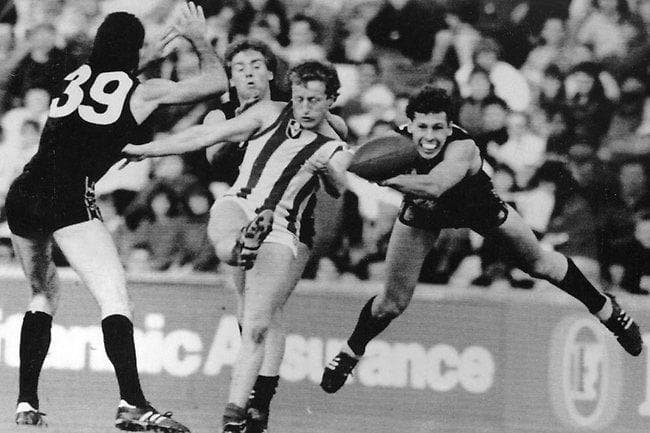 Carlton took on North Melbourne at the Oval, in London, England, in 1987.

The game is most famous for being relabelled the "Battle of Britain" after a young Alistair Clarkson broke Ian Aitken's jaw, and was then hunted by Blues players for the remainder of the match. David Rhys-Jones, Jim Buckley, Wayne Johnston, Brad Shine and young unknown Mark Edwards (making his only senior start ever) were all reported for the Blues. Shine received a reprimand for attempting to strike Clarkson right back, whilst Buckley and Johnston both received a 2-match suspension for more successful attempts at striking Clarkson. Edwards copped 2 matches for striking John Law. Rhys got 1 match for striking Donald McDonald. Clarkson was suspended for 4 weeks for the original strike on Aitken whilst Donald McDonald was reported for striking Rhys twice copping a reprimand and a one-match suspension.

As the match descended into chaos legendary North coach John Kennedy, according to highly unconfirmed reports, sent John Longmire (then an untried 16-year old) on to the field with the words "Just go out there and hit someone - otherwise everyone will think you're weak".

Clarkson told the Age in September 2004: "That was something that happened as an 18 year old, naive, immature footballer just coming into footy at the highest level," Clarkson said. "I've learnt a hell of a lot since then. It's certainly not something I want to indoctrinate into my players to play in that style or manner."