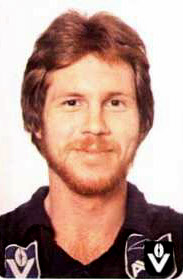 A typically fiery red-headed utility from Cooee in Tasmania, Greg Towns won plenty of respect throughout his 66-game career for the Blues during the mid-seventies. Although his opportunities were limited by the quality and depth of Carlton’s playing list at that time, he gave the Blues loyal service for six seasons.

Towns played his first senior match for the Blues in round 5, 1974 against Collingwood at Victoria Park on an auspicious occasion – game number 100 for Syd Jackson. The Blues were wobbling after three straight losses, but showed plenty of pluck that afternoon before going down by 18 points. Towns’ tenacity was soon evident, and rewarded when he kicked his first career goal.

For the rest of that year (and indeed, for the rest of his time at Carlton) Greg competed for a place in the Blues’ senior side against the likes of Alex Jesaulenko, Wayne Johnston, Jim Buckley, Ken Sheldon, Barry Armstrong and Wayne Harmes. He still averaged eleven games a season, and could always be relied on to give all he had. He wore guernsey number 9 in all of his matches, including four finals in 1975, ’76 and ’78, but by the latter half of 1979 was spending most of his time on the interchange bench. Eventually, after he wasn’t selected at all throughout Carlton’s ’79 Premiership campaign, Greg requested and was granted an open clearance. By coincidence, he had also played his last game for Carlton against Collingwood, in a 19-point defeat at Waverley in round 21 of that year.

In 1980, Towns agreed to join Footscray, wearing the No.17 guernsey he went on to play another 23 games for the Bulldogs over three years. In 1983 he transferred to VFA club Williamstown for two seasons where he played 22 games and booted 20 goals. Towns would later captain-coach Daylesford in the Ballarat League.

Greg Towns briefly wore No.54 when he first started out at Carlton in 1974.

During his junior days with Cooee, Towns won the North West Football Union Under-19 Best and Fairest in 1972. Cooee became the Burnie Hawks from 1987 to 1993, and then merged with hometown rivals the Burnie Tigers to form the Burnie Dockers in 1994.

Despite his difficulties in securing a regular game with Carlton at that time, Towns represented Tasmania in the 1979 State of Origin Carnival in Perth.