Two flags and the Hall of Fame... 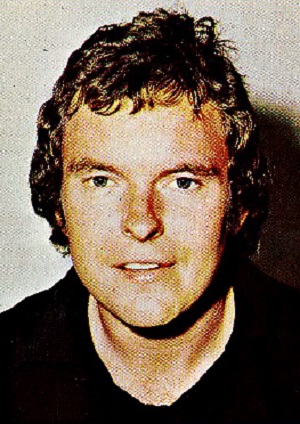 A wonderfully versatile player who averaged 22 possessions per game in his 204 matches in guernsey number 12 for the Navy Blues, Barry Armstrong was a lynchpin of Carlton’s 1972 and 1979 Premiership teams, and a stalwart of the club for 12 seasons.

Recruited from north-eastern suburban club Bundoora, Armstrong won the Blues’ Reserves Best and Fairest award and played his first senior game as an 18 year-old for Carlton in 1969. While his ability was obvious very early, he couldn’t command a regular place in Carlton’s star-studded senior side until 1971, when he emerged as a classic utility – a ball magnet who was strong overhead and a good user of the ball on both sides of his body. Weighing in at a solid 83 kg for his 182 cm height, Barry’s niche was in the centre, although he was equally at home roving or on a flank. His consistent good form all year was a significant factor in Carlton’s gruelling run through the 1972 final series, and ultimately, the Blues’ glorious upset Grand Final victory over hot favourites Richmond. Armstrong was everywhere that afternoon in his first experience of a VFL decider, racking up 26 disposals to be ranked high among the game’s best players.

Barry had another good year in 1973, demonstrating his goal-kicking prowess with two hauls of four majors in his handy total of 25 for the season. In September, he was eagerly anticipating another Grand Final showdown between Carlton and Richmond, when he was struck down by appendicitis and withdrew two days before the match. His presence on the field may not have changed the result – Richmond were ferocious in crashing and bashing their way to the flag - but a five goal hiding might well have been reduced with Armstrong in the side.

Carlton continued as a regular finalist over the next five seasons without progressing past the Preliminary Final, while Armstrong’s standing as one of the elite midfielders in the game was enhanced by some impressive achievements. He twice finished runner-up as Carlton’s Best and Fairest, and made the top five on five occasions between 1973 and 1978. He brought up his 100th game in the 1975 Qualifying Final, collecting 22 possessions in a disappointing loss to North Melbourne, and played match number 150 in a loss to St Kilda at Moorabbin in round 22, 1978. In between those milestones, in round 18, 1976, Carlton gleefully demolished Richmond by 83 points at the MCG, with Carlton’s number 12 dominant with 44 disposals, 8 marks and two goals. Then in 1978 Barry was acclaimed as Carlton’s Best Clubman, on the verge of another memorable season.

Season 1979 saw Carlton qualify for their first Grand Final in six years, gunning for a twelfth VFL flag against Collingwood. Heavy rain in the days leading up to the match was a boost to the Magpies, and as expected the game turned into test of tenacity as much as skill. Blues’ captain-coach Alex Jesaulenko rang the changes early, taking over the centre himself and sending Armstrong onto the ball as ruck-rover. Both moves worked a treat and Armstrong’s 22 disposals was another typically consistent effort, although it took an act of genius from the mercurial Wayne Harmes in the last few minutes of the match to eventually clinch Carlton’s five-point victory in an enthralling contest. 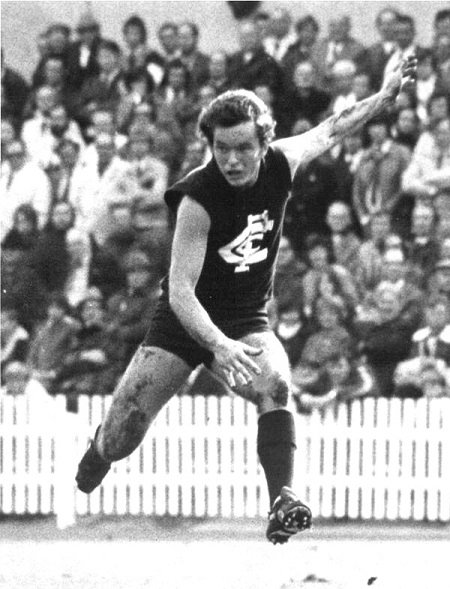 It would not have surprised if Armstrong had retired after that second Premiership triumph, because he was 29 by then, and had been playing at the top level for ten years. Persistent hamstring strains had begun to cost him games, but he was determined to get the best out of himself and had another prolific season in 1980 – collecting 30-plus possessions on four occasions. The Blues could have – indeed should have - won another Premiership that year, only to lose successive finals to North Melbourne and Collingwood and bow out empty-handed. In what turned out to be last final for Carlton, Armstrong went down swinging as one of the Blues best in a horrifying Semi Final loss to Collingwood. Starting on a half-forward flank alongside Mark Maclure and Wayne Johnston, Barry had 32 disposals, took 5 marks and kicked two goals as Collingwood won by 50 points.

Armstrong joined an elite group in May, 1981 when he ran out onto Princes Park for his 200th game against South Melbourne. On an auspicious occasion for the Blues, David McKay played game number 250, and meteoric star recruit Peter Bosustow kicked 8 goals as Carlton demolished the Swans by 99 points. On the following Saturday, Barry strained a hamstring during Carlton’s loss to Essendon at Windy Hill and was sidelined for six weeks. From then on he struggled to regain full fitness, and had played only three more matches before suffering the same injury in what turned out to be his last game – a 22-point win over North Melbourne in the second-last round of the home and away season. After being unable to earn a recall during the finals, yet rejoicing in the Blues 1981 Grand Final triumph over Collingwood, Armstrong announced his retirement. At that time, fewer than 20 other individuals had played more games for Carlton and few had been more admired and respected.

In 1996 Armstrong was elected to the Carlton Hall of Fame, joining a number of his former team-mates from Carlton’s golden era. Four years later he joined the club’s Board of Directors, serving from 2000 to 2003.