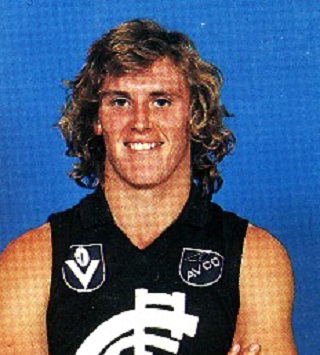 Throughout our game’s rich history, many talented footballers have had lengthy careers without achieving the ultimate goal of a Premiership, while others have found themselves in the right situation at the perfect time, and earned a place in a flag-winning side after only a handful of matches. This is exactly what happened to Tasmanian import Michael “Mickey” Young, who squeezed into Carlton’s powerful 1979 team late in his third year, and played in the Blues’ famous Grand Final victory over Collingwood in only his 22nd senior match.

Pursued by a number of clubs as a 17-year-old before the 1977 season, Young was recruited by Carlton from Hobart-based Clarence in 1977, and allocated the number 19 guernsey previously carried by 1972 Premiership star John O'Connell. He spent most of his debut year in the Reserves, before getting his senior call-up and warming the bench for the Blues’ round 15 match against St Kilda at Moorabbin. Carlton won that game in a grandstand finish, and from then on Mick was a regular member of the team for the rest of the year. In round 20, Young and bustling rover Jim Buckley starred in a big win over Essendon at Princes Park. Buckley kicked six goals, while Young’s pace and aerial skills across centre wing provided a reliable avenue forward for his team all day. By the end of that year, Young had played seven matches, and had kicked his first career goal in Carlton’s narrow loss to Richmond at the MCG in round 21.

However, after such a promising start, Young’s second season in 1978 was something of a train wreck. Early injuries, a loss of form and the recruitment of former Footscray winger Denis Collins (who took over Young’s wing position in round 3 and didn’t relinquish it) restricted Mick to only four senior appearances for the year. For a while, Young’s long-term future at Princes Park seemed tenuous, but he survived the end of year cull, and benefitted from an intense pre-season preparation heading into 1979.

Mick returned to senior football in round 2, 1979 and played three matches in succession, only to be omitted again until round 17, when a string of eye-catching Reserves games put him first in line to replace the injured Alan Mangels. Between then and the finals, Young consolidated his position, while Carlton picked up the minor premiership and set themselves for a Semi Final clash with North Melbourne at VFL Park, Waverley. On that fine, cool afternoon, the Navy Blues dominated the contest after quarter time, and ran out winners by 38 points in a score line that flattered the Kangaroos. Young took full advantage of the wide-open spaces on his wing, and topped off another good game by drifting forward to kick a memorable goal in his finals debut.

A fortnight later, Young, Alex Jesaulenko and Peter Francis made up Carlton’s centre line when the Blues met Collingwood in the Grand Final at the MCG. Central Melbourne had endured 48 hours of constant rain leading up to the game, but that didn’t deter a huge throng of more than 113,000 fans from packing into the stands. They were treated to a ferocious contest – a match that was decided more by courage than by skill, and is remembered for one of the most controversial finishes in Grand Final history. The telling moment came very late, when Carlton’s hero Wayne Harmes desperately chased the ball right to the boundary line in the right forward pocket, and with a big round-arm swipe at the ball, knocked it across the goal face to Ken Sheldon, unattended in the square. As Collingwood players and fans howled that the ball had crossed the boundary before Harmes’ fist made contact, Sheldon popped through a crucial goal. Carlton hung on to win by just five points, and Michael Young became the fourth Blue in Carlton’s history – after Rod McGregor, Ian Collins and John O'Connell – to wear number 19 in a Premiership side.

Hindsight indicates all too clearly that Carlton squandered the opportunity of back to back Premierships in 1980, due largely to another boardroom upheaval. Club President George Harris, and Premiership captain-coach Alex Jesaulenko had both resigned by Christmas 1979, replaced by Ian Rice as President, and the recently retired Peter ‘Percy’ Jones as senior coach. Jones was a hugely popular figure at Princes Park, but appointing him as coach immediately after he had retired as a player proved an unwise decision. The sheer class of Carlton’s list got the team to second spot on the ladder after 22 gruelling home and away rounds, before the Blues were blasted out of flag contention by successive heavy losses to Richmond and Collingwood. Young had had another reasonably good season of 15 games (including both finals) but after a blowtorch was applied to Jones and a number of senior players, Mick was told that his services were no longer required.

After departing from Princes Park, Young crossed to Melbourne in 1981, and wore their number 5 guernsey in 15 matches over three seasons, his final season in 1983 he spent the season in the reserves at Melbourne. The Demons delisted him at the end of 1983, so he trained briefly with Essendon in 1984 - but when he was unable to gain a place in the Bombers' senior team, he retired from VFL football.

'79 premiership player Young passes away
Members of Carlton’s 1979 premiership team will gather for next year’s 40th anniversary of the Grand Final triumph over Collingwood minus one, with the premature passing of wingman Michael Young. Young died in Melbourne after a long battle with cancer this morning, three months to the day short of his 60th birthday. Recruited to Carlton from the Hobart-based Clarence in 1977, Young inherited the No.19 of the 1972 premiership back-pocket John O’Connell, who in late 1989 himself succumbed to cancer at the age of 38. Young took out Carlton’s reserve grade best-and-fairest award in ’77. The following season, in thr 15th round of that year against St Kilda at inhospitable Moorabbin, he completed his senior debut. Though the late Denis Collins’ presence on a wing curtailed Young’s senior appearances through 1978, a series of solid showings at reserve grade level through mid-’79 warranted his recall . . . and timing as they say is everything. Young was part of Carlton’s emphatic semi-final victory over North Melbourne at VFL Park. He was just 20 years old and 22 senior appearances into his senior career when he played his part in the feted outfit, captained and coached by Alex Jesaulenko, which prevailed by five points on a wet deck on Grand Final day. The following season, Young turned out in 15 senior matches including both finals, but after 37 senior games in total was moved on at the completion of a particularly trying season for the Club. Relocating to Melbourne, Young represented the Redlegs in 15 more matches through two seasons until his delisting in 1982, and despite briefly training with Essendon subsequently gave the game away.

A fellow member of the ’79 team which delivered Carlton’s 12th League premiership was the three-time premiership player Ken Sheldon, who said of Young: “Michael was a very talented, charismatic and loyal teammate who ran his opponents around in circles . . . and often some of his teammates too”. Another team member, the four-time premiership player David McKay, said: “Michael was a champion fellow and a very good player for Carlton in a premiership season”. “I know Michael had been ill and undergoing treatment in The Alfred for quite a while. The old Carlton runner Brendan O’Sullivan was a regular visitor to him and ‘Curly’ Austin, Barry Armstrong and Alex Marcou had also been in to see him,” McKay said. “I spoke to him a couple of weeks ago and thought he was on the mend. He was going into rehab and was even considering fronting up to our most recent Spirit of Carlton function, but it wasn’t to be.” Nineteen members of Carlton’s premiership 20 of 1979, including the inaugural Norm Smith Medallist Wayne Harmes, are still living. Most of them will gather at Prahran’s College Lawn Hotel this week to raise a glass to their old teammate. Tony De Bolfo.