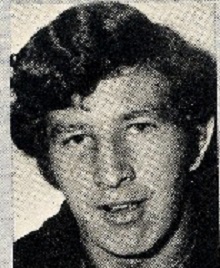 After starting his career at Carlton as a centreman or ruck-rover at Under-19 and Reserves level, John Michael “Jack” O’Connell found his niche in defence for the Blues and was a creative back pocket in Carlton’s record-breaking 1972 Grand Final victory over Richmond. A dasher who loved to take off on bouncing runs, Jack spent much of his career alongside champion full-back Geoff Southby, with either Vin Waite or David McKay in the opposite pocket. Together, they created a full-back line regarded as among the best in club history.

O’Connell’s journey to Premiership glory began during his school days at St Mark’s in Melbourne’s outer north, then at Glenroy YCW and Fawkner. In 1967, aged 17, he joined Carlton’s Under-19s, and by midway through 1969 he was playing Reserves football in guernsey number 50. Early in the following year, a couple of strong showings saw him banging on the door of senior selection, and he was duly rewarded by being named on the bench for his senior debut against Richmond at the MCG in round 3, 1970. For the Blues and their supporters, the game was a forgettable one, because Carlton surrendered a big half-time lead to be beaten by 13 points, and O’Connell wasn’t called on until the dying minutes.

Sent back to the Reserves after that one brief taste if the big time, Jack honed his skills and bided his time - for more than a year – while Carlton went on to win the 1970 Premiership. Eventually, he earned a recall midway through 1971, but with a bevy of stars standing in his way, he was a regular reserve until late in the year, when coach John Nicholls – aware that incumbent Ian Collins intended to retire – offered O’Connell a chance in the back pocket. Jack grasped his opportunity with both hands. At 183 cm and 82 kg he was bigger than the average specialist back-pocket of that era, but he gave nothing away in agility. An excellent mark and an accurate kick off either foot, he had settled in beside Southby by the end of that season, playing the last ten games straight.

As season 1972 dawned and Collins retired, O'Connell inherited the Blues’ number 19 guernsey and began marking his mark in the Carlton defence. Inspired by Southby’s creativity and Waite’s aggression, Jack was soon a headache for every opposition club. An ankle injury sustained in round 5, 1972 against Collingwood cost him five matches, but he was back to top form by finals time, when Carlton finished the regular season on top of the ladder. In their first final together – the Second Semi Final - O’Connell, Southby and Waite were resolute in a thrilling draw. Richmond won the replay, then Carlton conquered St Kilda in the Preliminary Final to earn another crack at the Tigers in the Grand Final.

Opting for a strategy of all-out attack in the flag decider, the Blues blasted off the blocks to kick 8 goals in the first quarter, 10 in the second and 7 in the third to put the game right out of Richmond’s grasp with a full quarter remaining. After coasting to the final siren, the Blues collected their eleventh VFL Premiership by 27 points. Waite was missing from the match, having been injured in the Preliminary Final, but David McKay was a more than adequate replacement, and all three defenders on the last line completed an excellent final series.

On the way to another consistent season in 1973, O’Connell strained a thigh in Carlton’s surprise loss to Fitzroy at the Junction Oval in round 16, and wasn’t recalled to the senior side until the Grand Final, when Carlton and Richmond met once more in the 48th match of Jack’s career. A few days beforehand, Barry Armstrong had been ruled out when he was hit by appendicitis, so O’Connell took over Armstrong’s assigned role of negating the Tigers’ star centreman Ian Stewart. Jack stuck to his task all match, but neither he nor his team could hold back a ferocious Richmond side that crashed and bashed its way to victory.

O’Connell went on to play in two more finals campaigns in 1975 and ’76 but was denied the joy of another September victory. He brought up game number 100 at Princes Park in June 1976, when Carlton ended a five-game losing sequence to beat Essendon, before calling time on his VFL career after the Blues suffered a heart-breaking 1-point loss to North Melbourne in that season’s Preliminary Final.

In 1977 O'Connell was cleared to WAFL club Subiaco. Later he came back to Victoria and coached Diamond Creek to a Premiership in the Diamond Valley League. Then in 1987, the football world was rocked by the news that Jack had been diagnosed with a virulent form of cancer. He fought hard for 18 months, but tragically passed away on the 5th November, 1989 aged just 38.


Off the field, O’Connell was a quiet, reserved character who, by 1973 had struck a warm friendship with another man of few words in his champion team-mate Bruce Doull. The pair could often be seen together sharing a beer after Sunday morning recovery sessions, and club folklore has it that the only regular conversation to be heard between them was, “it’s your shout.”