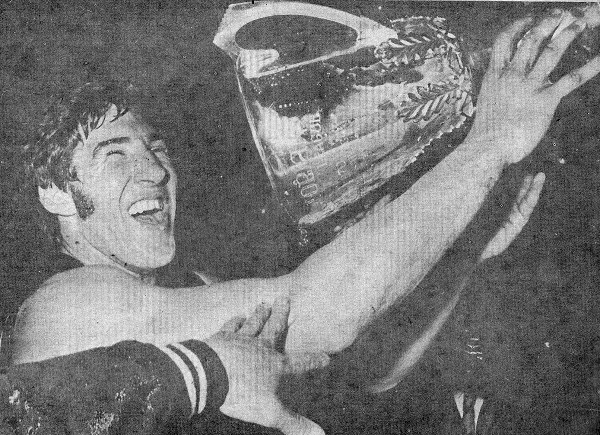 Vincent “Vinny” Waite was a tough, reliable and popular defender for the Blues in a fine career between 1966 and 1975. Four of his 153 games were Grand Finals – and two of those were legendary Carlton victories. He played his first game as a raw-boned 17 year-old in 1966, and tragically, died of a heart attack in 2003. Although he was taken from us far too soon, Vin’s legacy lived on at Princes Park in the person of his son Jarrad, who wore the same navy blue guernsey number 30 as his dad in 184 games between 2003 and 2014.

Vin was recruited from Latrobe Valley club Morwell, at the insistence of former Carlton captain Graham Donaldson, who played a big role in recruiting for the Blues in the Gippsland region at that time. Donaldson liked what he saw in the tall, well-built youngster with a raking left foot, and thought he might develop into a handy ruckman.

Blues captain-coach Ron Barassi agreed, but decided not to waste time. He thrust Vin into the big time almost straight away, and the 17 year-old was selected for his first senior game against Melbourne in round 5, 1966. Playing out of a forward pocket, Waite took some good marks, and booted goals with his first two kicks as the young Blues destroyed the Demons by 47 points.

Although his debut season was cut short by a damaged spleen, and he averaged only six matches in each of his first three seasons, Vin hit his straps in 1969 to claim a regular place in a strong Carlton defensive unit, usually in a back pocket. Not particularly quick, but a safe mark and a penetrating kick, he ran hard and straight at the ball, regardless of who was in the way. And when he got it, he generally used it well.

Waite played in his first Grand Final in 1969, when he, Wes Lofts and Barry Gill formed a formidable last line for the Blues. But even that trio of tough nuts couldn’t prevent Richmond from running out winners by 25 points. Just one year later however, the Blues were back at the MCG with another opportunity when they took on the hot flag favourites Collingwood in the 1970 Grand Final. Kevin Hall replaced Lofts at full-back, with Gill and Waite in the pockets.

Deep in trouble at half-time that day, Carlton coach Barassi famously rallied his troops with the order to “handball, handball, handball,” and his team stormed back from an impossible 44 points down at half-time to claim the most famous Premiership victory of them all. The Magpies were shattered for a decade, while Vin and every one of his team-mates were instant heroes.

Waite continued playing good football in season 1971, and though Carlton failed to make the finals, his career stepped up another notch when he was selected in the Victorian state team that comfortably beat South Australia in front of a big crowd at the MCG. 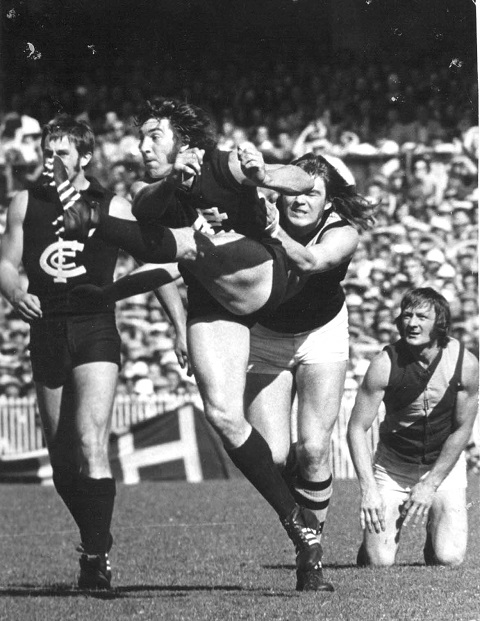 In many respects, Carlton’s 1972 Flag win over Richmond ranks with the 1970 triumph. Again it was a victory against the odds, achieved by sheer guts against a more highly favoured opponent. Carlton went into that match as a rank underdog, bruised after three successive cut-throat semi-finals. By contrast, Richmond were at full strength, and coming off a week’s rest.

As part of a strategy of all-out attack devised by Carlton’s captain-coach John Nicholls and the match committee, Waite went to a half-back flank, Nicholls himself went to the goal-square and Peter “Percy” Jones was asked to carry the rucks. The ploy worked brilliantly, and Carlton won emphatically with a mammoth score of 177 points in the highest-scoring flag decider ever played. Even now, that record still stands. As usual against Richmond, there were plenty of rugged physical clashes, and Vin finished the match on the bench, nursing a broken jaw courtesy of the Tigers’ enforcer; ex Blue Ricky McLean.

Vinny’s fourth Grand Final in five years came in 1973. For a third time the opponent was Richmond, and the Tigers were hell-bent on revenge. This time it would be an old-style decider; a crash and bash survival of the fittest. Richmond ruckman Neil Balme led the Tiger assault, and by half time Carlton’s Nicholls, Geoff Southby and Hall were all concussed. Waite finished the game with a broken nose, and Carlton suffered a five-goal defeat.

That bitter day was somewhat mirrored in the remainder of Vin’s career. Early in 1974, persistant calf and lower back strains began to plague him. He soldiered on, as cheerfully and committed as always, but never quite regained consistent good form. He retired from league football after the ’75 season, and headed south to captain-coach Tasmanian club Latrobe for the 1976 season, he signed a four year contract with Latrobe. Waite had to sit out the first four games of the season due to a suspension in his last game in the Navy Blue. Mid year in his fourth and final year of his contract, he controversially crossed to East Devonport for four seasons, before returning to the LaTrobe Valley to finish off as playing coach of Churchill at the age of 36.

Afterward, Vin was a regular at Carlton’s Premiership team reunions, as popular as always because he never lost the affable good nature that Blues fans loved in his heyday. He thrived on reminding his team-mates (especially the forwards) of how he goaled with his first two kicks on debut against Melbourne, and it was said that he could describe the circumstances of every one of his 33 career goals.

In 2001, when Vin’s son Jarrad was signed by Carlton as a third round, father-son selection in the National Draft, Vin was understandably the proudest dad in the country. Even more so, when Jarrad played his first game for the Blues in 2003, wearing his dad’s old number.

But only a few months later, in July 2003, the Carlton Football Club and indeed, the entire football community was stunned by the news that Vin Waite had suffered a sudden heart attack and died at the age of just 54. Tributes poured into Princes Park for many days after the news broke; testament to the respect and genuine affection felt for a good bloke who played his footy hard, yet was always keen for a beer and a laugh afterward.

On the following weekend, as a tribute to his father, Jarrad insisted on taking his place in the Carlton side to play Melbourne in the round 14 match at Princes Park. Those at the game will always remember the third quarter, when Jarrad streamed down the ground and kicked a classic running goal. The huge roar from the crowd that followed – and which almost lifted the roof off the Social Club - was as much for Vin as it was for Jarrad.