A massive crowd of 43,000 at Victoria Park with queues out to Johnston Street. Just managed to squeeze in before the lockout, and made my way around to the outer forward pocket. (Trenerry Crescent end) Unable to get up the embankment due to the crowd, I had to make do, propped at the bar listening to the game on the radio and watching the ball sailing overhead through the goals.
Not such a bad way to spend a pleasant Saturday afternoon.
Two days later on Monday, hundreds of millions of people world wide watched Armstrong and Aldrin walk on the moon. 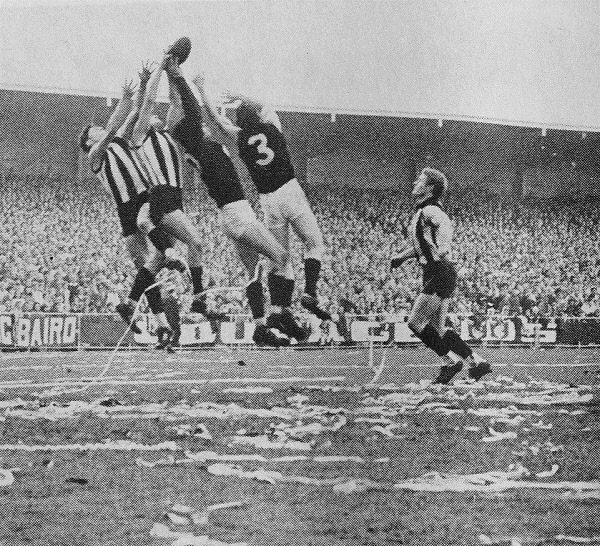 Carlton's Vin Waite marks, Kevin Hall (3), at the Trenerry Crescent end, while Collingwood captain Des Tuddenham scouts in front.
Note: Carlton banners on the fence with the streamers and torn paper courtesy of the Carlton cheer squad littering this outer end of Victoria Park.
Doug Baird despite only playing 6 senior games also played with the U19's and Reserves for 3 years and had a loyal following.
His banner would appear at most Carlton matches during his time with the club.