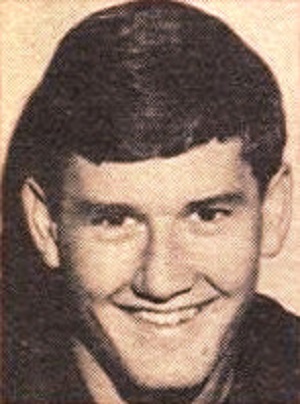 Kevin "Racehorse" Hall was a solid, reliable, often inspirational member of three Premiership teams for the Blues, and later, a valuable and long-serving committee and board member.

He was a somewhat reluctant recruit when he arrived at Princes Park in the summer of 1962, because until then he had wanted to play for Footscray. Although he was a Carlton local (from West Preston YCW) the Bulldogs chased hard after the strapping 19 year-old, 191 cm, 83 kg centre half-forward and the Blues were lucky to hold him. Hall's cousin was Bernie Lee who played 95 games for the Bulldogs from 1957 to 1963.

His form in the 1963 pre-season practice matches was impressive, so Carlton assigned him guernsey number 3 and he made his senior debut that year as a forward. Later he was tried in defence, and found his niche on a half-back flank. Tall, very quick for his size and a strong mark, he proved to be a wonderful big occasion player. By 1968 the stands and the fences at Princes Park were echoing to the roar of "Go, Racehorse!" as Kevin went for one of his regular downfield dashes. In September of that year, Hall was a one of the unsung heroes in the Blues' fighting three point Grand Final victory over Essendon - a low-scoring, dour struggle in which the Bomber half-forward line had little influence.

Two years later, he was involved in a sensation on the eve of the 1970 Grand Final when coach Ron Barassi dropped established full-back Wes Lofts from the team and sent Kevin to shadow Collingwood spearhead Peter McKenna. By half-time the move appeared to have backfired; Collingwood led by 44 points, and McKenna had booted five goals. But like each and every one of his team-mates, Hall lifted in the second half as Carlton shattered Collingwood to win by 10 points on perhaps the greatest day in the club's history.

Kevin won his third Premiership medal when another gallant Carlton team demolished hot favourites Richmond in the 1972 Grand Final. Playing their fourth cut-throat match in as many weeks, the bruised and battered Blues met Richmond on a fine, clear day at the MCG. Richmond were at full strength and refreshed after a weeks rest, but it was Carlton who triumphed again; kicking 28 goals to Richmond's 22 to snatch another glorious flag victory. Among the changes that unsettled the Tigers early was the switch of captain-coach John Nicholls to full-forward, and Hall from defence onto the ball as a ruck-rover.

Kevin played his 169th and last game for Carlton in the 1973 Grand Final. Still smarting from their defeat in '72, Richmond were hell-bent on revenge and got it. Hall, full-back Geoff Southby and Nicholls were all knocked senseless in the first half, and the Blues never recovered. Hall managed two goals to take his career tally to 51, then announced his retirement after the game. His departure from the team was done with dignity and with a minimum of fanfare, which pretty much sums up the way Kevin played his football.

In 1978 Hall was appointed to Carlton's match committee, and over the next twenty-five years or so served the club in a variety of positions, including a period on the Board of Directors. In 1999 his contribution was recognised in the most appropriate of ways, when he was elected to the Carlton Hall of Fame.