1970 was the year that the home and away season was expanded to 22 games, from 20 the year before. For the first time since the competition had expanded in 1925, clubs would play every other club twice during the season. After reaching the Grand Final in both of the previous years, and winning a flag in 1968, a lot was expected of Carlton in 1970. And the club delivered, winning in our third successive Grand Final, to register our 10th Premiership by defeating Collingwood by 10 points at the MCG. Against this level of success was the fact that the Blues of 1970 were a young team, with three of our youngest ever teams representing the Blues in 1970. 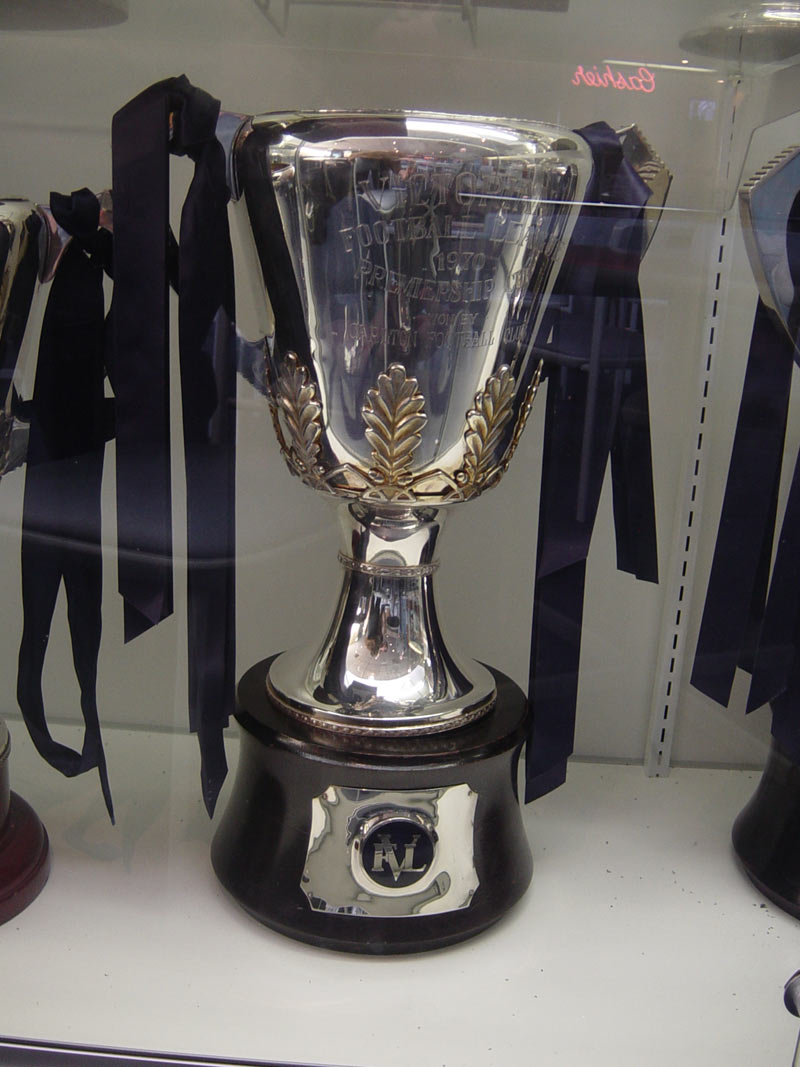 Solid form in the first two games of the season saw the Blues with 2 wins going into a round 3 match against Richmond, the side that had beaten us in the Grand Final in 1969. Carlton dominated the first half, leading at half time by an even 5 goals. The Tigers improved in the second half, narrowing the gap to 12 points at three quarter time. An inspired 8 goal last term from Richmond sunk the Blues, and the Tigers registered a 13 point win. The club would bounce back to win its next three games, giving Carlton a 5-1 start to the season and second place on the ladder behind Collingwood.

A 77 point thrashing by South Melbourne in round 7 seemed to rob the team of confidence, at as a result the Blues lost 4 in a row from round 7. This saw the club slump to sixth place on the ladder, one game out of the eight and 4 games behind top spot.

A round 11 thumping of Melbourne seemed to restore the teams confidence, and eight straight wins had the Blues back firing and back into second spot on the ladder, only one game behind Collingwood in top spot and 2 games ahead of third placed St Kilda. In fact, from round 11 on, the club would only lose one more game for the home and away season, a heavy defeat to ladder leaders Collingwood in round 19. A 16 win, 6 loss record saw the club sitting on second place on the ladder at the end of the regular season, 2 games behind Collingwood and 2 games ahead of St Kilda.

The most successful teams of 1970, Collingwood and Carlton would meet in the second Semi Final, with a place in the Grand Final at stake. In a game that would be close all day, Carlton's more accurate kicking would keep them in the match, but the Pies would run out 10 point winners. The Blues would play the following week, against St Kilda in the Preliminary Final to attempt to gain a chance at revenge on the Pies in the Grand Final. Inaccurate kicking by both sides kept the game close in the first half, with Carlton enjoying a 12 point lead at the break. The Blues steamrolled the Saints after the main break, kicking 11 goals to 3 in the second half to more than double St Kilda's score.

In the Grand Final Carlton would be hammered by Collingwood in the first half. The Magpies kicked four goals to none in the first quarter and six goals to four in the second quarter, to lead by a massive 44 points at half time. Collingwood appeared to have the game and the flag sewn up, but the game was not lost. Ron Barassi famously instructed the Blues players to "handball, handball, handball" and play on at all costs in the second half. By the 14 minute mark of the third quarter, Carlton had kicked seven goals straight to trail Collingwood by only 3 points. In one of the most famous Grand Final comebacks of all time, the navy Blues would go on to win, 17.9 (111) to 14.17 (101).

The Blues's goal-kicking record in a season record was smashed by "Jezza", who would kick 115 goals. He was the first Blue to achieve this milestone, and the only one in our history to become a 'Centurion'. Jezza was our leading goal-kicker for 3 years in succession, with 1970 being the second year in the pattern.