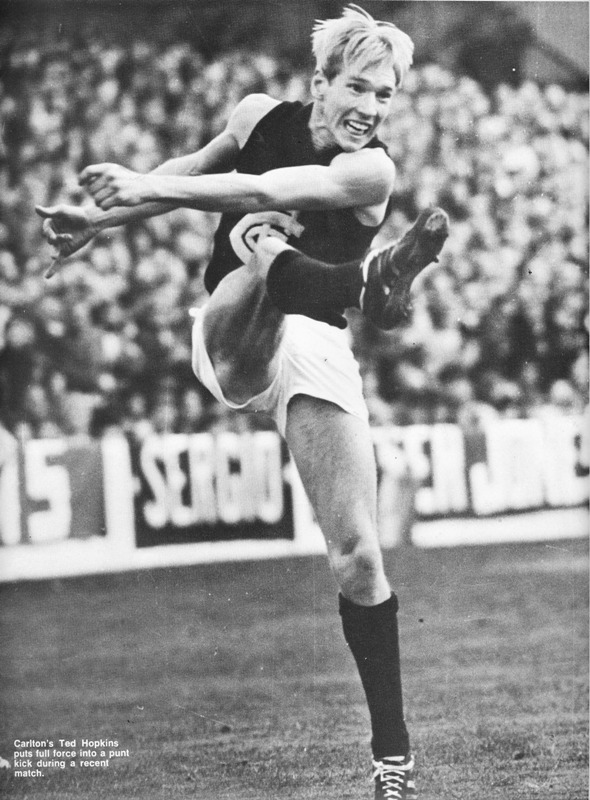 These five words, barked by Blues' coach Ron Barassi to 19th man Ted Hopkins at half-time in the 1970 VFL Grand Final, were the catalyst for one of Carlton's greatest victories. On that dramatic afternoon at the MCG, in front of an all-time record crowd of 121,696, Collingwood went into an epic final as hot favourites. The Magpies had already comfortably beaten the Blues twice during the home and away rounds, and again a fortnight previously in the second Semi Final. In the Grand Final, they dominated the first half to lead by 44 points, and in the Magpie rooms at the long break, the back-slapping had begun. The black and white masses knew that at last, they had another Premiership in the bag.

Meanwhile, in the Carlton rooms, Barassi was praying for a miracle. With nothing to lose, he decided to gamble on a tactic he had been nurturing for years. He ordered his team to abandon the defensive side of their game, and to attack at every opportunity - from everywhere on the ground - using handball and hard-running to unsettle Collingwood’s pattern of play. He moved star ruckman John Nicholls to full-forward, Alex Jesaulenko to centre half-forward, and brought 19 year-old blonde rover Ted Hopkins onto the field in a forward pocket.

The plan worked beautifully. In the first ten minutes of the third quarter, Carlton slammed on four goals - including two to Hopkins, who snapped both from spillages off the pack in the Carlton goal-square. With David McKay impassable in defence and Robert Walls lifting across half-forward, the deficit at three quarter time was 17 points. Still, Collingwood was expected to rally after a much-needed breather at three-quarter time, but that just didn't happen. Carlton’s confidence grew by the minute, and with Teddy running riot up forward, the Blues stormed home to win by ten points. Hopkins finished with four goals, and was chaired off the ground by a jubilant mass of the Carlton faithful.

That fairytale performance, a dream familiar to everyone who has ever played the game, was the pinnacle of a short and previously unremarkable career by Hopkins. Something of a gifted all-round sportsman, he had won two Australian Junior Water-Skiing championships before coming under the notice of VFL scouts as clever, long-kicking Aussie Rules centreman for his home town club at Moe, in the Latrobe Valley. Former Blue Graham Donaldson played a big role in recruiting for Carlton in the Gippsland region at that time, and it was he who brought Hopkins to the Blues' attention, as well other good to great performers like Garry Crane, Bill Bennett, Vin Waite, Bryan Quirk and Bob Edmond. 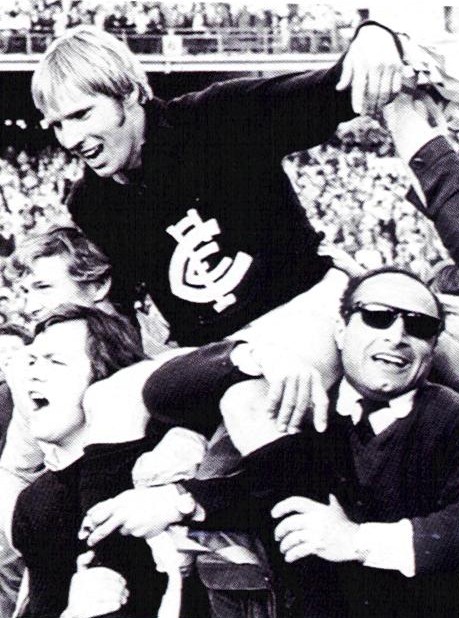 At Donaldson's urging, Hopkins was invited to join Carlton’s Under 19 squad, and quickly worked his way up through the Reserves team to make his senior debut for the Blues against Fitzroy at Princes Park in June, 1968. The ‘Baggers won by almost ten goals that day, and Teddy spent most of the game where he was destined to spend most of his career – on the reserve bench. He managed only eight games in his first two years at Princes Park, mainly because of the quality and depth of Carlton’s player list of that time. Carlton beat Essendon for the Premiership in 1968, and were runners-up to Richmond in 1969. By 1970, Ted had made 19 appearances for the Carlton seniors prior to the Grand Final, starting 11 of them on the bench. It should be noted that under VFL rules then in force, there was no interchange allowed. Once either the 19th or 20th men were on the field, the player they had replaced could not return.

So it was that Barassi anguished all through half-time during the Grand Final. His instinct was to replace the experienced West Australian rover Bert Thornley with Hopkins immediately, but some members of the match committee were opposed to the move, urging him to give Thornley ten minutes more. They reasoned that taking an uninjured man off early flirted with the danger of leaving Carlton short of fit players at the end of the match.

Barassi said later that it was simply instinct that settled the matter. He knew that Carlton had to strike back hard, immediately. If the Blues couldn’t substantially cut the deficit by three-quarter time, what happened from then on was irrelevant. ‘No,’ he said, ‘Hopkins has to go on now.’ And the rest is history. Glorious, unforgettable history.

In the weeks and months after those Grand Final heroics, Ted found the adulation difficult to cope with. Never very comfortable in the limelight, he sought escape from his fame by camping in the bush during the off-season, and running a water-ski hire business at Lake Eppalock during the summer months. He saddled up for pre-season training again in 1971, but by then had convinced himself that he had achieved all that he possibly could in his VFL career. Therefore, after just one match in the new season – again off the bench, against North Melbourne at Arden Street – he quietly retired from elite level football to take up a new career as Head Ranger at Falls Creek National Park. Some 12 months later however, the lure of the game brought Ted back to the field for Albury in the Ovens and Murray League. He spent two years with the Tigers, then headed home to the Latrobe Valley to finish his football career with the Yallourn Blues.

Throughout those years in regional Victoria, Ted embarked on a variety of business ventures in printing, publishing and broadcasting. Holding a degree in Economics and Politics, he authored a number of books of prose and poetry. Then in 1995, he founded Champion Data, one of the first companies to specialise in the compilation of AFL match statistics, and changed coaching forever. Now, as our national game rolls on into the first decades of the 21st century, the organisation that Ted founded continues to provide an essential platform for the preparation of most AFL teams.

Articles: Menu Page for all of Ted's contributions to the Blueseum