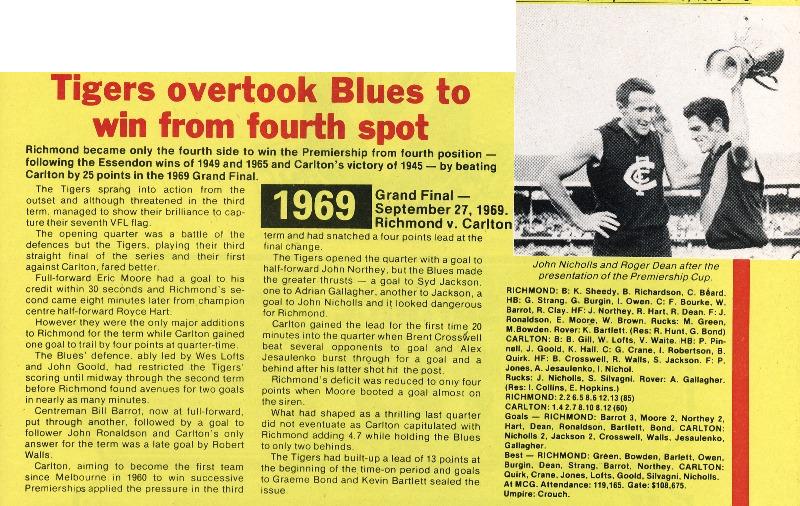 I remember going to the '69 final full of bubbly optimism. Walking into the M.C.G. with dad brought back memories of the year before when I had seen my beloved Blue baggers down the Bombers. At that point, in the glorious September sunshine of '69 I had a 100% winning record of watching the Blues play in Grand Finals. Sadly, it would be halved before the day was out.

I have many more memories of '68 than '69 - funny how winning does that to you. Even as a child before the post losing alcohol washed the pain and memories away, I was able to lose a lot of the memories from that forgettable Grand Final.

Some things I'll never forget though. The gloominess at half time as we trailed the Tigers but, as in the next year, the third quarter was ours. Perhaps it was in this very game the the idea of Carlton and the third quarter began. Certainly the boys ran out and and quickly set about clawing back into the game and then pushing into the lead. When the third quarter siren sounded I can remember still the applause from the Navy Blue faithful. We had shown the Tigers our class. Jackson, Jezza, Big Nick, the boys all looked as if they were in control. If I remember correctly we had taken charge of the center that quarter but it seemed that the effort to win that quarter had taken it's toll.

The legs were gone. Unlike 1970 when we would go on with it, this time the boys had little in the tank. Richmond, by contrast, seemed to have blokes everywhere in that last quarter and no more so than Billy Barrot. I have this picture of him stuck in my mind, he's running out of the middle and the Carlton collective sag, a tired, 'not again', whisper echoing around the cold Colosseum as he delivers another long drop kick into their forward line. Funny how things repeat themselves. Many years later I was at the '93 final the day Long took control and during that game I remember thinking about Billy Barrot and the '69 Final.

Our lead vanished and then they simply strolled away with the game. Two points we scored that quarter. Two points.

I remember about fifteen minutes to go, staring up at my dad and seeing that steel glare he always got when the Blue baggers were gone. I think I cried then. If the year before was nothing more than a glorious burst of song all the way home that day after the Tigers beat us was an epic journey through the harsh, cold landscape of sporting reality. In sport all heroes fail the test of our love, leaving us as children to deal with the pain and the silence of the adults that grip our hands and lead us into the darkness.

I remember Royce Hart and I remember Phil Pinnell ( who my brother raved about) but not much else. Garry Crane could not shove us over the line no matter how large his heart. Quirk ran and ran but in the last quarter always seemed to be chasing rather than running away from the black and yellow jumpers. It was a horrible day by the end, one I try to forget.