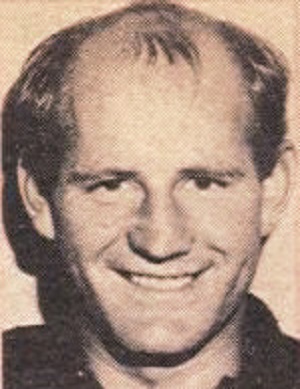 His possession rate was never particularly high, and there was nothing flashy or flamboyant about Barry Gill, but in 132 games for the Navy Blues from 1964 to 1972, he played in three consecutive Grand Finals, and won two of them. At first a forward, he soon became a lock-down defender, and his aerial strength and unshakeable concentration often created nightmares for his opponents.

Barry and his older brother John were always destined to play for Carlton. Their uncle Frank Gill had been a champion full-back for the Blues during the 1930s, and the family had maintained a strong connection before the brothers arrived at Princes Park from the family property at Casterton in western Victoria in 1963.

John Gill played his first senior game in the opening round of 1964, and the family was thrilled when Barry joined him for the next match against Hawthorn at Glenferrie Oval in round 2. John kicked his first career goal from half-forward against the Hawks, while Barry spent most of the game on the reserves bench as Hawthorn won comfortably. In round three against Melbourne at the MCG, Barry played as a ruck-rover and celebrated his first career goal, but from then on his future lay almost exclusively in defence.

When Melbourne legend Ron Barassi shocked the football world by accepting a lucrative offer to captain-coach Carlton in 1965, he and Barry struck up a rapport that lasted throughout Barassi’s tenure at Carlton. Sadly, John Gills’ career came to a premature end in 1967 when he suffered serious knee damage, but Barry carried on and played solidly across half-back when Carlton beat Essendon by just 3 points to claim the 1968 Premiership.

In 1969, Gill was in a back pocket alongside Wes Lofts when the Blues defended their title against Richmond in that year’s Grand Final. Although he was just 24 years old by then, premature baldness was making Barry unmistakeable on the field. It was unfortunate, but his hair loss helped to highlight his work rate, and made him a particular favourite among Blues supporters in the huge crowd who saw the Tigers beat the Blues by four goals.

Redemption from that defeat was not long in coming. Twelve months later, in September 1970, Barry was resolute again in the most celebrated match in Carlton’s history, when the Blues surged back from 44 points down at halftime in the Grand Final to snatch the Premiership flag from Collingwood’s grasp. Again in a back pocket (but this time next to Kevin Hall, who had sensationally replaced Lofts at full-back) Gill blanketed the resting Magpie rovers all day and conceded just one goal for the game. 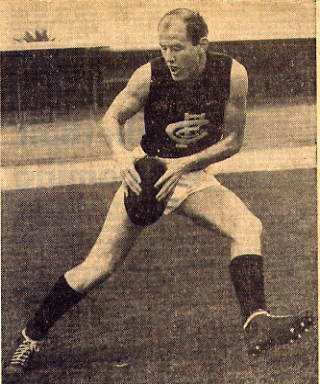 Like many of his team-mates, that extraordinary victory was the pinnacle of Barry’s career. He played on for another two seasons, and was appointed captain of Carlton Reserves in 1972, but when he was overlooked for a place in that season’s flag side he retired from VFL football at the end of the year. He had worn guernsey 21 in all of his 132 senior games, and kicked just five goals in his rare forays forward.

In 1973, Barry was appointed captain-coach of VFA club Williamstown, and led the Seagulls to mid-table finishes in his two years in charge. Later, he coached the Coragulac Under-18s in Victoria's Western Districts.

In his first year at Princes Park in 1962, Gill played Reserves football in guernsey number13. In 1963, he switched to the number 21 formerly worn by winger Billy Arch.

By coincidence, Barry played his first and last senior games for Carlton against Hawthorn, and his final appearance in navy blue came in the 1974 Reserves Preliminary Final, when the Hawks beat Carlton by 33 points.