"Gags" - Rover of the Century. 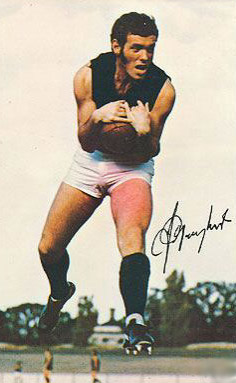 Carlton’s history is lavishly embroidered with the deeds of its little blokes; the rovers, the wingmen, the forward and back pocket players who have brought glory to themselves and the Old Dark Navy Blues for more than 150 years. So whenever the question is asked, “who has been the best of all Carlton’s small men?” a lively debate is assured. One thing is certain, however - the name Adrian “Gags” Gallagher would have to feature prominently in any informed discussion. Over eight seasons between 1964 and 1972, Gallagher teamed with champion ruckman John Nicholls and ruck-rover Serge Silvagni to form the greatest of all of Carlton’s first ruck combinations. A club leading goal-kicker and Best and Fairest, Gags was instrumental in bringing three Premiership banners to Princes Park.

Gallagher was recruited by the Blues in 1960 from Yarram in Gippsland. With the assistance of the club, he attended University High School, where he was an exceptional cricketer as well as a star footballer with Carlton’s Under 15, Under 17 and Under 19 teams. In 1963 he underlined his potential when he was voted Best on Ground in Carlton's Under 19 Premiership triumph, and that same season finished third in the competition's top individual award, the Morrish Medal.

By then Nicholls and Silvagni had been playing together for three seasons, with an array of different rovers at their feet. But almost as soon as Gallagher pulled on his guernsey number 10 to play his first senior match against St Kilda in 1964, the two big men found their perfect foil in the 179 cm, 73 kg red-headed youngster. Although Gags was not particularly quick across the ground, he was an instinctive reader of the play, a great crumber off the packs and deadly around the goals. His disposal skills by hand or foot were excellent, and he soon developed into a tough, durable competitor.

Adrian’s debut season as a senior player came at a pivotal time for the Blues, coinciding with the election of George Harris as President, quickly followed by the sensational recruitment of Melbourne champion Ron Barassi as captain-coach. Barassi energised the club, and three seasons later Gallagher experienced finals football for the first time before the Blues were eliminated by Geelong in the 1967 Preliminary Final. Gags’ 26 disposals and three goals in that match added to his growing stature, and established his credentials as a big-game player.

By 1968 there was no doubt that Nicholls, Silvagni and Gallagher were the most effective ruck combination in the game. Nicholls’ strength and exquisite palming skills, Silvagni’s tireless work ethic and Gallagher’s elite disposal made them a daunting proposition in every game they played. Most of the time Gags was a dependable rather than prolific goal-kicker, but in round 19, 1968 he had a day out – racking up 33 disposals and seven majors in a big win over Fitzroy at Princes Park. Just a month later, Barassi coached the Blues to a dramatic 3-point victory over Essendon in the Grand Final, with Nicholls, Silvagni and Gallagher all listed among the team’s best half-dozen players in Carlton's first Premiership for 21 years.

In round 19, 1969, Gags played his 100th game against Richmond at Princes Park on an afternoon when Brent Crosswell kicked 6 goals for the Blues, but the Tigers won easily in a portent of things to come. Although Gallagher was best on ground when Carlton easily accounted for Collingwood in the second Semi Final, neither he nor his team could hold the fast-finishing Tigers in the Grand Final, and the Blues were beaten convincingly in what Gags later said was the low point of his career.

But things turned around quickly, and although he missed the first six matches of 1970 because of injury, Gallagher went from the worst day of his career to revel in his best within 12 months. Playing intense, consistent football, he averaged 23 possessions per game on the way to taking part in – and winning - his third Grand Final in front of almost 122,000 fans when the disciplined Blues scored an almost impossible victory over Collingwood on September 26, 1970 at the MCG. And to make his contribution to that extraordinary win even sweeter, a few days later Gags edged out Alex Jesaulenko to be acclaimed as Carlton’s Best and Fairest.

The Blues suffered a Premiership hangover in 1971 and missed the finals on percentage, although Gallagher enjoyed another excellent season – kicking a second bag of seven goals against South Melbourne in round 17, before finishing runner-up to Geoff Southby as Best and Fairest. Sergio Silvagni retired at the end of that year, leaving Nicholls and Gallagher to collect their third Premiership in six seasons when Carlton endured a gruelling finals campaign and beat hot favourites Richmond for the ’72 flag.

To the chagrin of Carlton’s supporter base, that third Grand Final triumph was to be Gallagher’s last game in navy blue. Shortly afterwards, the VFL instigated a controversial and short-lived regulation that allowed players who had spent a decade or more at one club to become free agents, and sell their services to the highest bidder. North Melbourne was one of the instigators of this rule, and they made a huge offer to Gallagher - only to be trumped at the last minute by Footscray. The Bulldogs’ offer was simply irresistible and Carlton couldn’t match it, so after 165 games and three flags at Carlton, Gags headed for the Western Oval with plenty of good football left in him. 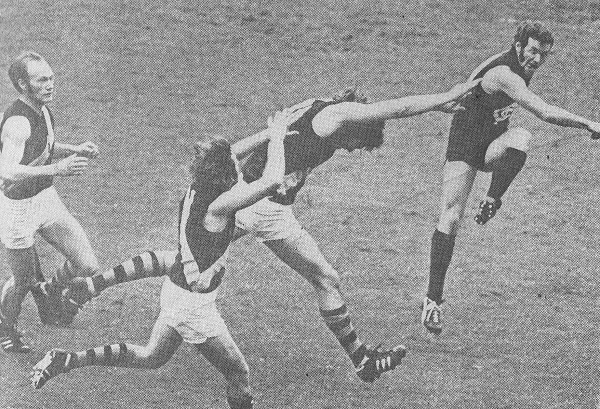 However, there was no Nicholls and no Silvagni at the Western Oval, and although Gags continued to play with his usual whole-hearted endeavour for the tri-colours, his three seasons there were largely unremarkable. At the end of 1975 he announced his retirement, having added another 54 games and 38 goals to his tally, only to make the briefest of comebacks for his former coach Ron Barassi at North Melbourne in 1976. But he was injured in his one and only appearance for the Shinboners, and never played again.

In the years after his playing career ended, Gags maintained his involvement in the game at various levels. When Barassi returned to coach Melbourne in 1981, he took Gallagher with him as one of his assistants. Then in 1992, after Gags was elected to the Carlton Hall of Fame, Blues coach David Parkin invited him back to Princes Park as a member of the match committee. From then on, he was a familiar face in the Carlton coaches box for more than a decade.

In May 2000, the Blues announced their Team of the 20th Century. The on-ball division?
Nicholls, Silvagni and Gallagher - of course.

In April 1971, Gallagher hit the headlines for the wrong reasons when Ron Barassi singled him out during pre-season training and ordered him to do 20 push-ups for not putting in a maximum effort. Gags refused, so Barassi suspended him from the opening match of the season against North Melbourne. The incident blew up when Gallagher’s future wife Suzie Colquitt went to the Melbourne newspapers to complain that Barassi was treating his players like schoolboys. Gallagher later said that he was penalised because Barassi believed that he was not sprinting at top pace in circle work. Gags explained that he was restricted because his new boots had given him blisters, but Barassi would not relent, so Gallagher didn’t play in the game that North Melbourne subsequently won by 26 points at Arden St.

After he retired from the game, Adrian ran a couple of inner-Melbourne hotels in partnership with his former team-mate Peter “Percy” Jones, including the Blush & Stutter in Carlton. During the 1980s, Gags and Percy were also co-hosts of radio programs on Melbourne station 92.3 EON FM.