Carlton easily accounted for Geelong by 52 points at Kardinia Park.

Carlton's effort in crushing an enthusiastic Geelong at Kardinia Park came as expected. The obvious reason for the tremendous effort was the indifferent performance the Blues produced against Essendon last week. Big John Nicholls had plenty of ammunition to stir up the Carlton players and they did not let him down. In fact, Carlton's players were so enthusiastic and desperate that a couple of them couldn't tell the difference between the colours and fought amongst themselves. There is no doubt Carlton is packed with talent and when nearly half the team can each gain more than 20 kicks it means the Blues are not relying on any individual to fire them. With fellows like Alex Jesaulenko, Syd Jackson and Adrian Gallagher all pin-pointing the ball right to the player's chest it makes it hard for the opposition to get its fair share of the ball. - Polly Farmer; The Australian.

Classy Win
As anticipated, Carlton is progressing steadily and successfully on its way. The Blues coasted to a 52-point victory over the vastly improved Geelong at Kardinia Park. Carlton had a few quiet players such as John Nicholls, Peter Jones and David McKay, who only earned six kicks each, but it was generally a team effort. Centreline players Alex Jesaulenko, Trevor Keogh and David Dickson were most damaging for Carlton , while centre half-forward Robert Walls completely outclassed the Geelong men tried against him. - Graeme Kelly; The Australian.

We needed to win this to make fairly sure of the double chance. It is never easy to beat Geelong at Kardinia Park and they have definitely improved a lot since we played them earlier in the season. - John Nicholls.

Doull's Duel
"Such was the thoroughness of the Blues that half back flanker Bruce Doull could allow dashing half forward David Clarke 23 kicks, yet still be congratulated. Clarke could be expected to win a game off his own boot with that number, but Doull harrassed him so much that at least 20 of those kicks were made under relentless pressure." (Peter McFarline, The Age July 31 p20)

Crosswell v Waite
I was at this match and the only thing that I remember is the"fight" between Vin Waite and Brent Crosswell. It was such an unusual incident that it comes to mind every now and then over these last 50 years.
This Age newspaper report (right) has now has been added. Now I know the reason why the "fight" happened! (blueycarlton) 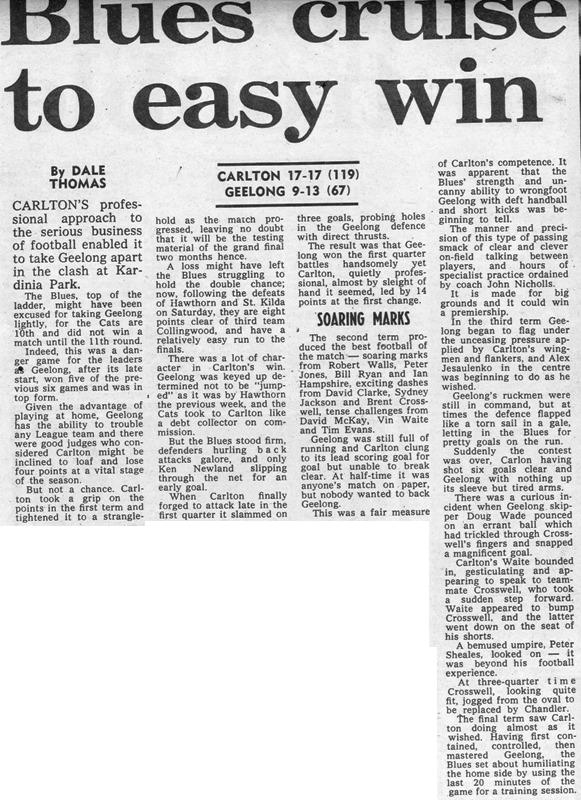