Blues Premiership #9 - Carlton defeat Essendon by 3 points at the MCG.


It is Saturday, September 28, 1968; a fine, sunny Melbourne spring day, and almost 117,000 fans have packed into the MCG for another Carlton-Essendon Grand Final. This will be the fifth time these two teams have met in a Grand Final since 1897, with honours even at two wins apiece. The MCG surface is dry and hard, but a strong, gusty wind threatens to make accurate kicking over distance near impossible. 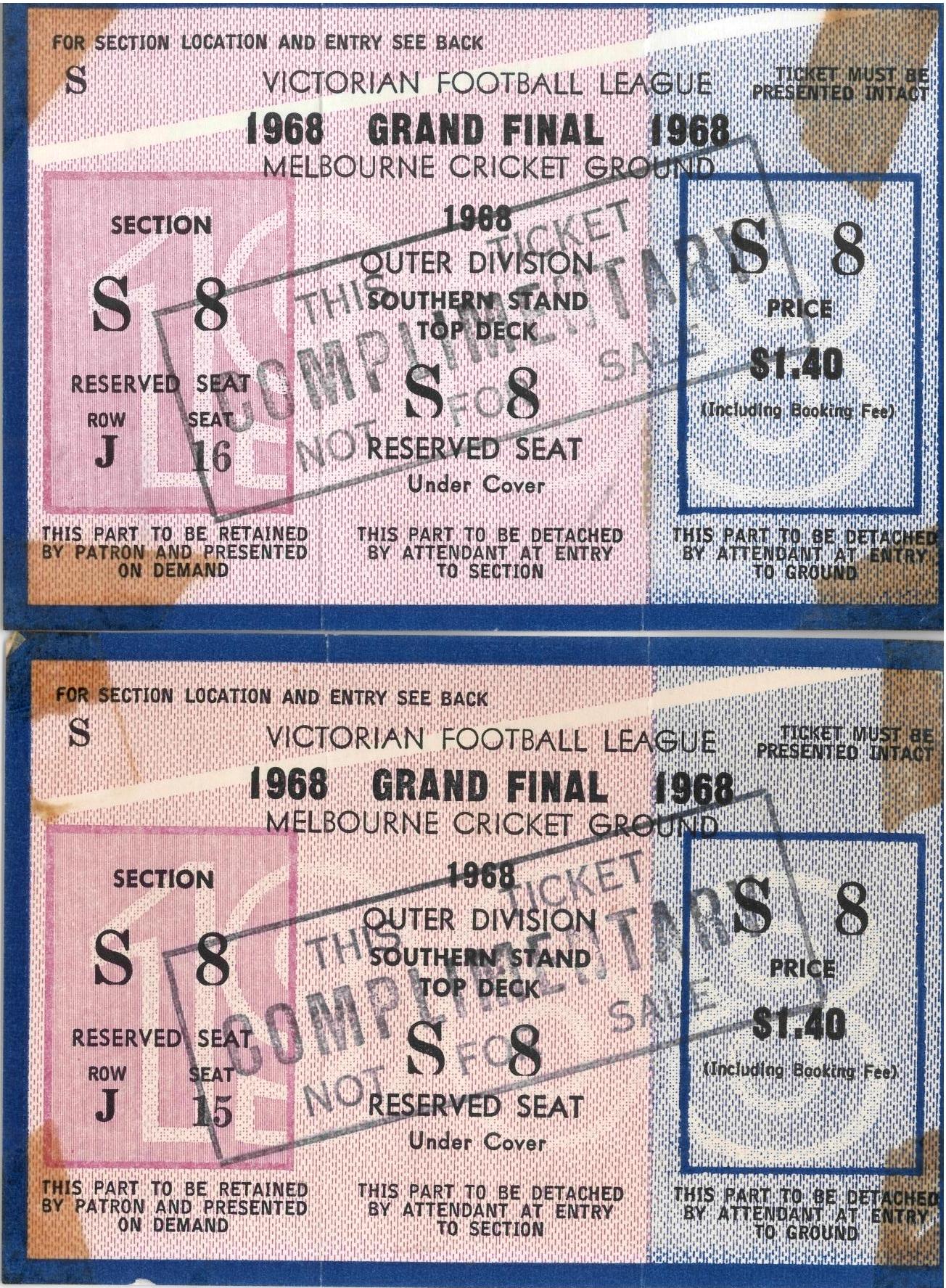 First Quarter : Essendon captain Don McKenzie wins the toss, and kicks with the wind to the scoreboard end. The teams line-up as selected, with Alec Epis picking up Alex Jesaulenko, and Barry Davis on Bryan Quirk at half-forward for Carlton. John Goold lines up at centre half-back on Essendon‘s key forward Alan Noonan. The Bombers' rookie full-forward Geoff Blethyn starts well on Wes Lofts, and scores Essendon’s first goal. Carlton’s reply comes from Garry Crane, whose wobbly kick forward eludes a pack in the goal square, and bounces through for full points. Essendon’s defence is resolute, while John Nicholls is dominant in the ruck against McKenzie. Crane, Robertson, Munari and lively full-forward Brian Kekovich are others prominent for Carlton.

Second Quarter : It’s a slugging battle of defences for the first 15 minutes. Carlton has the better of the play but inaccuracy is costly. Goal of the day comes late in the quarter after Essendon sends through its fifth major. At the centre bounce, Nicholls punches the ball thirty metres forward to be gathered by Jesaulenko, who, under pressure from Epis, chips a neat pass to Brian Kekovich in the pocket. Kekovich lines up and kicks truly for his fourth, and in time-on, Brent Crosswell goals again for the Blues to hold on to a slim lead.

Third Quarter : Injured Carlton defender Kevin Hall has been replaced by Peter McLean at half time. At full forward, Kekovich appears injured too, and now lacks pace on the lead. With the wind again in their favour, Essendon throw everything at the Blues. Crane is starring on his wing, and Sergio Silvagni is simply heroic as a loose man across half-back. Percy Jones takes over from Nicholls and continues to hold sway in the ruck, while Quirk’s goal late in the quarter is a beauty. Swooping on the ball at half-forward, he shrugs off two tacklers, and snaps truly for the Blues’ seventh.

Fourth Quarter : Jezza flies for a great pack mark and takes it on his chest. A minute later, he runs on to a handpass and shoots to an open goal from 30 metres, but misses. The momentum reverses, and suddenly Essendon senses victory. Blethyn’s fourth goal at the 20-minute mark cuts the margin to one point. Coach Ron Barassi replaces Bill Bennett with 20th man Neil Chandler, in one of the pivotal moves of the game. Chandler takes three crucial grabs in the last few minutes, and Carlton hangs on to win by 3 points - despite not kicking a goal in the last quarter.

Garry Crane is a worthy Best on Ground - as later judged by a panel of experts. Silvagni, Jesaulenko, Ian Robertson and Adrian Gallagher also do well, and Nicholls’ leadership is inspirational. Lygon Street rocks all week, while the Blues celebrate the dawn of the Barassi era.

This was Carlton 1,030th league game, and our ninth senior Premiership. The average age of the team was 23 years, 168 days, and the average experience was 69.4 league games per player. Peter McLean had been part of the 1964 Melbourne Premiership team as 20th man, but didn’t get on to the ground.


Barassi flies his first Blue flag
Carlton kicked a goal less than Essendon but still won by three points. The Blues were led by captain and coach Ron Barassi but he was not on the ground. That was where John Nicholls held sway. President George Harris said that he now knew what his dental patients felt having waited, waited and waited through the second half where Carlton scored just one goal, six behinds to Essendon's three goals, four behinds. Former Prime Minister, but still number one ticket holder, Sir Robert Menzies sent a telegram: 'From my hospital bed I give you three cheers for the boys today'. Luckily for the Blues they had a 13 point buffer at half-time - and could endure the last quarter where a kick from Brent Crosswell bounced in the goal square and took a hop like a Bill O'Reily leg break to score yet another behind. Aside from Nicholls' power in the ruck the mainstays of Carlton's win were speedy Garry Crane's 30 effective touches on the wing. Brian Kekovich's determined four goals and four behinds and Serge Silvagni's tireless work as a ruck-rover. A new record attendance for a Grand Final of 116,828 saw an uncompromisingly tough, tense game in which the marginally more skillfull but inaccurate team were in front when the siren sounded. - 100 Years of Australian Rules Football.


Carlton breaks its drought
In 1968 it was Carlton's turn to break a long run of 'outs'. The Blues went on a victory march for the first time since 1947, the year when Fred Stafford goaled in the last 40 seconds to give Carlton victory by one point. It had been a fitting tribute for Ron Barassi, the former dynamic Melbourne leader, who had been 'recruited' by the Blues to lift the club out of the doldrums. A bold, energetic administration spent plenty of time and money moulding the Blues and in the end it resulted in a three-point win over Essendon. Garry Crane, John Nicholls and Serge Silvagni were Carlton's best and Brian Kekovich, elder brother of North Melbourne's Sam Kekovich, was the top goal kicker with four. Nicholls and Silvagni were the hard core of the 1968 triumph and without one or the other, Barassi despite all his great coaching, would not have won the flag. - Football Life.

The thing I remember from this game is the wind, a horrible cross wind that destroyed a lot of the game as a spectacle. the other thing I remember was the Wes Lofts/Geoff Blethyn battle - and of course the controversy as to whether Lofts held Geoff's arm in an unrewarded free kick (in the last few minutes of the game(?) the Bomber fans felt would have won them the game.

Dad smiled after the ump called play on - that smile told me dad thought Loftsy was lucky. Dad knew Loftsy in those days through work at Mush and Millar, so apart from Big Nick, Loftsy was his favourite player.

I remember Jezza streaming forward into an open goal square but the wind dragged his kick wide - so many of our kicks went wide that year. It was my first Grand Final and will always remain my most cherished one. All game it was a tense, dour struggle and though the blues seemed to have a lot of the play the wind meant we never broke away.

At the end the siren sounded and we were the winners! The first of Carlton's flags in my lifetime and I was there to witness it!

200 Games: John Nicholls
Interesting Fact: This is the only grand final where the loser scored more goals that the winning side
Last game: Bill Bennett, Brian Kekovich and Peter McLean