Carlton smashed Hawthorn by 128 points in a scoring spree at Princes Park, and posted the Blues' highest ever score. Jones kicked 7, and Jezza 6.12!

Carlton’s first home match of the 1969 season - against Hawthorn at Princes Park - began with the unfurling of the ‘68 Premiership pennant, and just got better from there. An unforgettable experience for every supporter of the Navy Blues, Carlton went on a scoring rampage from the first bounce, and piled up a then-record VFL score of 30.30.210 to crush the hapless Hawks by 128 points.

Although Carlton was fielding a team that featured 15 members of the previous year’s Grand Final side, this match was considered something of a danger game for the Blues. Hawthorn had finished sixth in 1968, but were rated as definite improvers, especially so because they had a champion in Peter Hudson at full-forward.

The match got off to a willing start with hard physical clashes all over the field. After one skirmish, Carlton full-back Wes Lofts was reported for striking Hudson, and not long afterward the floodgates crashed open. With Alex Jesaulenko a focal point up forward, Carlton’s centre line and ruck division took control. The latter part of the first quarter was played exclusively in Carlton’s half, and at the first break the Blues were 22 points up.

Rover Adrian Gallagher missed three shots at goal early in the second quarter, then the attack was switched through ruckman Peter ‘Percy’ Jones in the forward pocket. Marking strongly, and directing traffic with intelligent work around the packs, Jones steered through three of Carlton’s seven goals for the quarter, and at half time, the lead had blown out to 55 points.

The Blues added another five goals (and seven behinds) in the third quarter. While Jesaulenko was dominating around the goal-front, his kicking for goal was inexplicably wayward, and he was to end the game with a personal tally of 6.12. Jones was making up for his captain’s waywardness however, and would finish the day with 7.3.

If Hawthorn’s spirit wasn’t broken by the ten-goal deficit at three-quarter time, then the brilliance of Brent Crosswell in the last term shattered them completely. Running rampant through half-forward, ‘Tiger’ kicked four brilliant goals in succession as the Blues galloped away to the highest score, and the biggest winning margin in the club’s history.

When wingman Ian Robertson lined up a shot on goal just as the final siren sounded - and kicked truly to register the Blues 30th major - it was only the third time in VFL/AFL history that this feat had been achieved. More than forty years later, the records set on that amazing day at Princes Park still stand – while the memories will always burn bright for every Bluebagger fortunate enough to have been there.

After the results in the first round of the season, the team selectors for the 12 clubs made a total of 33 changes for the second round. The most important were by Carlton who put in Brent Crosswell, Ian Nicoll and Ron Stone for the main game against Hawthorn. The Blues changes must have helped because they scored a VFL record score of 30.30.210 to Hawthorn's 12.10.82 to jump to the top of the ladder with two wins and a percentage of 181.4. The downside of this victory was that Carlton full-back Wes Lofts was suspended for four games. The tribunal took only 10 minutes to find him guilty on charges laid by field umpire Jeff Crouch and boundary umpire Barry Wood. - Football Life. 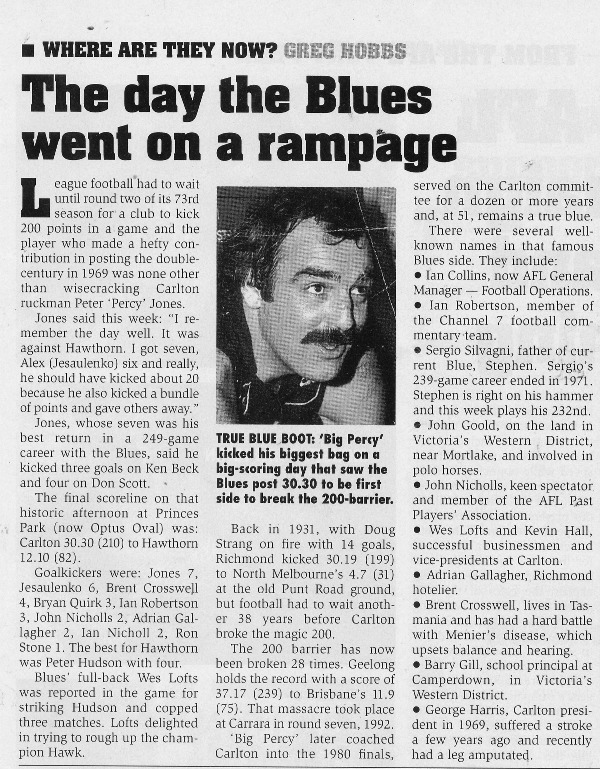 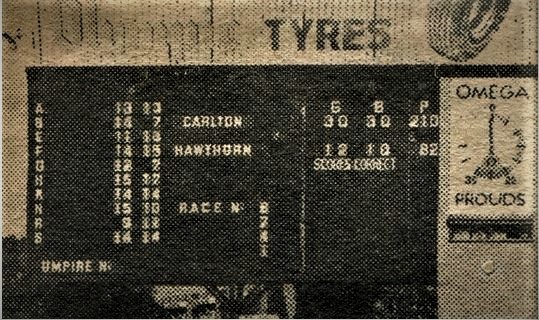 Jesaulenko's 12 behinds remains the most by a Carlton player in a single game
It was the most scoring shots in a game (60) then and it still in second place now.