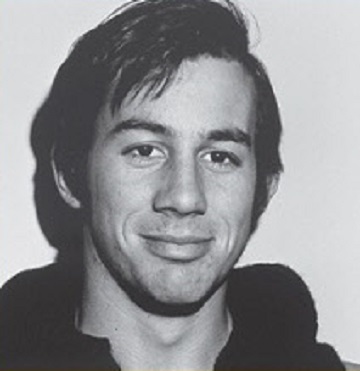 Brent ‘Tiger’ Crosswell was a brilliant, yet enigmatic star at Carlton during the Barassi era. A brash, flamboyant individual capable of winning a game off his own boot with quarter or two of inspirational play, he was also at times prone to infuriating lapses in concentration. First and foremost, Crosswell was a big occasion player – perhaps the best of his time. On a cold and wet day at Glenferrie or the Western Oval, he could often seem disinterested - but on a fine afternoon at the MCG, in front of a big crowd, he was tenacity and skill personified.

Hailing from Campelltown in Tasmania, Crosswell was discovered by former Carlton centreman Berkley Cox, who was impressed when he saw the 17 year-old playing inter-school football for Launceston's Scotch College in 1967. Brent was never comfortable with the regimented college life, and so found an outlet for his youthful frustrations on the football field - even though he never totally embraced the close mateship of club culture. When they first met, Carlton coach Ron Barassi was intrigued by the skilful, highly intelligent youngster, and the pair went on to share triumphs and tribulations at two clubs during Crosswell's 14-year VFL career – even though, as individuals, they were chalk and cheese.

Barassi, the fierce disciplinarian who demanded maximum physical and mental commitment from all his players, was often left dumbfounded by Crosswell, who delighted in quoting classical English poetry to his coach, and to his opponents. Seemingly unmoved by Barassi's fiery tirades at training or during matches, Crosswell would simply offer to sort out the pairs' differences later - on the tennis court, or over a chess board. These matches he invariably won. Then time after time on the weekend, he would go out and win an important game for the Blues with a jaw-dropping burst of football magic.

Crosswell played his first game for Carlton in round one of the 1968 season, wearing guernsey number 17. A classic high mark, quick and intuitive, he won our best first-year player award that year, and went on to be an integral part of the triumphant Grand Final win over Essendon. He played in our losing Grand Final team of 1969, then won his second Premiership medal when he was one of Carlton's real heroes in that extraordinary 1970 decider. He missed the '72 Grand Final through injury, played in our unsuccessful Grand Final team of '73, and early in 1975 - to the chagrin of just about every true Blue supporter - was cleared to rejoin Barassi, who by then was coaching North Melbourne. He had played 98 games for Carlton, scoring 92 goals. 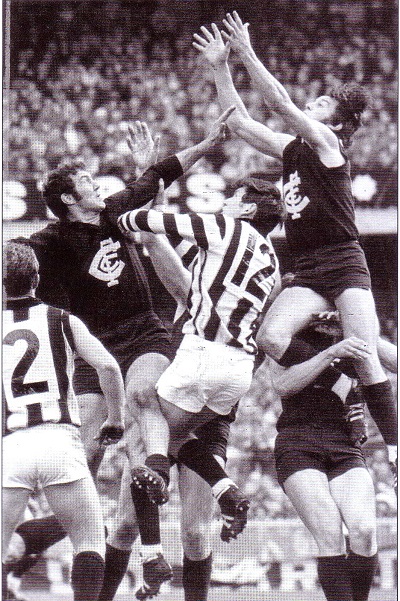 Barassi had given Crosswell something of a free rein at Carlton, playing him as an offensive weapon at ruck-rover, half-forward or in the centre, where his 185cm, 81 kg frame was ideal for these roles. When he arrived at North in 1975 however, he began spending more time in defence. One of the enduring memories of that era occurred in the '75 Grand Final between North and Hawthorn. With the game in balance, Barassi sent his runner out to switch Crosswell from full-forward to full-back. Tiger strutted from goal square to goal square, leaving friend and foe alike in no doubt at all about his intentions. From that moment on, Hawk full-forward Michael Cooke was held goalless, and the 'Roos won their first flag by a massive 55 points. Two years later, North won their second (and Crosswell's fourth) Premiership when they skittled Collingwood by 27 points in the replay of the previous week's famous drawn Grand Final.

After another 76 games and 108 goals for the 'Roos, Crosswell crossed to Melbourne in 1980. He played a further 48 games for the Demons and booted 57 goals before retiring in 1983. In the later stages of his career, and into retirement he became an incisive, often controversial writer on the game. He admitted dabbling with marijuana and once described himself when playing as ‘half crazy, sulky, petulant, ostentatious and lairising.’ In his highly successful stage production, ‘The Club’, playwright David Williamson is said to have modelled his character Geoff Hayward - the gifted, pot smoking country recruit - on Crosswell.

On the 6th of July 2012, Brent Crosswell was inducted into the Tasmanian Football Hall of Fame.

A link to his amusing interview on The Footy Show is provided here. Alternatively, one can also access it by referring to the interview section below.
https://www.youtube.com/watch?v=D5Tn5UL6G5o&pbjreload=101

Articles: The 1970 Prelim: Ragsy, Jacko, Jezza and Brent | The Fish that Got Away