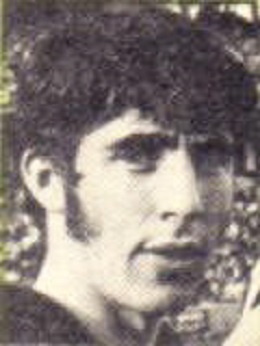 Some men, it is said, are born to greatness; while others have greatness thrust upon them. In a football sense, it is hard to deny that Barry Mulcair’s career at Carlton fitted squarely into the latter category. At first a reluctant recruit for the Blues, he changed his mind at precisely the right time, and etched his name into club history when he was a member of Carlton’s celebrated 1970 Premiership team in just his thirteenth senior game.

By the time the 1970 VFL season began, Carlton had been trying to recruit Mulcair from his hometown club South Bendigo for months. A defender with excellent judgement, good all-round skills and a cool head under pressure, he eventually agreed to terms and arrived at Princes Park midway through the year. Then, after only two shakedown games with the Reserves, he was thrust straight into the big time when he lined up on a half-back flank against Geelong at Princes Park in round 13 of that year.

Wearing guernsey number 35 and playing alongside John Goold (in his 100th game) Mulcair delighted the match committee by showing poise and good concentration as the fifth-placed Blues accounted for the second-placed Cats by 13 points. From there, Carlton steadily improved through the second half of the season. When the finals rolled around, the Baggers had displaced Geelong from second spot on the ladder, and were poised to challenge the front-runners Collingwood.

Mulcair breezed through his baptism of fire in the finals with further aplomb, despite an incident in Carlton’s big Preliminary Final victory over St Kilda when he and his team-mate Bryan Quirk collided, and Quirk dislocated his shoulder. Barry recovered and played on, but Quirk left the field and was soon ruled out of the following week’s Grand Final against the Magpies, who were raging-hot favourites for the flag.

Every Carlton fan knows that the Blues won the unwinnable Grand Final in 1970, storming back into the contest from 44 points down at half-time to skittle Collingwood by ten points. Mulcair’s game on that incredible Saturday afternoon mirrored most of his team-mates. His opponent, Con Britt, had the better of him early, but Barry stuck to his task and kept the dangerous Magpie under a tight rein after half time. One of Carlton’s real heroes that day was rover Ted Hopkins, who was called onto the ground after half-time, and sparked the Blues incredible revival with four telling goals. Surprisingly, Ted retired after just one more game in 1971 – believing that he had achieved all that he could have hoped for as far as football went. Later that same year, Mulcair was to follow suit. 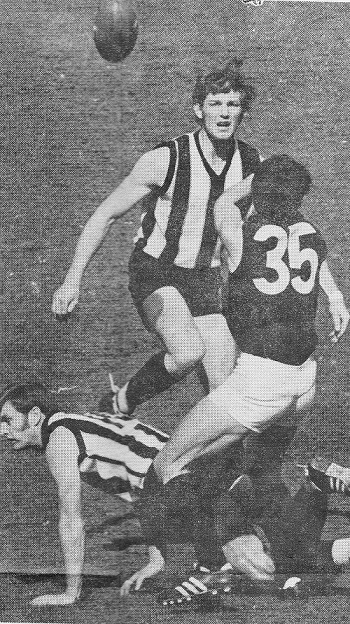 Barry played the first six matches of 1971, before his form tapered off, and he was sent back to the Reserves while Carlton endured a quite understandable Premiership hangover. He was eventually recalled for one final game – the 20th of his career – in the last round of the home and away season, against Collingwood at Princes Park. Still basking in the afterglow of the previous year, the confident Blues did it yet again on that late-winter Saturday afternoon – recovering from 20 points down at three-quarter time to beat the finals-bound Magpies by 19 points.

Along with Mulcair, three other notable Blues in Sergio Silvagni, Ian Collins and ex-Richmond star Bill Barrot also finished their VFL careers on that same day. Despite that loss of class and experience however, a resurgent Carlton side collected yet another flag in 1972. By then, Mulcair was back at South Bendigo, where he continued to play and coach for the next decade.

1972 GF - Jackson about to collect the footy watched by Dickson & McKay.