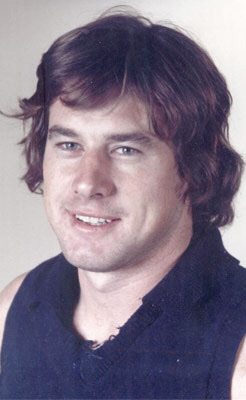 Daniel Francis Halloran was a popular clubman and a handy contributor for the Carlton Football Club throughout his three seasons of senior football from 1975 to 1977. The son of Frank Halloran, who played three matches for Melbourne in 1935 and four for Footscray in 1937, Danny joined the Navy Blues from Kyneton – the same club that produced his promising team-mate Jim Buckley.

After leaving school, Halloran trained as a physical education instructor, which benefited his football considerably. Well-proportioned at 189 cm and 95 kg, his strength and endurance were real assets in an era when physical intimidation was still widely practised on the football field.

When the Blues presented him with guernsey number 31, famously worn by the legendary Ron Barassi at both Melbourne and Carlton, Halloran was inspired. He started 1975 with a string of eye-catching efforts at Reserves level, and was selected to make his senior debut as 20th man against Collingwood at Victoria Park, six days before his 21st birthday in July. Carlton won by 16 points to get Danny’s career off to a flying start, although each of his four games that year began from the bench.

In 1976, Carlton coach Ian Thorogood and the match committee assigned Halloran to a half-forward flank, where his determined attack on the football created opportunities for his team, and provided a viable avenue to goal. He kicked his first major in a 12-point win over Essendon in round 2, and seemed to have grasped a permanent place in the side when he was retained for seven of the first eight games. However, a lapse in form in the second half of the year saw him play only three more times before the Blues finished the year as minor premiers, then lost an enthralling Preliminary Final to North Melbourne by one point.

Halloran began 1977 as 19th man in round 1 against Geelong at Kardinia Park, and celebrated a dream start when the Blues destroyed the home side by 78 points. But barely days later, his world crashed down upon him when he suffered a badly-broken ankle while ice skating, and that injury ended his VFL career.

In 1978, Danny took up an appointment as a PE instructor at Shepparton High School. He resumed playing football for Shepparton, and later transferred to Mooroopna. His ankle continued to trouble him however, and kept him out of the Cats’ 1985 Goulburn Valley Football League Premiership team.

Then on February 17, 2012, everyone associated with the Kyneton, Carlton, Shepparton and Mooroopna Football Clubs was shocked and saddened by the news of Danny’s sudden death at the age of 57. He had passed away in his sleep at his home in North Melbourne, leaving a large family, and friends from all walks of life.

Carlton FC Article on the passing of Danny Halloran