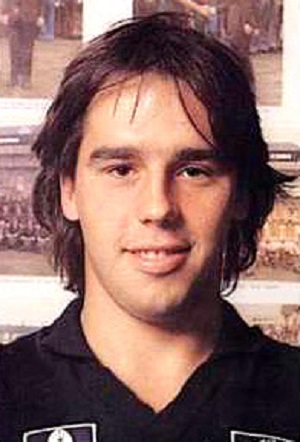 A wonderfully versatile and consistent player in three Carlton Premiership teams, Peter James McConville was recruited by the Blues from Bendigo League club Golden Square in 1977. His grandfather, Tom McConville, had played 35 matches for Melbourne in the 1920s, after being recruited from Colac. Although all of his family were keen Melbourne supporters while he was growing up, Peter became a Carlton devotee from a young age, after venturing down to the MCG to watch the Demons play the Blues. Carlton won the match that day, as well as the youngster's heart.

In 1976, 17 year-old McConville played on a wing when Golden Square beat Kyneton in the BFL Grand Final. The following year, he kicked 100 goals at full-forward for the Bulldogs after being switched to the key post during an early-season Bendigo League representative game. Equipped with precise judgement, strong hands and a powerful leap for the ball, McConville played tall, and his accurate right foot made him dangerous anywhere forward of the centre. Bendigo was Carlton’s exclusive recruiting zone during that period, and by Christmas 1977 Peter was sweating through pre-season training at Princes Park.

Allocated guernsey number 33 by the Blues, “Macka” impressed each time he appeared in those early practice matches, so it wasn’t surprising when he bypassed Carlton’s Reserves team to make his senior debut at full-forward against Richmond at the MCG in the opening round of the 1978 season. Although the Tigers crushed the Blues on that occasion, McConville’s 11 possessions, four marks and three goals made quite an impact, especially when he was awarded Mark of the Day by Channel 7's World of Sport. Peter then went on to complete an impressive first season for the Navy Blues, playing 18 games (generally at full-forward) for 38 goals. Carlton wound up fifth on the ladder, before falling to Collingwood in a hard-fought and entertaining Semi Final in front of almost 92,000 at the MCG. A week or so later, McConville was acclaimed as Carlton’s Best First Year Player.

As many others have done, and continue to do, Peter suffered from the second-year blues in 1979. By early August he had played only 8 games for 8 goals at full-forward, so Carlton’s match committee sent him back into defence to freshen up. “Macka” responded in spectacular fashion, running and jumping at the football with a new-found freedom, and setting up numerous attacks from half-back. On the last Saturday in September of that year, McConville played his 31st match for Carlton in his first VFL Grand Final, against Collingwood at a packed MCG – and emerged victorious, thanks to the heroics of his fellow defender Wayne Harmes.

In 1980, Peter became Carlton’s Mr Fixit – a player who could be thrown forward or back at a moment’s notice, and relied upon to do whatever was required. His high marking remained his strength, leading legendary North Melbourne and Hawthorn coach John Kennedy to describe him as the best aerialist in the competition, and his value was not lost on the Carlton match committee or Blues supporters either. Despite his relative lack of inches, “Macka” could match it with most opposition talls, and was still agile enough to play on the smaller, quicker types.

A new senior coach in David Parkin arrived at Princes Park in 1981, leading to many changes on and off the field. Under Parkin, McConville rediscovered his goal-kicking mojo and picked up his second Premiership medal when the Blues recovered from a 9-point deficit at three-quarter time in the Grand Final to emphatically beat the Magpies. On the way to that triumph, Peter kicked 35 goals in 21 games over the season, including successive hauls of five majors against Geelong in round 8, and South Melbourne in round 9. He was selected at full-forward in the Grand Final, but that was a ruse. Before the opening bounce, “Macka” picked up Collingwood’s monster forward Rene Kink, who ended the game beaten, goalless, and with his name on the umpire’s report sheet.

In 1982 it was a similar story. McConville began the year with another 5-goal haul against Fitzroy in round 1, but by finals time was thrilling the crowds with his aerial feats in Carlton’s defence. As the Blues battled their way through another tough final series, he was rock-solid on the big stage, racking up 15 disposals, 6 marks and two goals as the Blues vanquished Richmond in another action-packed Grand Final to claim their third flag in four years. 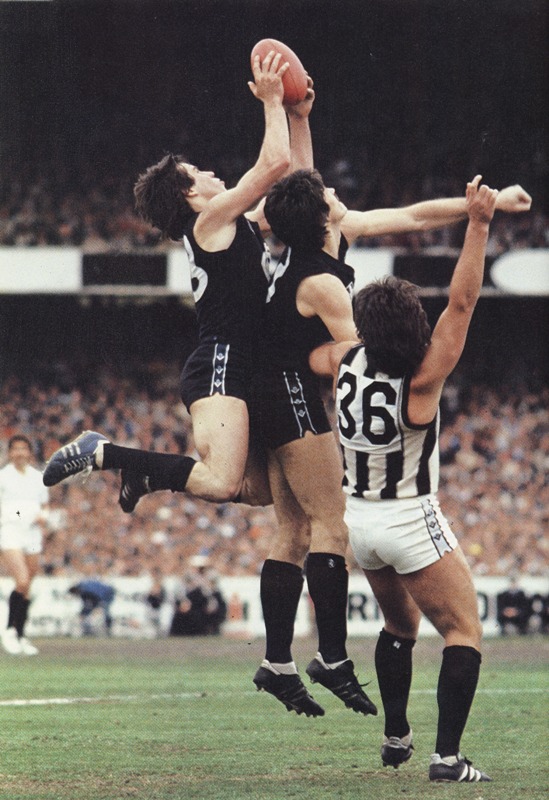 Peter played the 100th game of his career against Geelong at Princes Park in round 6, 1983, and soon afterwards was selected to represent Victoria in the Australian Football Championships. However, in what was to be his only state game, he suffered a torn knee cartilage in Victoria’s first match against South Australia, and was sidelined for months. Eventually, he was recalled for the Blues’ meek loss to Essendon in the Elimination Final, when it was revealed that he had hurt his knee in a club game prior to the Big V clash, but disguised the severity of the injury and damaged it further.

Having regained full fitness, McConville played consistently well again throughout 1984 and ’85, as Carlton remained a perennial finals contender. In the 1985 Elimination Final against North Melbourne, “Macka” was thrown forward early on when Wayne Blackwell twisted an ankle, and his three goals were valuable, but the Shinboners dominated the second half and won by 19 points. Although he didn’t know it then, Peter had just played his last game for the Navy Blues.

McConville came out of contract at the end of that season, and said later that he would have been content to stay at Princes Park - until St Kilda came calling with an offer that was just too good to refuse. Carlton couldn’t or wouldn’t match what was on offer from the Saints, so right on the deadline for clearances, club secretary Ian Collins - at the behest of the match committee - cleared McConville and popular ruckman Warren 'Wow' Jones to Moorabbin. Both were fine players for their new club, where McConville's aerial prowess and consistency quickly endeared him to the St Kilda faithful. He added another 54 games and 23 goals to his credit with the Saints, before retiring in 1990 because of a chronic hamstring injury.

Those who saw Peter in action throughout his illustrious career still believe that he was good enough to hold his spot at Carlton, even with the influx of interstate talent that landed at Princes Park during 1986 and ’87. Had he remained a Bluebagger, he may well have added another Premiership medallion to his collection after the 1987 Grand Final, but that was not to be.

Bendigo All Stars Team (1972-1997).
In 1997 the Bendigo FL compiled their best team for players originating from the BFL VCFL zones for the period from 1972 - 1997, McConville was named on the half-back flank in that team.

The Captain, the Doctor and the President, 1950.jpg