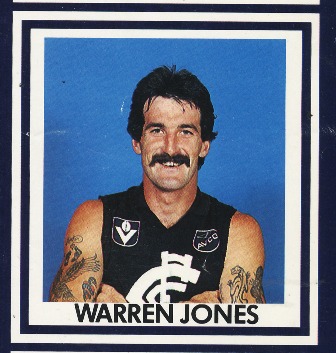 
Warren "Wow" Jones added more than his share to the rich tapestry of the Carlton Football Club in his 92 games for the Blues between 1978 and 1985. Perhaps best remembered for the myth that grew from his nickname, Wow was a heavily-tattooed giant at 200 cm and 102 kg - but one whose forbidding appearance hid a surprisingly gentle nature off the field.

Jones was born in Wellington New Zealand, before growing up in Queensland. He learned the Australian game with Morningside Football Club, and later moved south to Castlemaine in central Victoria. When Carlton recruited him, he was a match-hardened 24 year-old whose determination and ruck skills - especially his palming of the ball to his rovers – made him the ideal back-up for Mike Fitzpatrick. Jones was handed the fabled number 2 guernsey, and didn't disappoint. During his eight seasons with the Blues, he represented Queensland in 1979 and played in seven finals, including his finest moment; the 1982 Grand Final. In an epic match, Wow was one of the keys to Carlton's upset win over Richmond when he almost single-handedly took on and subdued the Tiger ruck duo of Mark Lee and David Cloke.

When Fitzpatrick retired in 1983, Wow assumed the mantle of number one ruckman, only to be struck down by glandular fever while in the best form of his career. It took him more than a year to recover, and when he did return, he was confronted by the emerging talent of a young Justin Madden. Aged 31, Wow knew his time at Carlton was almost up. So when St Kilda made him an attractive offer in 1985, he crossed to the Saints (with Carlton’s encouragement) and went on to play another 31 games in three seasons. His efforts at St Kilda were as whole-hearted as ever, and the big bloke was soon as popular at Moorabbin as he had been at Princes Park.

In 1989, Warren Jones headed to VFA club Brunswick with fellow premiership team-mate Wayne Harmes. He also assisted Col Kinnear as a specialist ruck coack for the Sydney Swans in 1989. The following year he quit as a player and headed back to St Kilda as an assistant coach with ex-teammater Ken Sheldon, he also coached the Saints reserves at the same time.

So then, what about his nickname? Well, from early in his career, and long after his departure from Princes Park, it was widely claimed that as well as the tattoos that covered both his arms, he had permanent artwork on other parts of his body - including the letter W prominently displayed on each cheek of his posterior. Consequently, if a naked Mr Jones should turn his back and bend....wow!

Since his retirement Jones has been regularly quizzed on the matter, but has always denied that such tattoos existed. Apparently, it all began in his early days at Carlton, when he joked with a number of guests at a club function about having them done. Because of his appearance, joke became fact, and since it was such a good story, it spread quickly. Jones happily went along with the nickname, but never put the issue beyond doubt by baring all.

While it did him no real harm, Wow Jones deserves to be remembered for much more than just his nickname. He was a loyal, committed and honest performer for the Blues – a player who made the most of his opportunities, and forged a fine career.