The Blues beat Sydney by 44 points at the SCG, in Justin Madden's 200th game. 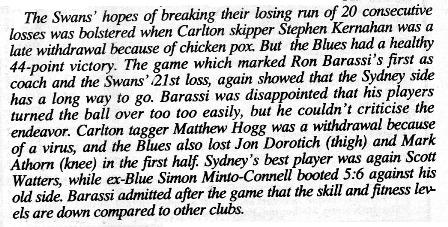 Carlton took on bottom placed Sydney at the SCG and came away with the points in this Round 7 game. This result may seem a little odd to readers – it is rare enough for Carlton to get to play to our Sydney based fans over the past decade or so, let alone actually beat the Swans, but at the time, Sydney were a struggling club who could not crack it for a real crowd. You may remember the old guys who used to stand behind the goals on the left side of screen? A crowd of 9,214 signified how hard it was for Aussie Rules in Sydney at the time.

Carlton, without Captain Kernahan and normal Centre Half Forward Earl Spalding, restructured the forward line and Dorotich, Welsh and youngster Brendon Parker (in his only game for the year) would bring us home. Bradley would be the main possession winner with 36, with Brown, Williams and Dean are other achievers for the day. Bradley would poll the 3 Brownlow votes, 2 to Dean and a Swan named Paul Bryce would take the 1. Former Blue Simon Minton-Connell would kick 5 for the Swans.

The win would propel the Blues from 10th to 5th in a year where a number of teams would appear to be on the cusp on making the Final 6.