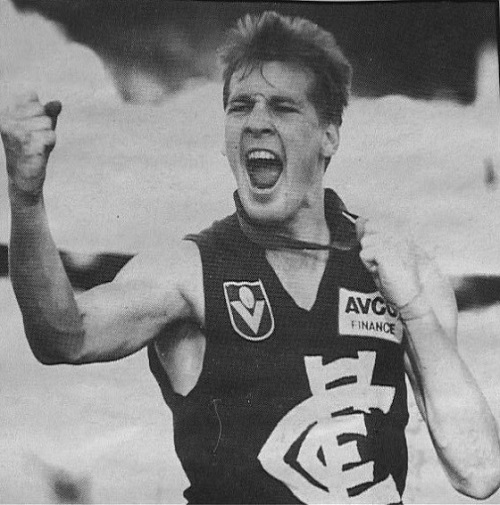 For much of his career, David Glascott could have been mistaken for a young public schoolboy rather than a star VFL footballer. But looks are often deceiving, because despite his slender build, blonde hair and baby face, Glascott was a tough, skilful competitor and a key member of three Carlton Premiership teams.

Originally from Thomastown in Melbourne’s north, David started his VFL career on a high when he played in Carlton’s 1979 Under-19 flag side. He then worked his way up through the Reserves team to make his senior debut against Fitzroy at Princes Park in round 3, 1981 - bringing to fruition the dreams of a determined young man who had been a lifelong Carlton fan. Glascott’s football idol at that time was the Blues’ champion defender Bruce Doull, so it must have been an enormous thrill for the 19 year-old to run out on to the ground and play his first game alongside his hero.

Glascott also greatly admired Carlton’s Under-19 coach Bryan Quirk, so when he made Carlton’s senior list, David was quick to request the same guernsey number (32) that Quirk had worn in the Blues’ 1968 Premiership team. Wearing that number, David spent most of his first Saturday afternoon as a senior player on the bench, as Carlton recovered from a 6-point deficit at three-quarter time to beat the ‘Roys by 16 points.

By midway through that season, Glascott had played another four matches as Carlton coach David Parkin eased him into a team that was already among the flag favourites. But the blonde youngster’s 27 disposals and relentless tackling against Hawthorn in round 12, 1981 demanded a regular place in the side, and from then on he quickly became a favourite of the Carlton crowds. It wasn’t just his ability to get the ball and use it to advantage that caught the fans’ attention; they loved the enthusiastic way he chased down and tackled even the biggest of opposition players.

On Saturday, September 26, 1981, Glascott’s fairytale first season culminated in the best possible way. On that cool, overcast afternoon, he played his fifteenth senior match in front of a crowd of almost 113,000 at the MCG - against Collingwood in that season’s Grand Final. Matched at various times against two of the game’s best and most experienced wingmen in Ricky Barham and Warwick Irwin, Glascott played with a passion and maturity that belied his tender years. He more than matched both of his opponents, as Carlton triumphed by 20 points.

One day short of twelve months later, David collected his second Premiership medal when the Blues survived an early physical onslaught from Richmond to win their third Grand Final in four years. This time, Glascott was given a defensive winger’s role on Tiger star Brian Wood, and kept Richmond’s former captain on a tight leash all game as Carlton won by an even three goals. 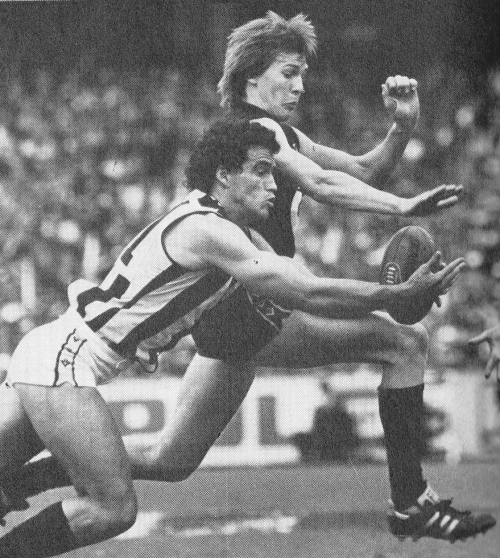 As he matured into an elite player, David became more of a true utility, and developed a taste for kicking goals. In 1985 he was honoured with selection in the Victorian state squad for matches against SA and WA, and in July 1986 he played his 100th game for Carlton on the same day that Bruce Doull chalked up number 350 with a big win over North Melbourne. Later that year however, Doull’s magnificent career ended in a bitter Grand Final loss to Hawthorn. The Hawks ran rampant on that awful afternoon when Glascott shared the roving duties with Bernie Evans and was one of the few Blues to escape criticism for his efforts. It was a defeat that burned deep at Princes Park, but revenge was not far away.

Meticulous planning by Carlton’s new coach Robert Walls and his staff, plus some judicious recruiting, paved the way for the Blues to earn another crack at Hawthorn in the 1987 Grand Final. Enjoying his best season to date, Glascott hadn’t missed a game all year and had represented Victoria in a second interstate series. Then in September, he ran out to play in his fourth Grand Final, with the huge task of tagging the Hawks’ star rover John Platten. On a baking-hot Saturday afternoon in front of 93,000 at the MCG, Platten played a serviceable game, but Glascott was outstanding with 24 possessions, 7 marks and 3 tackles as Carlton demolished Hawthorn by six goals.

Glascott’s consistency continued through until 1989, when his injury-free run was abruptly ended by a dislocated shoulder in round three against Geelong. During his recovery after surgery, David worked tirelessly around the club in a multitude of ways - mentoring the younger players, and organising social functions with an enthusiasm that was rewarded with that season’s Best Clubman award.

When he did make it back to training in 1990, the Blues had another new senior coach in Alex Jesaulenko, who asked David to take on the role of captain of Carlton’s Reserves team. Of course this meant that Glascott was no longer an automatic selection in the seniors, but he didn’t hesitate to accept. He still played 10 senior games over the year, and the seconds won the Premiership under his leadership with a hard-fought Grand Final victory over Melbourne. In a ruck-rover role, David was widely acknowledged as Best on Ground.

Glascott was 30 years old when he retired after the 1991 season, with three Premierships, 173 games and 81 goals to his name. The following year he joined VFA club Frankston where he finished his playing career, and in 1994 he was appointed senior coach of Perth in the WAFL. The Royals were rebuilding at the time, and successes were few, but David stuck to his task for two seasons before returning to Victoria.

In 2001, Glascott was elected to the Carlton Hall of Fame. Then club captain Brett Ratten was among those generous in his praise, saying that it was Glascott who had kick-started his career by urging him to “seize his place” in the senior team.

While his football career developed at Carlton, Glascott maintained an academic career that had begun at Thomastown Technical School. After year 9, he transferred to University High School, and eventually achieved a Bachelor of Education.

Between 1978 and 1986 the VFL staged a mid-week night-time competition involving clubs from the VFL, SANFL and WAFL, as well as representative sides from NSW, ACT and Tasmania. Glascott was a member of the Carlton team that won the competition in 1983, and thus became the only Blue to have won Under-19, Reserves, Senior and Night Premierships.

Prior to taking over Carlton’s guernsey number 32, David wore Nos.51 and 52 in 1980 while playing with Carlton's Reserves.

David’s younger brother Stuart Glascott also played with Carlton’s Under-19 and Reserves teams from 1983 through to 1985, before heading north to Queensland. After some impressive performances in the QAFL with Southport, Stuart was recruited by the Brisbane Bears ahead of their entry into the AFL, and eventually played four senior games in the club’s first season in 1987.