Carlton smashed Footscray by a mammoth 129 points at Princes Park... 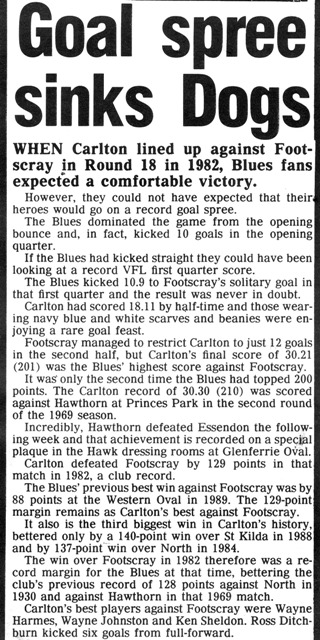 Fifty-one scoring shots. Just think about that for a second - 51 scoring shots! The Blues pole-axed a woeful Footscray outfit at Princes Park, and continued to build up an impressive head of steam nearing the end of the 1982 home and away rounds.

This was Carlton's second-highest scoreline ever (the second occasion where we have cracked the 200 point barrier), and our greatest winning margin over the 'Dogs. It was also the day in which Carlton defender Val Perovic kicked his only goal in Navy Blue.

Clever Carlton utility player Wayne Harmes was awarded top votes for his game against Footscray. It was a typically eye-catching and efficient display from Harmes as he thwarted his Footscray opponents. Wayne Johnston was also very effective from a half forward flank where he bagged four goals. - Inside Football Player of the Year.

''Sleeping Dogs.......
Carlton, after being humiliated at Geelong the previous week, rebounded and destroyed Footscray in one quarter of aggressive football on Saturday. Carlton coach, David Parkin, delivered a few verbs on-field before the first bounce and the Blues responded with a 10 goal burst. Prime movers in the onslaught were Wayne Harmes, in his unusual role on centre wing, and Ken Hunter, whom Footscray allowed the luxury of not minding a man. The Bulldogs brainstrust was caught napping, as Hunter combined brilliantly with Harmes to set up attack after attack. Other significant moves by Carlton included the assigning of Peter McConville to dangerous Bulldog, Jim Edmond, and the placement of Robbert Klomp at centre half forward. Klomp added fire and bite to the Blues attack while McConville shut Edmond out of the game. - Peter Hogan Inside Football.''

Footscray's Simon Beasley kicked 7.5 but the Bulldogs still went down by 129 points to Carlton. Wayne Harmes and Wayne Johnston were brilliant for the Blues while Beasley was Footscray's only winner. - Football Record.