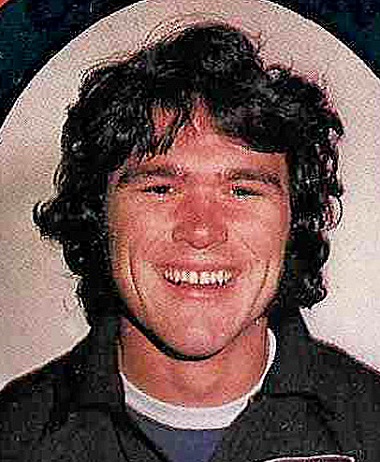 A long-kicking right-footer with an impressive leap, Peter Brown was recruited by Carlton in 1976 as a 17 year-old from the tiny central Victorian town of Campbell's Creek which is located near Castlemaine. Over the ensuing four seasons he matured into a handy key forward, and was a member of Carlton’s 1979 Premiership team in his 25th senior appearance for the Blues.

Brown began his career at Princes Park with Carlton’s Under-19 squad and made rapid progress. He was still just 17 when he was promoted to the senior team for the first time in June, 1976, when Carlton travelled to Victoria Park to play Collingwood and lost by 16 points. Stationed at full-forward that afternoon, Peter was overwhelmed by the Magpie defence and hardly sighted. He was omitted from the team the following week, and had to wait more than 12 months for his next senior opportunity, which came late in 1977 when he was recalled for three games - each time as a reserve.

It wasn’t until midway through his third year at Carlton that Brown blossomed into the player that the Blues had hoped he would. In round 11, 1978 at Princes Park, Carlton demolished St Kilda by an even 100 points, with Brown and his ex-Saint forward partner Rod Galt each kicking six goals. In Peter’s case it could have been more – he took 12 marks in Carlton’s forward half, and finished with 6 goals, 8 behinds in a performance that should have cemented his place in the team. However, by then a young Peter McConville was starring in the Blues’ Reserves, and when the finals rolled around, the high-flying youngster in guernsey number 33 was preferred as Carlton’s full-forward. Brown was relegated to the bench for the latter part of the home and away season, and overlooked for the Blues’ finals campaign.

In 1979, Brown had to wait until late July for a recall, and ran through the interchange gate to take some strong marks and kick three goals in Carlton’s big win over Melbourne. In similar circumstances a fortnight later, he booted another 4 majors against North Melbourne and kept himself in the selectors’ sights. Meanwhile, McConville had been trialed in defence with spectacular success, opening the way for Brown to reclaim the full-forward post in Carlton’s team for the Semi Final clash against North Melbourne at Waverley. Peter did well in his baptism of fire under finals pressure, kicking 3.4 from 12 possessions, as the Blues skittled the Shinboners by 38 points. Five days later he was named at full-forward when Carlton selected their team for an eagerly-anticipated Grand Final against Collingwood. 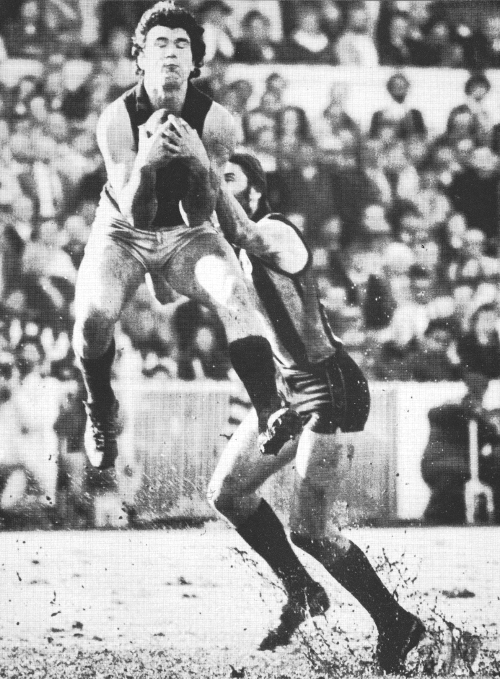 For days leading up to 1979 Premiership decider heavy rain fell across Melbourne, but that did not deter the fans. More than 113,000 packed into the MCG to witness an absorbing contest only decided in the last few minutes by a spectacular solo effort from Carlton dynamo Wayne Harmes. It wasn’t a day for marking forwards, and Brown had few possessions. Still, he played his role, kept leading for the ball carrier and finished the afternoon with a Premiership medal around his neck.

Under a new coach in Peter Jones in 1980, Brown started his fifth season at full-forward and averaged a goal a game in the first three rounds. Then, when the match committee asked him to play in defence, he responded by gaining 14 disposals and four marks against South Melbourne in round 4 – while also giving away eight free-kicks! By the middle of the season he had played 10 of the first 12 matches, but from then on he was a regular with the Reserves and by year’s end – after 35 games and 38 goals in the number 41 guernsey for the Blues – Brown asked the club for an open clearance. Brown had become disgruntled with the Blues by the middle of the season and had requested a clearance to Collingwood of all clubs! This was the club he supported as a kid but the Blues would have none of that. He was also on the verge of transferring to SANFL club Central Districts but that fell through as well. Brown had threatened to stand out from playing and sought legal advise on his desire to leave the Blues to gain greater opportunties of playing senior football at another club.

Carlton didn’t stand in his way, and during the off-season and allowed Peter to join St Kilda. The Saints used him primarily as a defender, and he managed another 20 games and four goals in two seasons. When he was delisted in 1983, Brown crossed to the VFA and joined Coburg where he played 15 games and booted 43 goals for the Lions. After one season with the Lions, he moved on to play with the competitions other big cats, the Werribee Tigers.