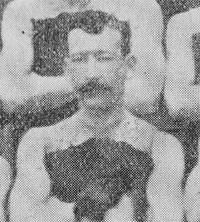 
Joe Sullivan was born in Collingwood, and played 54 games commencing in Season 1900.

He also kicked 63 goals, and won the top goalkicker spot at Carlton for 3 of his years in the Seniors. Indeed, Sullivan was one of our early stars. Sullivan was Captain of the Blues in 1902.

In 1904 Joe Sullivan was playing in Western Australia for Boulder City in the Goldfields League.
(Trove; Sun, Kalgoorlie September 11 p3)