"Carlton have all of last years' players available, with the one exception of McKenzie, who has volunteered. It is a case of no juniors need apply at Carlton, for vacancies are few, and trimmings must be cut down, the club being heavily in debt. They won the premiership alright, but at what a cost!
Shortell from Ballarat, a ruck and forward, is regarded at being able to gain a place in the team, which is bound to take a prominent part in this year's work, and be a hard side to beat."
(Australasian April 17 p26)
"In addition to McKenzie, who has joined the Expeditionary Force, the club will lose the services of Wells, J. McCarthy and W. Cook, who will remain in Bendigo.
The following were chosen as the players from whom the teams will be chosen during the season;
Dick, Haughton, Baud, Brown, Leehane, Gardiner, Sharp, Valentine, Hammond, Jamieson, Green, Fisher, Burleigh, Daykin, Lowe, Challis, Clancy, McDonald, McGregor, Triplett, Calwell, Keily, Andrews, Morris, O'Brien, O'Donnell, Barmingham, Muir and G. Shortell." (Age April 23 p11)

"They are optimistic at Carlton, and without curtailing players' allowances reckon on saving £1,000 and winning another premiership this year. Afternoon teas will be cut out, ditto unnecessary baths and the supply of bootlaces is to strictly limited. Every Wednesday night players and supporters are to treated to a picture show - if they pay!" (Sporting Judge April 24 p4)
1915 and the University Club dropped out of the VFL.
"Decision of the League to operate with 9 instead of 10 clubs this winter did not meet with entire concurrence of delegates. Carlton, Fitzroy, South Melbourne and Richmond all favored the inclusion of another team, so as to obviate the necessity of a bye each week."
(Sporting Judge April 17 p1)

With World War I raging, attendances at games halved and most clubs fell into debt. There was such pressure on the VFL that a July meeting of VFL delegates actually considered terminating the season, but the motion fell short of attracting the 75% majority it needed and hence the season continued. At one stage of the season there was even some contemplation by the league of amalgamating Australian Rules with Rugby League in a hybrid game. Luckily some strong opposition from Carlton and Richmond prevented this idea from eventuating.
St.Kilda changed its colours from the red, white, and black of Germany, to red, yellow, and black of Belgium. 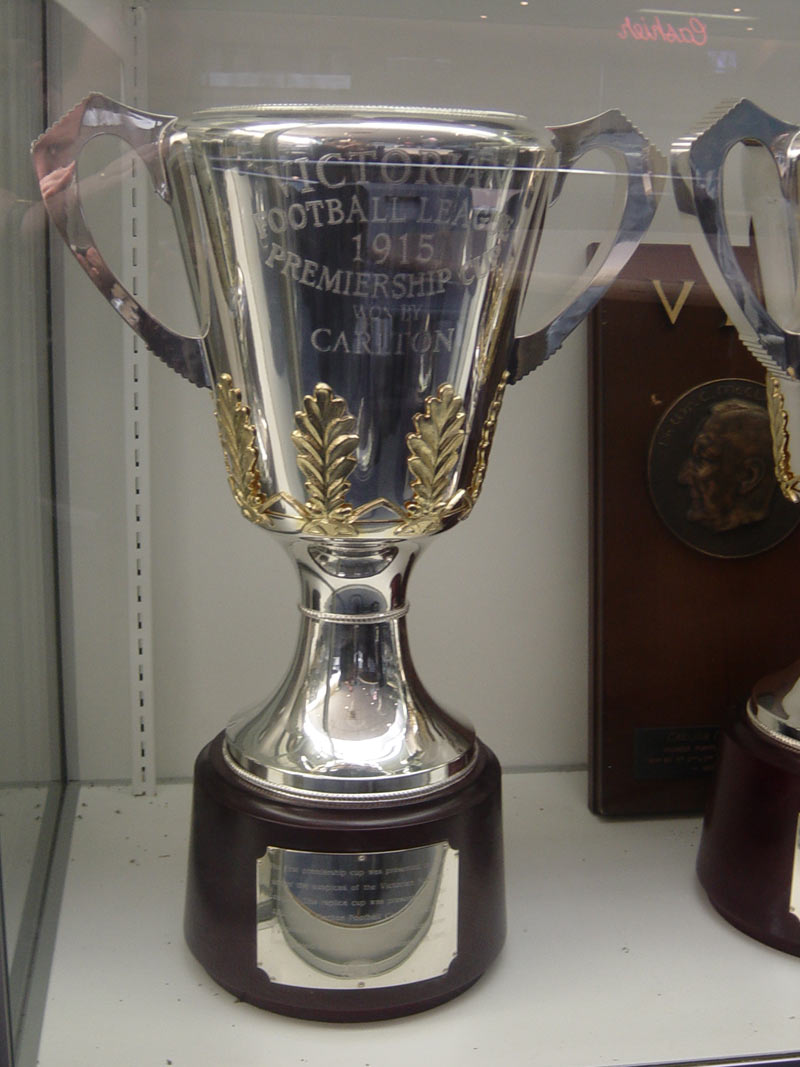 Carlton would win our second VFL Premiership in a row, and fifth overall, by defeating Collingwood by 33 points in the 1915 Grand Final. The scores were Carlton 11.12.78 to Collingwood 6.9.45.

Carlton would finish second at the end of the Home & Away season, just 2 points behind ladder leaders Collingwood due to a draw with Fitzroy in the opening round. Throughout the year, both Carlton and Collingwood would only have 2 losses - Carlton would lose to Fitzroy and Essendon, whilst Carlton would hand the Pies both of their defeats (although by only 1 and 2 points).

Even so, the Blues would have been confident going into the Finals, having lost only 2 games and drawn one for the whole season. In fact, going into the Grand Final, the Blues had won 9 games straight, and would make it a perfect 10 and take out the flag. Carlton had previously narrowly beaten Melbourne in the first Semi Final and comfortably accounted for Fitzroy in the Preliminary Final.

February 1916 and talk of disbanding the football competition is growing. Carlton at it's AGM came out strongly against the abandonment of the competition.
A full report of the AGM can be read via this link.
http://nla.gov.au/nla.news-article154554615

April 03
A Carlton team comprising of 17 players met a Yarraville side made up of 23 players.
Carlton won by 37 points
Carl; 8.4.52
Yville; 2.3.15
Goals; unknown
Only players mentioned were recruits Shortill from St.Pats Ballarat and Secomb from a junior club in Carlton.

vs Golden Point at the Eastern Oval Ballarat

Monday April 05,
A civic reception was given to the Carlton footballers at the Town Hall on Monday morning.
Carlton played a match against Golden Point to aid the Belgian Relief Fund.
£74 ($148) was raised.
Umpire: C. Clymo*
Carl; 2.1 4.5 - 8.12.60
G Pt; 1.3 1.5 - 1.8.14
Goals; unknown
Best; Dick, Challis, Gardiner, Bowes, Valentine.
.*Probably Charlie Clymo who coached Geelong for the 1931 season only, won the the premiership, and never coached again at the highest level.

April 10
A fair attendance.
Carlton played a number of juniors as the Blues' captain Billy Dick was being married and some Carlton players attended the ceremony.
Two of the juniors were George Muir a forward from Northcote Juniors, and Joe Shortill, a ruck man/forward from Ballarat.
Umpire; McKinnon
Carlton won;
Carl; 1.5 4.13 4.13 8.14.63
C.D; 0.2 0.2 2.3 3.6.24
Goals; unknown

April 22
The Age (p11) reports that the VFL Permit Committe has granted transfers for Justin McCarthy, Carlton to Footscray, A. C. Scadden, Carlton to Prahran, and W. Cook, Carlton to Bendigo City.

September 25
Carlton played the Army Camp team in aid of the Wounded Soldiers Fund on the M.C.G.
Crowd; 6,000, £230 was raised for wounded soldiers.
The weather was fine and a large section of the crowd barracked for the Army Camp team.
Alf Baud, George Challis, and Herb Burleigh played for the Army team which included many top footballers, but many were not fully "football" fit.
So the Blues went easy on their opponents allowing them to hold a handy 17 point lead at half time. Towards the end of the third quarter Carlton put the foot down and rammed on six goals in nine minutes to lead by 22 points at the last break. The final term was fairly even with the 1915 Premiers running out 22 point winners.
Carlton team;
Backs; Rigaldi, Jamieson, McDonald
Half backs; Leehane, Dick, Brown
Centres; Robinson, McGregor (Capt.), Keily
Half forwards; Valentine, Fisher, Shortill
Forwards; Hammond, Gardiner, Howie
Followers; O'Brien, Daykin
Rover; Sharp
Umpire; Field, Elder; boundary, Patterson, Campton.
Carlton won;
Carlton 3.5 4.5 12.8 13.11.89
A.Camp 3.1 7.4 9.4 10.9.69
Goals; Gardiner 3, O'Brien 3, Valentine 2, Hammond, Rigaldi/Howie*, Keily, Fisher, Sharp
.*Another source says Howie scored the goal.
Best; O'Brien, Jamieson, Valentine, McGregor, Robinson, Daykin, Sharp. 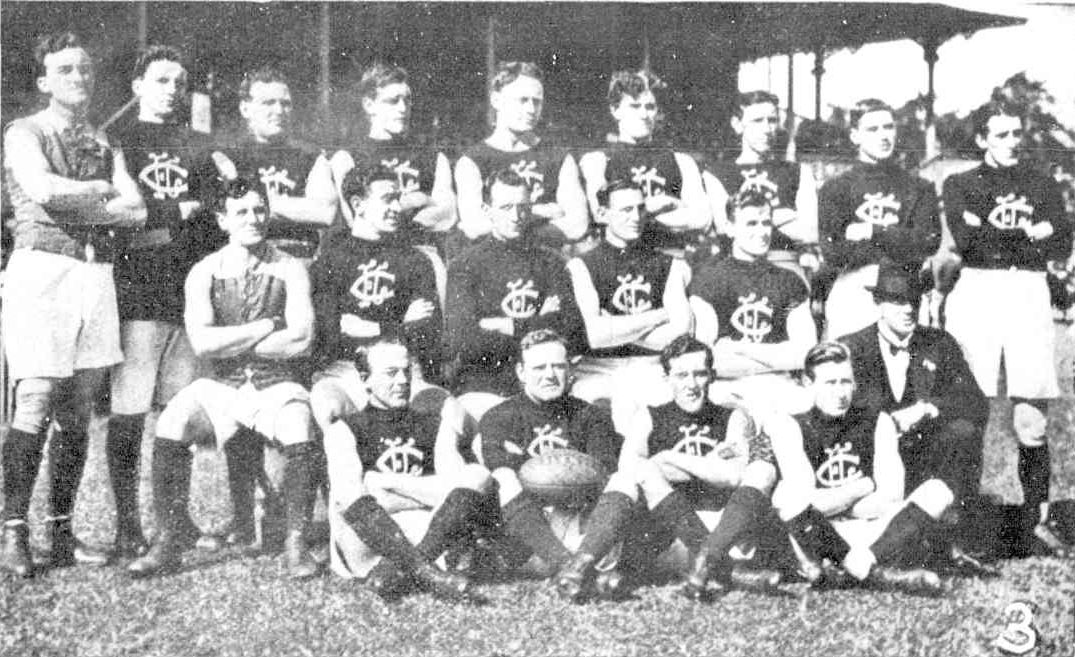 Carlton historian Tony De Bolfo in 2016 wrote about this game and the fact that the National Film and Sound Archives had recently unearthed film of the match.
To read click here> http://www.carltonfc.com.au/news/2015-11-04/archive-avails-rare-match-footage

World war.
Speaking at the Carlton AGM in February, the president of the V.F.L. Mr. Alex McCracken said, "he did not advocate the suspension of matches, as it would create unnecessary gloom, but he advised players not to let themselves be wrapped up in the sport at the expense of higher things."