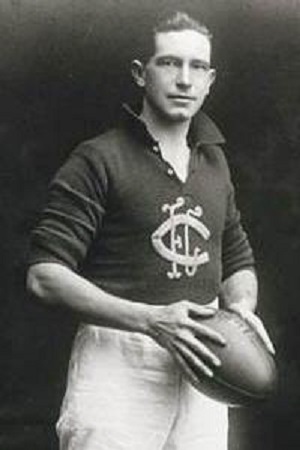 Best remembered for his near-decade as President of the Carlton Football Club during the 1930’s, David Henry Crone joined the Blues after playing three games for Fitzroy, and being rejected (on medical grounds) for military service in World War 1. He was determined to serve his country however, and repeatedly re-applied. After racking up 18 matches for Carlton in 1917-18, his persistence won through at last when he was accepted into the Australian Army in the last months of the war, only for hostilities to end on the eve of his departure for front-line duty.

A farmer’s son from Donald in northern Victoria, Dave’s childhood and early adult years revolved around horses and football. By 1914, as Great Britain and her Dominions prepared for war with Germany, Crone was a star follower for South Ballarat, and a keen, part-time member of the 19th Light Horse Regiment; a Militia (Army Reserve) formation.

When Australia was plunged into war in August 1914, Crone wasted no time in turning up to a recruiting centre. At 19 years of age, and already with valuable military training experience, he seemed to be the perfect recruit – until he underwent the compulsory medical. The doctors found that Dave had overlapping toes, and to his disbelief, he was rejected as physically unsuitable.

All his protests fell on deaf ears, and though he vowed to keep going back to reapply, VFL football became the focus of his attention instead when he agreed to play with Fitzroy. He made his senior debut for the Maroons in 1915, but couldn’t settle at Brunswick St and returned to the family farm late in the year.

By 1917 the VFL comprised just six teams, and every one of them found it difficult to field a competitive side each week. In the early summer of that year, Crone was approached by Carlton, and agreed have another crack at top level football with the Blues.

He made his debut in Navy Blue against Richmond at Princes Park in June, 1917, and celebrated a 44-point drubbing of the Tigers in champion centreman Rod McGregor’s 200th game. Dave wore guernsey number 30, playing as a follower in support of ruckman Harry Haughton and rover Viv Valentine. In all, he managed six games and two goals during that season, but wasn’t included in the Semi-Final side that lost to Fitzroy by 9 points.

In 1918, he strung together another 12 matches, while the tide of the war in Europe inexorably swung the Allies’ way. Casualties on both sides had been horrific, and when a referendum to introduce conscription failed, the authorities were forced to lower the standards for new recruits. At last, in July, Crone’s application for active service was approved.

Within a month of starting regular army training, Dave’s abilities were recognised by promotion to Corporal, then again to Sergeant in September. He was in the last days of his preparations when the Armistice was signed on November 11, 1918, and the 'War to end all Wars' was finally over.

Having not left Australia, Dave was offered an immediate discharge, but instead opted to volunteer for a tour of duty with the Australian Naval and Military Expeditionary Force, whose task it was to secure all former German territories and installations in New Guinea and the Solomon Islands.

He spent a year in the tropics, and returned home to resume with the Blues at Princes Park in 1920. Still just 25 years old, he wore guernsey number 15 in four more matches, and ended his career playing at half-forward alongside Horrie Clover when Carlton beat Geelong by 9 points at Corio Oval on June 12, 1920.

Nine years later, David Crone was elected President of the Carlton Football Club. Throughout his nine seasons at the helm, the Blues were a VFL power and perennial finalists, yet often fell at the second-last hurdle. Our best result under his leadership came in 1932, when Carlton were narrowly in front of Richmond with only minutes left in the Grand Final, only to falter and lose by 9 points.

Later in life, D.H.Crone was employed as produce manager for Goldsborough Mort & Co. Ltd. Still a keen patron of horse racing, and an admirer of fine automobiles, he passed away at the age of 66 on November 2, 1959.

The Ararat Advertiser April 17 1915;
Mr. "Dave" Crone who commenced his senior career in senior football at Willaura a few seasons ago, and who has since gained considerable experience in the Ararat, Ballarat, and Donald teams will be playing with Fitzroy in the approaching season. Fitzroy on Saturday last engaged in a match against the Fitzroy Juniors, and in referring to the players, the "Argus" states that the most promising recruit in the team was D. Crone.

1932 August 26 Friday
Dave Crone took part in a veterans match on the MCG to raise funds for the Children's Hospital. 12,000 people attended and raised £450. The two sides were captained by former Richmond captain G. Sparrow and former Carlton captain Jack Baker. Dave Crone was named among the better players.

Amplifying his scheme for the establishment of a Victorian Football League scholarship, the president of the Carlton Football Club (Mr. D. Crone) stated today that if the League approved the award would be open to a boy of any religon.
Yesterday Mr. Crone discussed the idea with the Director of Education (Mr. J. McRae), who was greatly impressed.
"I would suggest that the League would set aside the annual sum of £100 to £150 for the scholarship," said Mr. Crone. "The winner would have two or three years finishing education at one of the public schools. The award would be a sort of miniature Rhodes scholarship, and the holder, in addition to having sporting ability, would have to possess character and scholastic abilty."
(Riverine Herald November 27 1933 p3)

"With a keen eye to the social side of football in particular, Mr. Dave Crone, the energetic president of the Carlton club is a wonderful worker for the club and the game generally. The practice of officials of one club going to the dressing rooms of opposing clubs after the matches and congratulating or commiserating with them as the case may be is frowned on in some quarters, but Dave does the job in such a sporting way that he is always welcomed.
A vice president of the League, a life member, and a former selector, Dave is one of the leading delegates. He is an able speaker, his oratory being the envy of lessor favoured delegates.
To-day will be a memorable day for Mr. and Mrs. Crone for it is the 15th anniversary of their wedding. Mrs Crone is keenly interested in the game, and rarely misses a match. Both will regard a victory against Collingwood as a fitting rememberance of the great event."
(The Argus June 06 1936 p19)

"Mr. Dave Crone, president of the Carlton Football Club, vice president and life member of the Victorian Football League, announced his retirement from football yesterday.
Mr. Crone who has been associated with League football for 27 years, said that his decision had been influenced by pressure of business and the fact that he considered that the time had come when he should make way for someone else. He has already advised the committee of the Carlton club of his decision. He will address the players at their last meeting for the season at the ground this afternoon.
This season is Mr. Crone's tenth in the office of president at Carlton and his thirteenth as an official of the club. He has been it's delegate to the VFL since 1925, and has been a vice president for three years. He was treasurer of the League for two years. Mr. Crone also played football for Carlton, and was the players' representative on the Carlton committee."
(The Argus, 02 September 1937)

The Carlton football Club president, Mr. D. Crone wrote to us on Tuesday, September 7;
I read with great interest and with pleasure the letter from one of your subscribers in to-day's paper under the name of Mr. Lomasney.
I would like you to believe that the years I have given to the great game of football have been beautiful to me, and that the reward I have gained is the friendship and support of the dear people of Carlton. I want you to understand, sir, that I do not seek any renumeration or praise for my work. I would rather go quietly out of the game, knowing this in my heart, that football has done more for me than I have for football.
I have forwarded the following letter to your subscriber:-
"Sir, - I have read with great interest your letter in 'The Age' relative to my years of service at Carlton, and I thank you for the sentiments expressed, but would ask you not to pursue any form of send-off or function to myself. If there is any money to be gathered for any cause at all, please let it be given to those who are suffering and are afflicted by this cursed infantile paralysis. As you are possibly aware, our daughter was stricken by this some nine years ago."

"I feel from the bottom of my heart a love for the people of Carlton, and do not desire one thing to be done for me, because the greatest reward that I have had during the years of association with the club that I love has been the friendships of the people in Carlton. So, I ask you in a very humble and very sincere sense not to move in the matter of any send-off for me, but to give to those who suffer what you may possibly extend to me."

(Mr. M. Lomasney called at "The Age" Office on Wednesday and stated that he did not write the letter attributed to him and published in these columns on Tuesday.)
(The Age September 10 1937 p8)