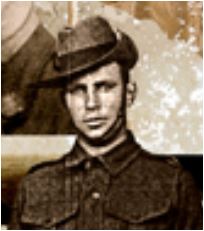 Fenley John ‘Fen’ McDonald became the third member of his family to play VFL football when he pulled on Carlton’s famous navy blue strip, and ran out onto the hallowed turf of Princes Park for a home match against St Kilda on July 29, 1911. Six years earlier, Fen’s two older brothers; Edwin and Archie, had both played their one and only game for Essendon against Fitzroy at the East Melbourne Cricket Ground.

In a memorable start for the athletic defender from Nagambie, Carlton hammered the Saints that day to the tune of 114 points. St Kilda’s cause wasn’t helped by the fact that several of their players were on strike over match payments. Blues’ full-forward Vin Gardiner ran riot in the goal square, booting ten goals - the first time that this feat had been achieved by a Carlton player. And it could have been even more – he also kicked 12 behinds!

The youngest of seven children (four boys and three girls) Fen McDonald was a strongly-built young man who benefited from growing up in a rural environment of regular physical labour and tough weekend football matches. He was sent to Business College in Melbourne in 1910 by his family, and was discovered by the Blues while playing impressive football for the Carlton District team in the Metropolitan Amateur Football Association.

In 1912, when individual player numbers became a feature of all VFL matches, McDonald was allocated Carlton guernsey 14. He wore it in nine games – playing mainly at half-back, or in a back pocket – although he did manage to push forward on the odd occasion to kick four goals.

In 1913, McDonald elected to switch clubs and crossed to Melbourne. But opportunities proved to be no more numerous with the Fuchsias, and he was selected for just one senior appearance. By early 1914, as Fen began the last year of his studies and returned to play with Carlton Districts, Europe was on the slippery slope toward yet another armed conflict. It came in September, when German troops poured across the Belgian border. France, Great Britain and her Dominions immediately rallied to the Belgians’ aid, and the First World War began.

Responding to calls from the government and the churches, Australians young and not-so-young thronged the recruiting centres, and by early 1915, the first battalions of Australian and New Zealand troops embarked for overseas service. Their destination was Egypt, and afterward, a then little-known stretch of Turkish coastline near the village of Gallipoli.

At dawn on April 25, 1915, Fen McDonald and the rest of the 7th Battalion of the Australian Imperial Force was rowed ashore at Gallipoli, under heavy fire from well-prepared defences. Incidentally, the commanding officer of the 7th Battalion, Lieutenant Colonel H. E. "Pompey" Elliott was nicknamed 'Pompey' after the great Carlton footballer Fred 'Pompey' Elliott. Somewhere on that fatal shore - perhaps on the water’s edge, or on the sparse, bullet-swept slope behind the beach, Fen paid the ultimate price for his bravery.

One of 4200 Australians who fell in our nation’s baptism of fire, he has no known grave. But he will forever be among the most revered of Australia’s casualties of war, with his name carved into the ANZAC memorial at Lone Pine.

Many years later, McDonald became one of the two names used by Carlton and St Kilda to commemorate their own ANZAC day game, in Wellington, NZ, a game the Blues won.

Articles: The Blues at War | History of the 7th Battalion AIF