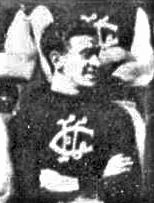 
Frank Rigaldi who was born in Melbourne East, played a single game for Carlton, taking the field in Season 1916. He was recruited from Carlton District after earlier playing for Williamstown VFA.

Rigaldi played two games for Richmond in 1918 wearing No.31, he kicked a solitary goal for the Tigers.

Frank appears in a image of the Carlton team that played an Army Camp Team a week after the Grand Final on September 25 1915.
The match was organized to raise funds for wounded soldiers. The loser of the Grand Final (Collingwood) was to provide jumpers and trainers for the Army team.
If someone can identify Frank from this image, it would be appreciated.
He was named in the back pocket and scored a goal in Carlton's 20 point victory. He would have most likely been a ruckman or follower as the second ruck man was generally rested in the back pocket.
See Rigaldi's Blueseum Image Gallery at the bottom of this page.
Also see the 1915 page and scroll to the bottom to see the Carlton team with possible names, including Frank's.

This image of Frank was found through a process of elimination of players in the 1915 Carlton v Army Camp team photo. If anyone disagrees please contact Blueseum.