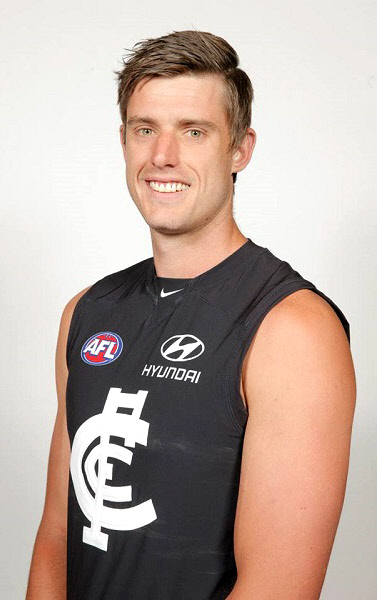 In one of the biggest surprises of the 2013 AFL Rookie Draft, Carlton selected 27 year-old former Brisbane and Collingwood ruckman Cameron Wood in the second round at number 28 overall. Having been discarded by Collingwood in 2012, Wood had played consistently well throughout 2013 in the VFL with Williamstown, but few expected him to be given a third opportunity at elite level.

However, the departure of Shaun Hampson to Richmond had forced the Blues to re-assess their stock of big men, so Wood was picked up as insurance against long-term injury to Matthew Kreuzer or Robert Warnock. Although another ex-Collingwood ruckman in the vastly-experienced Premiership player Darren Jolly was also available in the draft, Carlton’s recruiting team opted for the younger man, largely because Wood had already established a strong rapport with Blues coach Mick Malthouse during their five seasons together in black and white.

Way back in 2004, Wood had been working his way up through the ranks at West Adelaide when he was drafted for the first time. The Brisbane Lions called his name at number 18 in the National Draft, and Cameron packed his bags for the sub-tropics. He played his first senior game in maroon and blue early in 2005, but from then on his opportunities were limited. Despite gaining a Rising Star nomination in round 2, 2007, he managed only 16 matches in three seasons, and was then traded to Collingwood.

Wood represented the Magpies in 48 games between 2008 and 2012, without ever shaking the tag of back-up ruckman. His entire career in black and white was spent in the shadows of Josh Fraser, Darren Jolly, Leigh Brown and Chris Dawes, before his AFL career seemed to have ended when he was delisted in October 2012. Prior to the next season, he crossed to Williamstown, where his energy and experience lifted the Seagulls into a Preliminary Final and prompted Carlton to come calling with their bombshell offer.

On arrival at Princes Park, Wood credited his previous good relationship with Malthouse and high performance manager David Buttifant as the key to his recruitment. He knew that the challenges facing him at Carlton were considerable, but was intent on not wasting his opportunity. "I'm under no illusions that I've been recruited as insurance,” he said. “But if I didn't think I could play the number one ruck role, I wouldn't waste people's time, and be here just for the sake of being here."

The opportunity to make those claims a reality took a long time to materialise – some nine months in fact – before Carlton’s match committee lost patience with Robbie Warnock and replaced him with Wood for the match against top-four contenders North Melbourne on a Friday night at Docklands in round 18. Cameron seized his opportunity with both hands, and played a significant role in the Blues’ upset win. Matching North’s in-form ruckman Todd Goldstein, Wood won 26 hit-outs, took seven marks and kicked his first goal in navy blue as Carlton beat the Shinboners to chalk-up just their sixth win for the year. From then on, Cameron led Carlton’s ruck in all of the remaining six matches, and at season’s end was rewarded with a 2-year contract extension.

Season 2015 will forever be remembered as a train wreck for the Carlton Football Club, and one of the lowest points in the proud history of the Navy Blues. But it was also the year that Cameron Wood emerged from the shadows, to claim his place as a legitimate AFL front-line ruckman. On the opening night of the season, Richmond handed the Blues a five-goal thumping at the MCG, and after that, things just got steadily worse. By late May Carlton had won just one game and was heading into crisis when Malthouse was sacked. A fortnight later champion former captain Chris Judd suffered a career-ending knee injury, and from there, the Blues staggered through the rest of the year to finish last.

Midst the chaos, Wood was one Blue who didn’t toss in the towel. In 18 games, he was tireless in his efforts to lift his flagging team, and the Carlton masses took him to their hearts. He wasn’t a regular match-winner, or indeed the most accomplished ruckman to have played the game, but he was honest, committed and gave his all every time he ran out in his navy blue number 36 jumper. And you can’t ask for much more than that.

The Blues turned over their list during the 2015-16 off-season, appointing a new senior coach in Brendon Bolton, and recruiting a dozen new faces to the club, including ruckmen Andrew Phillips and Daniel Gorringe. This pair, along with a rejuvenated Matthew Kreuzer, were preferred as the Blues frontline big men throughout 2016, leaving Wood languishing in the VFL with the Northern Blues for the entire season.

On August 30, 2016 – only a few days after the last home and away match of the year, Wood announced his retirement. Aged 29, he could reflect fondly on an honest AFL career spanning 11 seasons and 88 senior games.