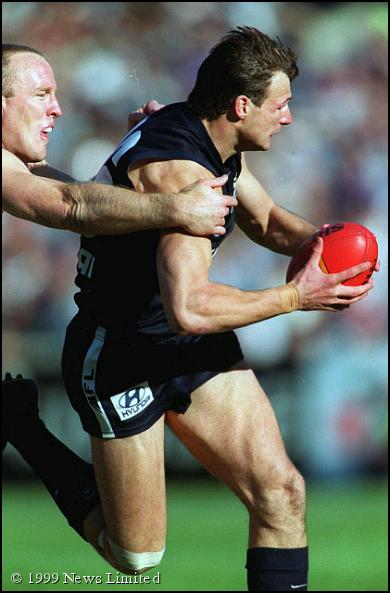 Even now, many years after he played his last game for Carlton at the age of 23, the dismay and anger at Aaron Hamill’s defection to St Kilda in 2001 still lingers at Princes Park. Whatever the real cause of his departure – variously reported as either a clash with club President John Elliott, the lure of a huge contract at St Kilda, or a combination of both – Blues’ supporters of that time still feel let down by Hamill’s decision. Especially in light of the effort the club put into his early development, the measures taken to enable him to play in the 1999 Grand Final, and his claim of being a staunch Blues supporter from his school days!

Growing up in Canberra, Hamill was a late bloomer who had been an outstanding junior basketball and rugby player, before he was taken under the wing of former St Kilda Premiership player Kevin ‘Cowboy’ Neale at Tuggeranong. Carlton recruited the strongly-built youngster with pick 79 in the 1994 National Draft, and nurtured him for the best part of two seasons before he was given an opportunity a senior level – playing in defence initially, and taking part in his first final series that same year.

When Carlton’s key forwards in the 1995 Premiership team, Stephen Kernahan and Earl Spalding, retired two seasons later, the club found their successors in Lance Whitnall and Aaron Hamill. Much like Spalding, Hamill evolved into a hard-hitting, pack-busting team player who ran and tackled hard to lock the ball into the forward half, while still being capable of big pack marks and long, generally accurate kicks for goal. He and Whitnall both showed glimpses of what was to come when the Blues demolished Geelong to win the 1997 Pre-Season Premiership, and Carlton supporters hailed them both.

By 1999 Hamill was firmly established at Carlton, and enhanced his reputation with a dominant display in our big Semi Final win over West Coast. A week later, the underdog Blues enjoyed one of our all-time great victories when we knocked over hot favourites Essendon in a cracker ’99 Preliminary Final – but at a cost. Hamill was reported for unduly rough play for using a knee against Essendon’s Dean Wallis, and outed for two matches by the AFL tribunal.

However, because he was such a vital part of Carlton’s game plan for the Grand Final clash with North Melbourne, the Blues appealed against Hamill’s suspension, and went to extraordinary lengths to argue the case. An expert in bio-mechanics was taken to the appeal hearing, along with the best advocate the club could find – and it worked. The suspension was quashed, Hamill thanked the club 'for coming up with such a good story,’ and took his place in the Grand Final team. Sadly, it was all to no avail, and the Roos won the flag by 35 points.

A year later, after Hamill switched from guernsey number 36 to the iconic number 4 previously worn by ‘Sticks’ Kernahan, Carlton seemed back on track for a coveted 17th flag when we smashed Brisbane by a whopping 82 points in a Semi Final at the MCG. Hamill was unstoppable that afternoon, tearing holes in the Lions defence at will, and booting seven goals, while a young Brendan Fevola came off the interchange bench to slot four. But a serious hamstring tear suffered by Carlton’s champion full-back Stephen Silvagni damped down any celebrations, and Essendon went on to win the flag after tipping the weakened Blues out of contention in the Preliminary Final.

Although it wasn’t known for some weeks, that game brought the curtain down on Hamill’s career at Carlton. Amid whispers of a massive offer put to him by the Saints, Aaron alleged that Carlton President John Elliott insulted him at a post-season function, and so requested a release to St Kilda. The stunned Blues tried to mediate a compromise, but Hamill would not be swayed. He threatened to nominate for the pre-season draft if he wasn’t cleared by Carlton, and for a while things got quite messy.

Eventually, faced with the proposition of losing one of the stars of the game and getting nothing in return, Carlton agreed to a trade Hamill to St Kilda in return for pick 4 in the 2000 National Draft (used to select Luke Livingston) as well as fringe player Sam Cranage. The proceeds from that deal were disappointing for Carlton (between them, Livingstone and Cranage managed only 56 senior games) but if the contract offered to Hamill by the Saints was even close to what was claimed, St Kilda didn’t get their money’s worth, either.

Although he went on to play 98 times for the Saints, and captained the club under their quirky rotational system in 2003, Hamill’s best football was behind him by 2004. He missed all of 2007 through injury, and St Kilda’s best finish to a season while he was on their list was third in 2004.

His career ended in 2007, and Hamill thanked both Clubs for the opportunity in a gracious ending.

Whether that helped soothe the pain or not, we won't know, but it sure didn't hurt. Many years later Hamill came back to the Club as an Assistant Coach!