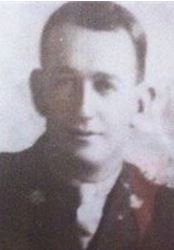 
Just three years after playing his second and last game of VFL football, former Blue Jack Loughnan demonstrated extraordinary courage and leadership under fire as a company commander in World War 1. He was decorated for bravery, before being seriously wounded in action during the most horrendous episode in Australia’s military history. After surviving the ‘War to end all Wars,’ Jack volunteered again when Australia had to fight the same enemy 25 years later.

Loughnan was born in Charlton, in northern Victoria, in 1889. He was educated at Melbourne’s prestigious Xavier College, where he developed a love of Australia’s unique code of football, and spent his holidays at his family’s country property in the Riverina where he played for the Hay FC. By 1912 he was working as a public servant in Melbourne when he found his way to the Carlton Football Club. Blues coach Norman Clark obviously saw promise in the heavyset six-footer, and called Loughnan into the Blues’ ruck for the round 9 match against University.

The Professors weren’t expected to put up much resistance to the powerful Carlton squad on that Saturday afternoon at the MCG, but they stuck to their task manfully until they were eventually vanquished by 19 points. Then, in the days following, Loughnan apparently had second thoughts about top-level football - because before another week was out, he and the Blues had parted company. A year later, Jack made a brief comeback for Fitzroy, playing against Essendon in round 5, 1913 at the Brunswick Street Oval. The Maroons won convincingly, and Loughnan finished his modest senior football career undefeated.

On August 4, 1914, Loughnan celebrated his twenty-fifth birthday. That same day, in Canberra, Australian Prime Minister Joseph Cook announced to the nation that Australia had followed the mother country by declaring war on Germany. The first great conflict of the twentieth century had begun.

Like thousands of other young Australian men - particularly those from rural areas – Loughnan had spent a lot of his spare time since his teenage years training with the Australian Militia, or Army Reserve. So when he volunteered for active service in 1915, he was already well-versed in military doctrine, weapons and tactics. He was appointed a Lieutenant with the 6th Infantry Battalion, and embarked for France in September of that same year.

By early 1916, Jack had been transferred to the newly-formed 58th Infantry Battalion, promoted to the rank of Captain, and given charge of a Company of 200 men. In July, the 58th took part in its first major offensive at Fromelles, and like every other British and Australian formation in that ill-fated battle, was virtually cut to pieces by well-prepared German artillery and machine gun fire. The Australian 5th Division alone suffered 5,533 casualties in two horrific days of fighting – the worst losses in Australian military history.

Before one determined Australian attack was repulsed however, Jack Loughnan earned a Military Cross by inspiring his men with sustained bravery under fire. The citation that accompanied his medal stated:

This Military Cross is awarded to Captain John Loughnan, for conspicuous gallantry and leadership. He cleared a village of the enemy, capturing 150 prisoners and two 8-inch howitzers – with their tractors – by the swiftness of his advance. Later, he led his men with great dash and determination in another attack, and captured 15 machine guns. He skilfully covered the flank of another battalion which had lost direction, and reached and consolidated his position.

Only hours after those heroics, Loughnan was himself a casualty - cut down by a burst from a German machine-gun, and badly wounded in the lower back and legs. He was rushed to a field hospital, before being transferred back to England for specialist treatment. After a long convalescence, Jack eventually returned to duty behind the lines as a small arms instructor in the weeks before the Armistice in November, 1918. Amidst the victory celebrations, Loughnan suffered a broken leg in a training exercise, and that extra setback delayed his return to Australia until March, 1920.

For a decade or so after arriving home, Jack supervised the family farm at Charlton, while continuing to recuperate from his physical and emotional wounds. In 1936 he moved back to Melbourne with his family, and when World War II erupted in 1939 he immediately volunteered his services again. Although he was almost 50 years old by then, the authorities recognised the value of Jack’s experience and knowledge. He was reinstated to his former rank of Captain, and spent a year at an Engineer Training Depot before his health deteriorated and he was honourably discharged.

Jack Loughnan died on November 19, 1949, aged sixty – one of Carlton and Australia’s heroes, and a brave man whose life was surely cut short by his wartime experiences.