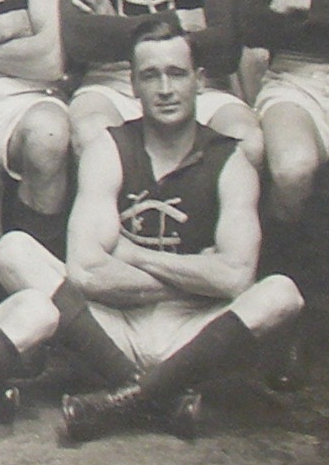 The youngest of three brothers from South Bendigo who all played VFL football, Percy ‘Dub’ Daykin was a two-time Premiership star for the Old Dark Navy Blues during the dark days of World War 1. From the day he made his debut in round 1, 1914 until his retirement, Daykin was only ever left out of Carlton’s senior team when he was ill or injured. A noted big-match performer, he played finals football in every one of his eight seasons with the Blues, including no less than four Grand Finals.

Percy’s eldest brother was Richard, whose 21 games at Collingwood included a follower’s role in the Magpies’ 1910 Premiership. Next in line was Bert, who played 32 games for Essendon between 1908 and 1910. Percy chose Carlton when it came time for him to test his ability at the highest level, and he proved to be the most accomplished of the Daykin boys by a wide margin.

‘Dub’ played in a variety of positions during his first few seasons at Princes Park, but proved most effective as a creative on-baller, in tandem with Harry Haughton and Viv Valentine. He was a member of Carlton’s 1914 Premiership team in only his 20th game, and just about best on ground when the Blues claimed another flag in 1915.

In the latter half of his career, Daykin became a specialist forward pocket or half forward flanker. He had the uncanny knack of always finding space, and was a major beneficiary of the pin-point passing skills of Carlton’s champion centreman Rod McGregor. Between 1918 and 1921, he kicked 93 goals in 65 matches.

‘Dub’ Daykin retired at the age of 31, after contesting his fourth Grand Final against Richmond in 1921. On a cold, windy afternoon at the MCG, the Blues and Tigers slugged it out from start to finish, with Richmond hanging on grimly in the last few minutes to win by 4 points.

"It was way back in 1914, when Fitzroy and Carlton fought a sterling semi-final. In a titanic scrimmage, Jim Toohey, of Fitzroy, had his knee badly hurt, and it was a pitiful sight to see him hobbling about in great pain. Daykin, who always wore a bandage on his own "footballer's knee," and had been limping throughout the game, unhesitatingly pulled off his knee bandage and gave it to his injured oppenent. The tumultuous applause from the great crowd was a fitting tribute to one of the many chivalrous actions witnessed during the sterling career of gallant "Dub" Daykin."
(Trove; Sunrayasia Daily August 07 1925 p6)