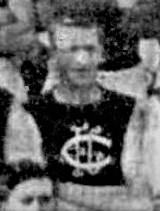 George Calwell debuted Round 2, 1914 there is an poor quality un-named team photo from that game on that page, but which player is George?
You now will find on the Rnd 2 page that we have endeavoured to name all the players.

Image: We believe this is a photo of George, if any one can positively identify him or the player we have named as Calwell, please contact Blueseum.

George Calwell was the older brother of Clarrie Calwell, and his short VFL career of just 24 matches for Carlton included two Grand Finals played in the shadow of World War 1 - a stirring Premiership victory in 1914, and a shock defeat in 1916. Yet only weeks after playing in the 1916 decider, George was discharged from the Australian Army as medically unfit!

Melbourne in the first decades of the 20th century had numerous ‘workplace’ football teams that competed in mid-week, as well as weekend competitions. Myers, Tramways and Railway Workshops all had sides, as did Clifton’s Rope Works. Clifton’s star player was a fair-haired terrier named George Calwell, whose dominance around the packs brought him an invitation to play at Princes Park in 1914.

George who was born in North Carlton, made his senior debut for the Blues against St Kilda in May of that year, on a half-forward flank beside another notable first-gamer; Charlie Fisher. The Saints won by 13 points in an upset, but Carlton went on to finish the season on top of the ladder. Unfortunately, the satisfaction of that achievement was overshadowed by the outbreak of war in Europe barely one month earlier.

While volunteers thronged recruitment centres across Australia, the Blues readily accounted for Fitzroy in the first week of the 1914 finals. We would have claimed the flag early, too, if we had beaten South Melbourne in the Preliminary Final. The Bloods however, proved too good in that clash, their pace and slick team-work toppling the Blues by 19 points. Yet all was not lost for the boys from Princes Park. As minor premiers, Carlton were entitled to challenge South to a winner-take-all Grand Final rematch, and wasted no time in doing just that.

George Calwell had played ten matches in his debut season, only to be left out of the first two finals. When Carlton went looking for some extra pace around the packs for the Grand Final, Frank Triplett and Stan McKenzie were dropped from the previous week’s team, and replaced by Alf Baud and Calwell. Baud went to a wing, and Calwell into the first ruck in support of Charlie Hammond and Jimmy Morris.

With no less than nine first-year players in our lineup, Carlton beat South Melbourne by just six points for the 1914 Premiership, in a high-quality match remembered for the last-minute heroics of Blues’ full-back Ernie Jamieson. With less than 60 seconds remaining, a long kick to the South Melbourne goal-front seemed certain to be marked by their key forward Tom Bollard, until Jamieson came from nowhere to fling himself at the ball in a desperate, effective spoil. The ball was rushed out of bounds, and the flag was Carlton’s.

After wearing guersey number 26 in his debut season, Calwell changed to 19 in 1915. He was solid early, before recurring foot problems restricted his progress and he managed just twelve matches for the season. He returned to the team on the eve of the finals, but broke down again and missed out on Carlton’s back to back Premiership triumph over Collingwood.

Despite continued concerns about the condition of his feet, George enlisted for active service in November 1915. He was passed fit, and assigned to the Corps of Engineers for specialist training at Langwarrin in April, 1916. At the same time he was retained on Carlton’s list, to be considered when available.

Season 1916 – when the fighting in the trenches in France was at its bloodiest, and wartime deprivation restricted the VFL competition to only four teams – saw Carlton qualify for our third Grand Final in a row, this time against Fitzroy. A loss of talent and experience hit both teams hard in the week prior to the decider. Carlton couldn’t consider champion centreman Rod McGregor because of illness, while Ernie Jamieson and Athol Sharp were both ruled out by injury.

As inclusions, the Blues surprised by recalling Calwell and Jimmy Morris to play their first and only games of the year. Morris went into the centre to cover for McGregor, while Calwell (now wearing number 17) was named in a forward pocket. Fitzroy had actually finished last of the four teams in 1916, but hit top form at the right time, and defeated a bitterly disappointing Carlton by five goals on Grand Final day. Thus the Maroons became the first (and surely the only) team in VFL history to be awarded the wooden spoon, and the Premiership pennant, in the same season.

If George thought that shock loss was his low point for the year, he was sadly mistaken. In October, he was subjected to another searching medical examination by army doctors, who this time discovered that he was suffering from hallux valgus – a degenerative condition in the joints of the toes, similar to osteo-arthritis. It was bad, they said, and would only get worse.

As a consequence, George Calwell’s football career with Carlton (and his army service) ended at the age of 25 in November 1916, when he was honourably discharged as medically unfit.

We are not sure if this is the same George Calwell.

In 1913 then police constable Calwell was dismissed from the police after attempting to shoot a fellow officer (with a pistol he picked up from an assassination attempt) at the Russell Street barracks.
https://trove.nla.gov.au/newspaper/article/245408540
George Calwell was a police constable who was on point duty at the corner of Lonsdale and Swanston streets on Thursday morning 29 January 1920. He was knocked down by a car and taken to the Melbourne Hospital with a bruised leg.
In 1923 Calwell was sentenced to nine months in prison for assault.
https://trove.nla.gov.au/newspaper/article/165098508