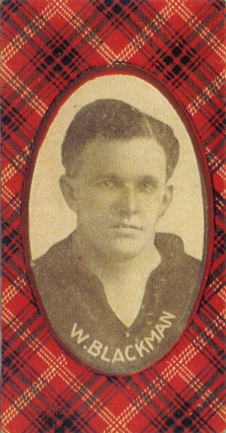 Billy Blackman played 54 games for Carlton in a five-year career between 1920 and 1924. He was a tough, courageous, no-nonsense type of centreman who boored in after the football with single-minded determination - which is exactly the sort of approach you would expect from a young man who had been wounded three times while fighting for his country in World War 1.

Recruited by from neighbouring amateur side Brunswick Juniors, Blackman was a real contributor in each of the four finals matches he played for the Navy Blues. He was on the winning side on the first occasion - the 1921 major Semi Final against Collingwood - but the other three all ended in desperately close losses by an average of less than six points.

Billy was born William Alfred Blackman in Brunswick in 1895. He left school early, and was working as a labourer when Great Britain and her empire declared war on Germany in August, 1914. Billy was too young to sign on immediately, and so had to wait almost a year until he was allocated to a draft of reinforcements for the 5th Battalion. A few days after Christmas 1915, he filed on to a troopship at Princes Pier, on the way to the horrors of trench warfare in northern France. 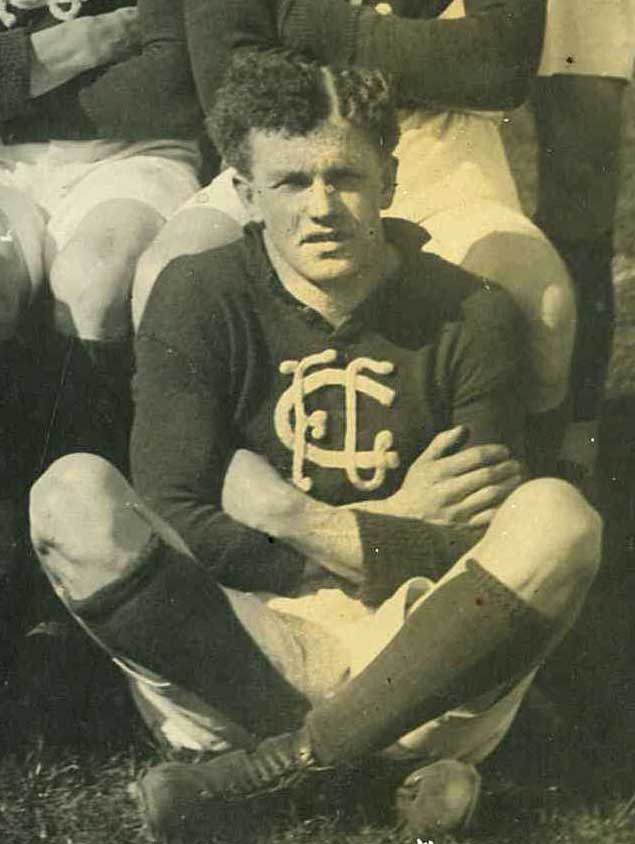 In September 1916, Blackman was in the front line at Pozieres when an artillery shell landed close nearby, and a steel splinter slashed into his lower back. Luckily, it missed his spine and his vital organs, but the damage was bad enough for him to be evacuated to England for treatment. He was passed fit and returned to action the following June, only to be hit in the right arm by a rifle bullet in September, 1917 during heavy fighting around the Belgian city of Ypres.

He was back in the line again by July 1918, as the Allied armies faced a last desperate offensive by the German forces. Then, near Amiens in August, Billy was hit a third time when another bullet smashed into his left leg, and the Battalion stretcher bearers were called to collect him once more.

Incredibly, in a conflict that had seen casualties on an unprecedented scale, Billy’s luck saw him through. The bullet had grazed a bone in his lower leg - causing a partial fracture – but the wound was a clean one and it ended his war. He was still undergoing rehabilitation when the guns fell silent at last in November 1918, and he was invalided home to Australia a month later.

For a long time afterwards, the awful toll of the war on the young men of Australia was reflected in a dearth of players for all sports. The Carlton Football Club was no different. There were plenty of opportunities at Princes Park for those with even modest talent in the post-war years.

In 1920, Billy Blackman trained with the Blues, and was selected for his first senior game in round 5, against South Melbourne at Albert Park. Wearing guernsey number 13, he played as a follower in a 19-point defeat. It was his only appearance for the year, but he was back the following April to enjoy a fruitful season.

Blues coach Norman Clark asked Blackman to play in the centre in 1921, and the 24 year-old hard nut responded with 18 solid games. Carlton finished the home and away rounds on top of the ladder, and put themselves in with a big chance of winning another flag when they beat Collingwood by 13 points in the second Semi Final. Blackman and winger Newton Chandler were both outstanding for Carlton in that victory, as were defender Paddy O'Brien and follower Rupe Hiskins.

The Blues then met Richmond in the following week’s Final, and in a sensational game, were trailing the Tigers by 13 points at half-time when a violent hailstorm swept across the MCG. The ground was flooded, and the second half was played in a quagmire. Despite having seven more scoring shots, the off-target Blues lost by 8 points, with Hiskins, Blackman, Bert Boromeo and Charlie Fisher rated Carlton’s best.

Although they were jubilant, Richmond couldn’t immediately claim the flag, because minor premiers Carlton were entitled to challenge the Tigers to a Grand Final showdown. Naturally, we wasted no time in doing just that. The weather was still miserable when the two sides clashed at the MCG the following Saturday afternoon, and the game quickly turned into a low-scoring slog. Richmond adapted to the conditions slightly better, and edged out the Blues by four points in a nail-biting finish. Blackman was valiant in defeat once more for the Blues, along with Boromeo, O’Brien, and rover Stewart McLatchie.

Billy was consistent again in 1922. He notched up 17 matches and celebrated his first-ever career goal when he split the big sticks against Collingwood at Victoria Park in round 3. Carlton wound up fourth on the ladder, and Blackman enhanced his reputation as a reliable big match performer when the Blues when suffered yet another narrow, heart-breaking loss – this time to Essendon - in that year’s first Semi Final.

Carlton fell into decline after that, slipping down the ladder to finish seventh in 1923 and 1924. Billy switched to guernsey 12 in 1924, and became a handy forward in the twilight of his career. He kicked a career-high two goals in Carlton’s 7-point defeat of Geelong at Princes Park in round 17, 1924, but that turned out to be his final appearance for the Blues.

When Billy hung up his boots for the last time after that game, he was joined in retirement by two other Blues who had also fought in the Great War; Rupe Hiskins and Stewart McLatchie.

Billy Blackman and Stewart McLatchie were Carlton's representatives in the Victorian team that played N.S.W. at the Erskineville Oval Sydney July 08 1922.

The Permit and Umpire Committee received 170 applications for field umpire, and over 200 for boundary umpires.
Former Carlton player W. Blackman was one of the Boundary Umpire applicants.
(Trove: Referee April 10 1929 p13)