Let me be clear at the outset - no Bluebagger expected a resurgent finals performance in 2018. Blues fans knew we were in for the long haul. With List Manager Stephen Silvagni being clear to all fans about the need for a rebuild, we knew it would take time. But equally no Bluebagger expected the misery of 2018 nor the Bad Luck that would follow us at every turn in this season. I'm not talking the draw; not a player mutiny; not anything off the field - thankfully the Blues administration kept a tight rein in the press and all Blues we wanted to keep stayed on at year end.

I"m talking injuries. Not necessarily season ending injuries, but ongoing, repetitive, frustrating injuries that would hit hard on Day 1 and keep on hitting.

And I don't just mean random injuries! Firstly, have a look at this wonderful schematic donated by the team at Bigfooty: 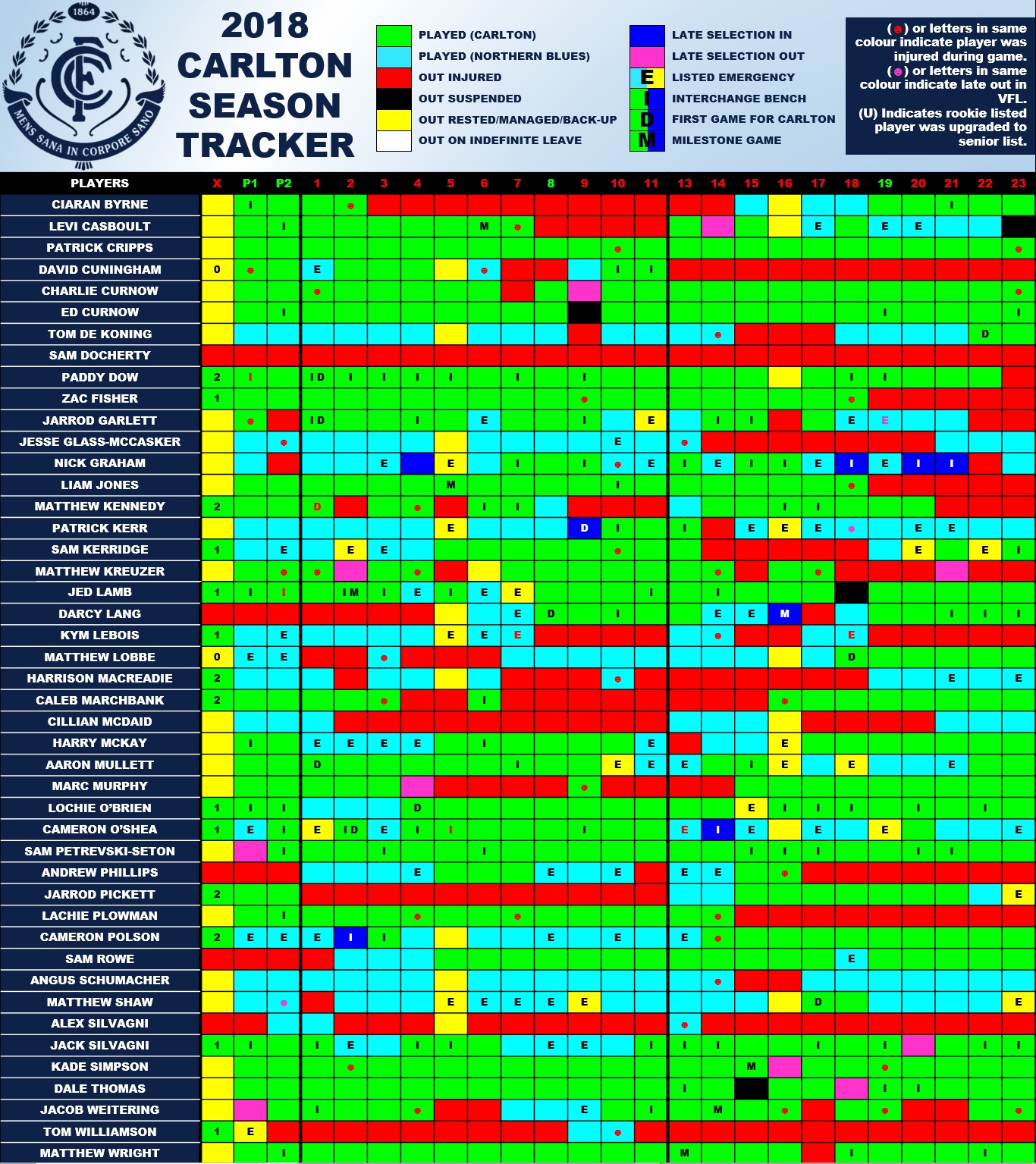 So, some key points:

1. Defence
Anyone who watched Carlton in 2017 knew that we were building a defence. A good one. In fact, despite a pretty weak midfield in 2017 we were the 13th best defence in the competition.

But as soon as our reigning All Australian Sam Docherty went down in the first week of pre-season it was all downhill for the back half. Then followed youngster Tom Williamson, who was a lock for the best 22 after his strong debut season. AFL stalwart Alex Silvagni threatened to enter the firsts on a few occasions before his achilles ended his year, and then his career, and youngster Harrison Macreadie whilst green was never fit enough after successive soft tissue injuries. That's 4 of our defensive 8-9 players who never got on the park.

In addition, spare a thought for Sam Rowe who was thrust back in to a key defensive role after 3 weeks at VFL level post ACL! Now normally ACL takes a while to get your rhythm back, let alone a few months.... but 3 weeks later Rowe was in. He performed admirably in some games, but an end of season rut saw him out and indeed off the list after 99 games.

Finally, young gun Caleb Marchbank was in and out with various injuries. The poor fella couldn't get a run at it.

When Jones was injured in Round 16 the defensive unit was formally and finally shot and we sought to reset for 2019.

As above, we aren't saying we would won the Flag. We aren't even saying we'd have won 8 games. But when he cornerstone of your team is broken, you are going to struggle.

2. The Mids
For very good list management reasons, the Blues traded / allowed home 200 gamer Bryce Gibbs. With this move, we gained two first round picks which secured hard running Lochie O'Brien and through other trades, effectively gained Matthew Kennedy and Tom de Koning. So it looked a good long-term result for the Blues and a great short-term move by the Crows. We all knew it would mean we were a prime midfielder short.

So when we lost Captain Marc Murphy pre-game in Round 4 - in addition to Sam Docherty pre-season, we were left with a midfield of man-mountain Patrick Cripps & Ed Curnow, plus kids O'Brien, Zac Fisher, Paddy Dow and Kennedy. When Kennedy went down in Round 1 we lost him effectively as well, despite many efforts to come back.

Cripps and Ed toiled beautifully all year, with Cripps coming 4th in the Brownlow. Otherwise, the first and second year mids gained wonderful experience but we were well short of the competition here.

3. The Forwards
The Blues did well through the tall forward line in 2018. Charlie Curnow continued to emerge and Harry McKay broke through.

However we lost all small forward pressure when Jarrod Pickett went down pre-season. Kym LeBois barely played VFL all year, and in the mighty fast AFL we lost all ability to contain the ball up forward. Cameron Polson was tried late in the season and had one breakout game in a sign of hope for the future.


4. Yo-yos
We've all seen it - a Blue comes back seemingly not quite right, and goes back down again. Blues Matthew Kreuzer, Marc Murphy, Matthew Kennedy, Marchbank and Jacob Weitering never really got going in 2018. Injuries clearly played a part in this.


All up, and as per the spreadsheet, the Blues fared poorly on the injury front. A post season fitness review saw a number of issues identified and the recruitment of Andrew Russell to head a newly restructured department.

1984 Rd 19 - Peter McConville battling it out with Frank Dunnell.