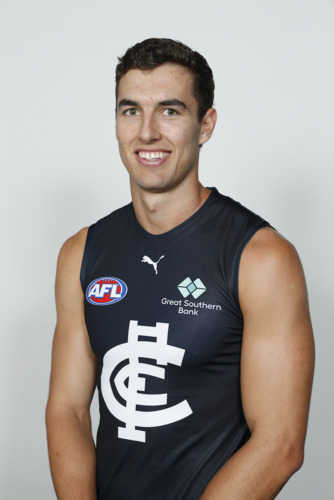 
One of 12 additions to the player roster at Carlton for 2017 is Tom Williamson, a 190 cm athletic midfielder-defender from the North Ballarat Rebels in the Under-18 TAC Cup competition. Selected at pick 61 in the 2016 national draft and allocated guernsey 31 by the Blues, Williamson is a fitness fanatic who produced outstanding efforts at the draft combine, finishing first in the agility test and second in the 3 km time trial.

During 2016 Williamson represented Vic Country in the national Under-18 championships, where his pace and elite endurance stood out. Upon hearing that Tom was on his way to Princes Park, one of his junior coaches, David Hosking, was quoted as saying; “Tom is always in top condition physically, his decision making is first class, and he just doesn’t make errors. He’s just so dedicated and so disciplined in his attention to detail and his fitness - he does everything right.”

He managed 15 games in his debut year in a super solid start to his career, remembering how late he was drafted. Unfortunately back injuries kept him out of the game in 2018 but he would return to the pre-season in supreme nick and ready to reclaim his spot in 2019.

With a new hierarchy at the Club in 2022, hopes were high that Williamson would reclaim his spot in the seniors and thrive under Voss. A med-sub position early on saw him register a game, without game time, before a run of solid form in the seconds appeared to see him in the 'top 25'. Unfortunately for Tom, it was announced in May he would be taking leave from the Club to deal with certain personal issues, and come July, with the Blues firmly in the 8, Carlton announced Williamson would not return. 44 games over 6 seasons and a lot of dash with that trusty left, but an early exit for Tom.

On July 16, 2022 Tom Williamson lines up with North Melbourne VFL side in their VFL Round 17 two point lost to Richmond at Arden Street. He was wearing number 51 and named on the wing. He had 13 disposals (6 kicks 7 handballs), 3 marks 2 tackles and 1 clearance.