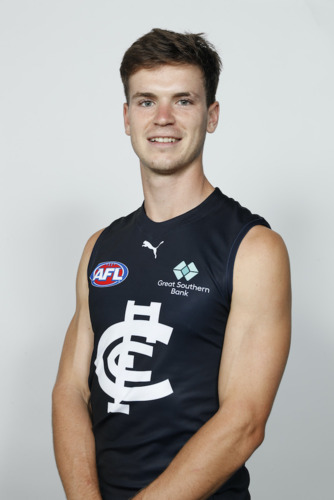 
Paddy Dow the pacy midfielder with pick 3 in the 2017 NAB AFL National Draft. Named in the U18 All Australian team this year, the Bendigo Pioneers product was a consistent performer in every match and competition he played this year – including the AFL Academy’s game against the Northern Blues. Not only can the 18-year-old burst through the midfield and create separation on his opponent, but Dow can also drift forward and be a threat around the goals. This talent was on display when he laced up his boots for Geelong Grammar, kicking seven majors in a single game. Unfortunately, his year was cut short by a shoulder injury, but not before showcasing his ability on the field. Carlton’s GM of List Management and Strategy Stephen Silvagni believes Dow will be an asset to the Blues midfield. “Paddy is explosive out of stoppages, so we’re really excited by what he can bring to our midfield,” Silvagni said. “He was a consistent performer throughout the year, and he has also got a great character, so he’ll fit in well at Carlton.”

Paddy Dow's grandfather Peter played two seasons with Nth Melbourne in 1959 and 1961 as a ruckman / centre-half forward who managed to play 18 games.

Dow made his debut in the opening round of the 2018 season in front of 90,000 spectators, and before season's end had amassed 20 games in hie debut year. His skills and time-and-space definitely caught the eye, and with our injury issues through the year, Dow spent a considerable amount of time on the ball learning the ropes. Dow finished the year with the most clearances of all Rising Star Nominees in the competition with 52.

Paddy's younger brother Thomson Dow was drafted by Richmond with the 21st pick in the 2019 National Draft.