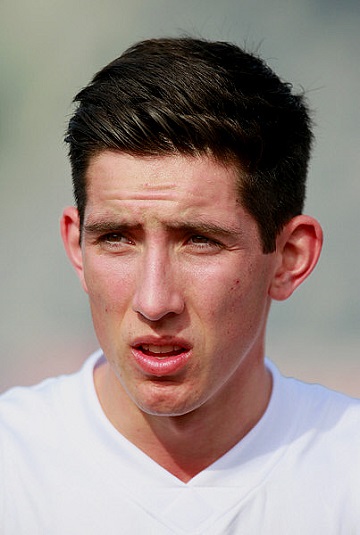 Carlton added a fourth number 1 draft pick to their 2016 playing list (joining Marc Murphy, Bryce Gibbs and Matthew Kreuzer) when the Navy Blues chose 18 year-old Jacob Weitering with the club’s first selection in the 2015 National Draft. Already an imposing 194 cm and 94 kg, the key defender from Mount Eliza via the Dandenong Stingrays had captained Victorian Country to the Under-18 National Championship earlier that same year, averaging eight marks per game and winning All-Australian selection.

Jacob was always going to be snapped up at pick one in the draft, given his size, his outstanding skill-set and his leadership potential. Despite his tender years, he already knew how to impose himself on matches and direct those around him. Clean, vice-like hands, a penetrating right-foot kick and an uncanny ability to intercept opposition passes proved that that he was more than ready for AFL football from Carlton’s first game of the season. The Blues began the year poorly, and were yet to win when Jake’s 26 possessions and nine strong marks saw him nominated for the 2016 AFL Rising Star award in Carlton's round 3 defeat by the Gold Coast Suns at Carrara.

Eventually, the drought broke with a win in round 5 against Fremantle at Subiaco Oval, followed by another emphatic victory over Essendon in round 6. The latter came at a cost however, when Weitering damaged his right shoulder in a heavy collision during the second quarter. Scans later confirmed a partial dislocation, and at first he was expected to be sidelined for 3 to 6 weeks. Instead, he came back into the side after missing just a fortnight - with heavy strapping on the damaged joint that he wore for the rest of the year.

Jacob was hurt again in the early minutes of Carlton’s round 17 match against West Coast at the MCG, when an opponent’s knee crashed into his right calf. After limping off the field for 20 minutes of treatment, he was sent back on to play as a marking forward and showed his class by kicking the first and second goals of his career in a 7-point defeat. The Blues then staggered to a 14th place finish on the ladder, losing 11 of their last 12 games – but Weitering provided a beacon of hope with his excellent first 20 games of senior football. He was a worthy winner of Carlton’s Best First Year Player Award, then gladdened the heart of every Bluebagger when he signed a contract extension that will keep him at Princes Park until at least 2021. Weitering was rewarded for his great debut season with selection in the AFLPA 22Under22 team as Full Back.

22 games in 2017, including many up forward as part of his AFL apprenticeship, was a solid output as the Blues appeared to 'hold firm' in the AFL. Alas 2018 was a shocker for most and Weitering suffered, like everyone else, from form and fitness with only the 14 games. He managed his 50th and going in to 2019 has us all behind him in hope for becoming the mainstay defender we need.

Weitering took his game to another level in season 2019 and ended the season keeping All Australian Full Forward Tom Hawkins goalless in the final round of the season. He was rewarded for his outstanding season with his second selection in the AFLPA 22Under22 Team, named at Centre Half Back.

Weitering continued to progress his game in 2020, blanketing the majority of the competition's best forwards to either no goals or minimal goals. This form saw him rewarded with inaugural selection in the All Australian Squad of 40 however was very unfortunate to miss out on making the final cut of 22. His outstanding season was acknowledged by his teammates with nomination for the AFLPA MVP award.

Weitering continued his outstanding form through 2021. In Round 7, 2021 vs the Western Bulldogs, he equalled their club champion Chris Grant's AFL record of most contested intercept marks in a match with 7 as well as equalling the club record for most contested marks overall in a single match by a Carlton player. He ended the year by breaking the club record for most rebound 50s in a season & finishing first in the competition for most one percenters. He was rewarded for his efforts with a 2nd consecutive nomination in the All Australian Squad of 40.

1983 Warren Ralph to stay in WA for the season.