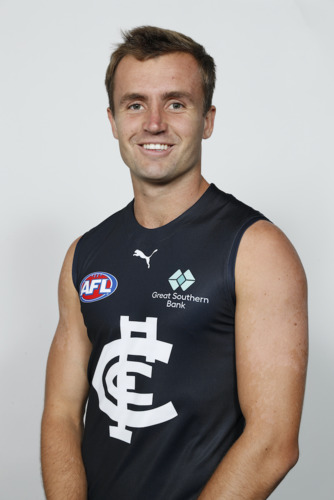 
The Blues drafted young midfielder Lochie O’Brien to the Club, selecting the Bendigo Pioneers product with pick 10 in the 2017 NAB AFL National Draft. Known for his exceptional endurance, the pacy left footer came second in the 2km time trial at the AFL Draft Combine, recording 6:12 minutes – just three seconds behind the winner. A good decision-maker who possess an elite kick, Blues fans will want the ball in his hands as he runs along the wing breaking the lines to set up his teammates. Carlton’s GM of List Management and Strategy Stephen Silvagni said O’Brien knows how to play to his strengths. “We actually know Lochie quite well, he did his AFL Academy club week at Carlton and travelled to the Gold Coast with us on our pre-season camp last year, so we know he’ll fit in at the Blues,” Silvagni said. “He’s an excellent athlete who has a good combination of speed and endurance, and importantly he knows how to use this to his advantage.”

Lochie O'Brien's grandfather Denis O'Brien played with arch-rival Collingwood, he won their reserves best and fairest in 1970 and played a single game in 1971. O'Brien decided to head back to his local club Greensborough in the Diamond Valley FL where he was later named in their Team of the Century.

In the midst of a horrible opening season for the Blues, O'Brien stayed fit and ran all day and knocked up 18 games in a strong opening year.