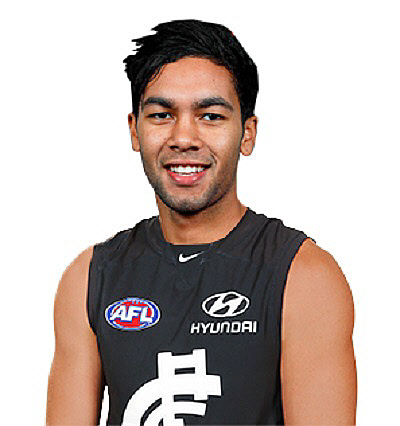 
Eighteen year-old South Australian Kym LeBois inherited Carlton’s number 42 guernsey when he was the Blues’ first selection at number 5 in the 2016 Rookie Draft. A quick and clever left-footed small forward with an outstanding football pedigree, LeBois now seems set to add his name to the honour roll of players with aboriginal heritage at Carlton.

Three of LeBois’ uncles; Gavin Wanganeen, Aaron Davey and Alwyn Davey all played AFL football. Wanganeen was a champion who won the 1993 Brownlow Medal and celebrated Premierships at Essendon and Port Adelaide. Kym meanwhile, grew up in Ceduna and played senior football for the Koonibba Roosters at the age of 15. Two years later he joined North Adelaide in the SANFL, before representing SA at the 2016 National Under-18 championships.

Despite suffering from knee tendonitis during the championships, LeBois played in all four games with his knee strapped, and kicked some opportunist goals. He wasn’t selected in the National Draft, but SA talent manager Brenton Phillips wasn’t surprised when he was picked up by the Blues and offered a rookie contract. “He (Kym) probably had a disappointing finals series. He really didn't shake it up as much as we hoped he would. But he has moments of brilliance in games, in terms of kicking goals that you don't see coming. I almost put him into the category where he only needs eight or nine touches a game to really help put sides away,” he said.

Those comments rang true in LeBois’ first appearance for the Blues in a pre-season match against Melbourne at Casey Fields in February 2017. Early in the first quarter, LeBois took a handball in the middle of a pack deep in Carlton’s left forward pocket, and, with his first kick as a Blue, curled through a sensational left-foot goal from a near-impossible angle. At the conclusion of the 2019 season LeBois was delisted by the Blues.

From the moment of his arrival at Carlton, confusion arose as to the proper pronunciation of Kym’s surname. While obviously French, and therefore “LeBwa” Kym was adamant that he preferred “LeBoys,” so the club complied.

Blues run out in MandM guernsey.jpg