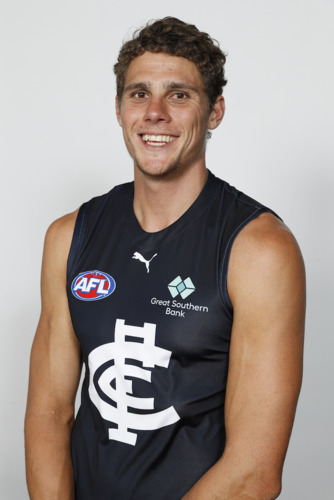 
The youngest brother of Blues midfielder Ed Curnow, Geelong Falcons star Charlie Curnow was somewhat fortuitously drafted by Carlton at selection 12 in the 2015 National Draft. The versatile tall had been tipped to go as early as number 3 prior to draft day, until an unfortunate brush with the law scared a number of clubs away and allowed the Blues to swoop.

Charlie endured a lot of setbacks during 2015, beginning with knee and quadricep injuries during the pre-season, and a dislocated kneecap that sidelined him for 12 weeks. As a result, he missed playing in the Under-18 National Championships and for a while it seemed that he wouldn’t play again that year. However, his determination got him back on the field for the Falcons’ final five TAC Cup games. After impressive efforts in defence or in the ruck earlier in the year, he was sent forward on his return and kicked 13 goals, averaging 12 disposals and six marks per game.

After that, list managers from just about every AFL club were clamouring to talk to him and it seemed inevitable that he would be among the very early draft selections. But only a few days before the draft was held, Curnow was arrested for being drunk in a public place and refusing a breath test. Suddenly, his prospects had been dealt a heavy blow. Within hours he faced the media saying, “I made a terrible mistake. It's something I deeply regret, and it's something that I am going to have to deal with.”

Consequently, Melbourne, Essendon and Gold Coast were among the clubs that seemed to go cold on Charlie when the draft got underway, and when he was still available at number 12, the Blues snapped him up. “I have known the family for a long time, and coached Ed back in my Box Hill days,” Carlton coach Brendon Bolton said afterwards. “They're a terrific family, and Charlie is a terrific person who has made a mistake. We want him to just get into the footy club, roll his sleeves up and work really hard. He's not a bad person who has made a bad mistake.”

Bolton’s entreaties struck a chord with Curnow, and after an intense pre-season, the 19 year-old wore his newly-acquired number 30 guernsey into a senior match for the first time when Carlton met Sydney at Docklands Stadium in round 2, 2016. Although the Blues were comprehensively beaten, Charlie’s 11 possessions and 4 marks – the last of which produced his first career goal – made for an encouraging start. He played the next three games in succession and was just starting to look comfortable when he was struck down by a bout of glandular fever. After recovering, he damaged an ankle in a VFL game, and it was mid-July before he was recalled to the senior side.

Then, midway through the third quarter of his sixth game - Carlton’s round 18 match against Sydney at the SCG - Charlie's team-mate Levi Casboult fell against his right knee in a marking contest. Blues’ fans shuddered as Charlie was helped from the ground, but it was later revealed that the damage was not as severe as first feared. He had strained a medial ligament, costing him another 4 to 6 weeks in rehab, and bringing a premature end to his debut season.

After a month of brilliant form in the mid part of the 2017 season, Curnow was finally rewarded with a Rising Star Nomination in Round 16 for his effort against Melbourne consisting of 19 disposals at 79% efficiency, 10 contested possessions, 10 marks, 4 contested marks, 3 marks inside 50, 4 tackles and 2 goals while playing at centre half forward. It would be a club record 5th Rising Star nomination for the season, and equal 2nd most in AFL history behind Greater Western Sydney's inaugural season in 2012 when loaded with a raft of early draft picks & concessions. He was rewarded with selection in the AFLPA 22Under22 team in the Centre Half Forward position.

Curnow continued to take his game to a new level in 2018 & finished the season with his first Leading Goalkicker Award. He was also ranked 1st at the club in contested marks, 1st in marks inside 50, 2nd in total marks & 3rd in inside 50s. He was again rewarded for his great season with his 2nd consecutive selection in the AFLPA 22Under22 team in the Centre Half Forward position. 34 goals aside, his leadership on the field and desire for the ball sets this young man apart, and big things await in 2019...