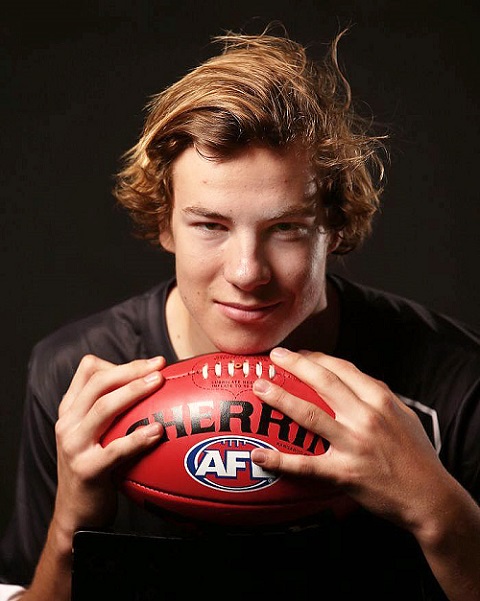 Carlton augmented the clubs’ arsenal of big men by drafting 200 cm ruckman-forward Harry McKay with the Blues’ second selection (number 10) in the 2015 National Draft. McKay was still just 17 on draft day, when he and his twin brother Ben (who went to North
Melbourne 11 places after Harry) were both recruited by AFL clubs.

The McKay twins began their journey to the AFL at Warragul and St Paul's Anglican Grammar School in central Gippsland,, before being invited to join the Gippsland Power in the elite TAC Cup Under-18 competition. Ben briefly dropped out of the program early in 2015 (only to return a few months later) but Harry remained and kicked four goals on debut against the Dandenong Stingrays. As the season progressed, so too did Harry, and it wasn’t long before he was being talked about as a likely first round draft pick – especially after some impressive cameo roles for Vic Country on the way to their National Under-18 Division 1 Championship triumph.

At the championships, Harry spent most of his game time as a marking target up forward, where his aerial skills and athleticism posed constant problems for opposition teams. Quick off the mark and a powerful left-foot kick, he was also sent into the ruck in short bursts, where his sure ball-handling and willingness to run both ways stood out.

Over the summer of 2015-16, McKay trained impressively with his new club, and was given a glimpse of what could lie ahead when he played in Carlton’s pre-season NAB Challenge match against Essendon at Princes Park in late February. Only a few weeks later however, he suffered a stress fracture in his lower back, and in April he was placed on the long-term injury list. Although he returned to the field with the Northern Blues in time to play the last six games of the season and he was never a real possibility of gaining senior selection after such a long lay-off.

McKay took his game to another level in 2019 with a blistering start to the season in which he was leading the competition in contested marks until he was sidelined with a groin injury after the Round 14 bye. He finished the season 3rd in this stat and was rewarded for his great season with his inaugural selection in the AFLPA 22Under22 Team, named in the Forward Pocket.

The 2021 season saw Harry McKay claim Carlton's first Coleman Medal since Brendan Fevola in 2009 as well as his third straight Club Leading Goalkicker Award. McKay managed to top the AFL goalkicking despite missing 3 full matches with injury & being subbed out early with concussion in another match. He also lead the competition in highest average contested marks & marks inside 50 per match. McKay managed all this while nursing a high grade AC joint injury throughout most of the season which he was often visibly distressed by and had his season cut short to have surgically repaired. His efforts were rewarded with his inaugural selection as the Full Forward in the All Australian team.