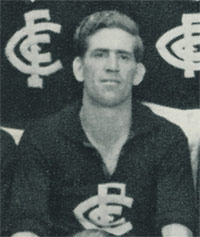 A volatile player with considerable football skill, Rod McLean was Carlton’s front line ‘protector’ in our pre and post-war Premiership teams of 1938 and 1945. Throughout the harsh years of World War II, when physical intimidation was an integral part of VFL football, McLean, Bob Chitty and Ron Savage were the Blues’ renowned hard men.

Although he was barely a ‘six-footer’ at 183 centimetres, McLean packed 84 kilograms into a solid frame that was used with telling effect on any opponent unwise enough to get between him and the football. His tough work in the packs - shepherding, tackling, blocking and clearing a path for his team-mates - was complemented by strong hands, a powerful kick, and relentless determination.

After arriving at Carlton from northern suburbs club Fawkner in 1935, McLean took a couple of seasons to establish himself in the senior team. But by 1938, when former South Melbourne champion Brighton Diggins moulded the Blues into a Premiership side at last, and the Navy Blues beat Collingwood by 15 points in front of an enormous crowd of 96,000 at the MCG, McLean and promising recruit Bob Chitty had already added starch, as well as a touch of mongrel to the Blues. In addition, the emergence of Ron Savage in 1939 provided another piece of heavy artillery for Carlton’s ruck arsenal, and set the Blues up nicely for the torrid battles ahead.

In the wake of the 1938 flag, Carlton slipped to fifth place the following year. In September 1939, just as the finals were getting underway, the country was rocked by the news that Great Britain had declared war on Germany, and that as a result, Australia was also at war. Those events signalled four lean years for VFL football, when players in their droves signed up for military service. Although McLean was among the early volunteers, he was deemed to be in a reserve occupation, and therefore was able to continue playing for the Blues throughout the conflict.

He did however miss the entire 1943 season, after some ugly incidents in Carlton’s round 16, 1942 match against Richmond at Princes Park. Games between these two bitter rivals were almost always willing physical clashes, and this one was no exception. Carlton came out on top with an emphatic 52-point victory, but the celebrations were soured by two reports – Frank Anderson for striking, and Rod McLean on three serious charges of disputing the field umpire’s decisions, unseemly conduct, and abusive language. Anderson was cleared by the tribunal, while McLean’s charges were all sustained. Rod was suspended for 16 games, which effectively ruled him out for all of 1943.

Happily, he came back in 1944 a better and wiser player. While he was still never prepared to turn the other cheek, McLean from then on made the football his primary target on the field, and the Blues reaped the benefit. He played 17 of a possible 18 matches as Carlton finished fifth in 1944, and set themselves for a real tilt at another flag.

In the years since Carlton’s seventh VFL Premiership victory in 1945, the heroic efforts of that team have been overshadowed by the sensational Grand Final that decided it. But it should always be remembered that the Blues began that season with three straight losses – the third by a record margin – and were faced with the Herculean task of winning at least 16 of the remaining 17 matches to snatch the flag. That they did so, after the most violent and sensational final series ever played, is a football saga.

It began when Carlton snatched a last-minute finals berth with a 53-point win over Footscray at the Western Oval in the final round of the year. Ron Savage and Rod McLean were standouts for the Blues around the packs, and kicked five goals between them. That set up a Semi Final clash with North Melbourne that was never really a contest after Carlton kicked five unanswered goals in the first quarter. Captain Bob Chitty was impassable at half-back for the Blues, and full-forward Lance Collins kicked eight majors.

Carlton’s next opponent was Collingwood, in a Preliminary Final that was portent of the events to come. Collingwood moulded their team around an aggressive part-time ruckman and on-field enforcer in Len Hustler, who tried hard to unsettle the Blues and turned the match into a vicious, rolling brawl. The Magpies had the match in their keeping early in the final term with a lead of 45 points, before Savage, McLean and rover Jim Mooring combined to take complete control in the ruck. Carlton then stormed home, kicking seven goals to nil for a ten-point win, and knocking down the door to a Grand Final match-up with minor premiers South Melbourne.

The reasons why the 1945 ‘Bloodbath’ Grand Final erupted into mayhem on the football field have been discussed by historians and experts in all sorts of fields ever since the final siren sounded on that Saturday afternoon at Princes Park more than fifty years ago. Carlton came out victorious by 28 points, while ten players were placed on report, and hardly anyone from either side was not battered or bruised in some way.

What is clear is that the most influential player on the ground was Carlton’s inspirational captain Bob Chitty. Bloodied, concussed and defiant, he led a team that would not be beaten by fair means or foul. And when football was forgotten and tempers flared, the Southerners reaped the whirlwind. Among the culprits, Chitty ended the day on report for elbowing South’s Billy Williams, and Ron Savage went up for striking Don Grossman. More than one observer noted however, that South’s players were regularly sent cartwheeling to the turf when Carlton’s vice-captain Rod McLean was in close proximity. By then Rod was more discreet however, and much more selective in choosing his targets, so he escaped the notice of the single field umpire.

As a result of their transgressions, Bob Chitty and Ron Savage were both suspended for eight weeks after the Grand Final, while wingman Fred Fitzgibbon copped a total of seven matches for incidents in both the Preliminary and Grand Finals. In Chitty’s absence, McLean took over as acting captain in 1946, but the severely weakened Blues couldn’t regain any consistency, and trailed away to finish up in sixth place on the ladder.

McLean’s senior football career actually wound up before that season concluded, because he called it quits in July, following the Blues impressive defeat of Hawthorn in a round 14 match at Princes Park. Rod led Carlton’s rucks for the last time on that cold and showery afternoon, with Ken Hands and Jack Conley in support. The match was even for three quarters, before Carlton slammed on six unanswered goals in the last term, and won by 37 points. Hands kicked five goals and Conley three, to send McLean off on a well-deserved winning note.

In later years Rod served on the Carlton committee in a variety of positions, including Chairman of Selectors. Then, in 1966, his son Roderick ‘Ricky’ McLean joined the Blues and soon showed that he had inherited plenty of his father’s strength and tenacity. A powerfully-built specialist full-forward, Ricky played 19 games in a long stay at Princes Park between 1966 and 1972, before crossing to Richmond to play in the Tigers’ 1972 Grand Final team that was so spectacularly beaten by the Blues.

In turn, Ricky McLean’s nephew - and Rod's grandson; Brock McLean, was recruited by Melbourne in 2004. After 94 games in 6 years for the Demons, Brock made headlines when he was picked up by Carlton in a high-profile trade prior to the 2010 season.

The McLean family lost the doyen of their clan, and Carlton lost a true warrior, when Rod passed away on the 14th September, 1979, aged only 63.

Articles: Every Picture tells a story - Signatures from 1935