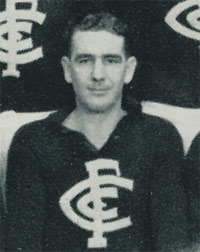 
A brilliant, straight-kicking forward who twice scored 100 goals in a season for VFA club Coburg, Lance Collins crossed to Carlton in 1942 when wartime restrictions forced the Association to suspend their competition. In 1943 he was inducted into the AIF, and spent two years in uniform before returning to Princes Park in time to be one of the prime movers in Carlton’s fabled drive to the 1945 Premiership – the infamous ‘Bloodbath’ Grand Final. In the first few minutes of that sensational match however, Lance suffered a serious ankle injury, and took little further part in proceedings.

Born in the tiny hamlet of Beulah in north-western Victoria, Lance Kitchener Collins announced his arrival as an elite football talent in 1936, when he kicked 116 goals at full-forward for Coburg. A fine athlete with a big leap and strong hands, he was a precise kick for goal, and a deadly snapshot on the run. By 1939 he was fielding offers from Carlton and other VFL clubs, but stayed loyal to the Lions and topped the ‘ton’ for the second time, as World War II erupted in Europe. Coburg rewarded their star forward’s loyalty by appointing him captain-coach, and in 1941 the Lions went all the way to the Grand Final, only to fall to Port Melbourne by 19 points. The VFA then suspended their competition for the duration of the war. Lance then joined the many Association players who were enlisting for active service. While training with the Militia (Army Reserve) and facing an uncertain future, he finally agreed to play for the Blues in 1942.

Lance made a solid, if unspectacular start with his new club, playing nine games and kicking 13 goals as Carlton finished fifth on the ladder in his debut year. The Blues’ wily coach Percy Bentley soon saw Collins as more than a capable and dangerous full-forward however, and late in the season swung him into the centre, where his endurance, anticipation and accurate foot-passing was an asset. When the 1943 VFL season got underway, Bentley shifted Collins to a half-forward flank. By then settled in at his new club, Lance hit a rich vein of form. His 16 goals in the first seven matches of the year had his coach and all Carlton supporters smiling – at least until mid-season, when Collins was called into uniform at last.

Lance’s army service took him away from football for almost two full years – from June, 1943 until the end of hostilities, in May 1945. When he did eventually return to Princes Park, he certainly made up for lost time. Alternating between the flank and full-forward, with occasional stints at centre half-forward, he played a string of great games, including hauls of five goals against Essendon in round 14, seven against St Kilda in round 16, and four against Collingwood in round 19, as Carlton made a late run at a finals berth. Eventually, the Blues beat Footscray in the last match of the 1945 home and away rounds to snatch fourth place on the ladder, and set the scene for one of the most courageous - and certainly one of the most controversial – Premiership victories of all time.

In early September, Carlton met North Melbourne in the first Semi-Final at Princes Park, and stamped their authority on the match in the first quarter by kicking five goals to North’s none. Four of those five majors came from the boot of Lance Collins, who was unstoppable all day at half-forward, and steered through eight goals for the match. The following week’s Preliminary Final against Collingwood was a brutal, physical clash that seemed destined to end in heartbreak for the Blues when the Magpies led by almost five goals at three-quarter time. But sparked by their inspirational captain Bob Chitty, Carlton rallied to pile on seven goals in the last quarter, and won by ten points. That win was built on courage and self-belief, topped off by another fine four-goal effort by Collins.

The 1945 Carlton – South Melbourne Grand Final was dubbed the ‘Bloodbath’ in the aftermath of one of the most violent episodes in VFL/ AFL history. The reasons why the match exploded into open warfare have been debated ever since, but when a mammoth crowd of more than 62,000 packed Princes Park on September 29, 1945 many of them were expecting fireworks.

The Blues began the match well, winning the early ruck duels and scoring the first goal when full-forward Ken Baxter led out to mark a neat pass from Collins. Carlton’s second major came from rover 'Mickey' Price, whose long bomb cleared the pack and bounced through at the Lygon Street end. In the goal-square, Collins flew for the mark but landed awkwardly, and collapsed in pain as he tried to stand. In a big blow to the Blues, he had torn an ankle tendon, and though he gamely tried to continue with his leg tightly strapped, he was a passenger from that point on. He was replaced at half time by 19th man Charlie McInnes.

From early in the second quarter, there were passages of brilliant football from both sides, although the match was thereafter marred by a series of running brawls where fists, elbows, knees and sometimes boots were indiscriminately used. Carlton eventually won the fight and the flag, while nine players were reported in the aftermath, and a total of 68 weeks of suspensions were handed out. The violence of the game may have grabbed all the headlines, but in the end, the 1945 Premiership was a triumphant victory against the odds for the Carlton Football Club, and one that will be forever celebrated at Princes Park.

Although he was prevented from contributing much on that sensational day, Lance Collins was a star throughout 1945 Carlton’s finals campaign, and his contribution should never be underestimated. Lance left Carlton after that sensational culmination to his VFL career, taking up a lucrative offer to coach the newly-formed Sandy Bay Football Club in the Tasmanian Football League – with instant success. In just their second season, the Seagulls won the Premiership and Collins was an instant celebrity. In his second and last season in the Island State, Lance won the TFL goal-kicking award with 50 majors, before heading back across Bass Strait to captain-coach Golden Point in the Ballarat & District League.

There, according to respected football author John Daffey, there is strong evidence that he perfected the banana kick. Old-timers at Ballarat’s Eastern Oval were adamant that Collins used to bend the ball during the late forties, at least a couple of decades before it was seen in the VFL. On one celebrated occasion, in a finals match at Ballarat’s home of football, Collins brought the house down when he curled one through from the boundary line deep in the forward pocket, right in front of a packed main grandstand.

Lance Collins passed away on the 3rd January, 1988, aged 71. His career tally of 432 goals from 98 matches still stands as a record at Coburg, more than 70 years after he played his last match for the team now known as the Coburg Tigers. He is a member of the Coburg Hall of Fame.

Footnote
During his last year at Coburg in 1941, Collins often shifted himself out to half-forward to allow former South Melbourne champion Bob Pratt a free rein at full-forward – with spectacular results.
Pratt kicked 183 goals for the season, and Collins added 73, as the Lions roared into the Grand Final against Port Melbourne at the MCG. But in a shock result, the Borough triumphed by 19 points, in their first win over the Lions since 1929.

Lad of 19 Is Among Goal Records